This article was published on December 31, 2012

The Obvious Co.-backed habit forming app Lift has gotten a nice update today in preparation for the new year. Specifically, it’s gained the ability to Remind you of your specific goals and habits using push notifications.

If you’re unfamiliar with Lift, you can check out our review of the app here. It’s a project that we found intriguing, but that the team of seven has been rapidly iterating on since we first looked at it. The company was co-founded by Tony Stubblebine of Crowdvine and Jon Crosby of Path, in partnership with Obvious Co., a project of Twitter co-founders Biz Stone, Evan Williams and Jason Goldman.

Lift received Series A funding led by Bijan Sabet at Spark Capital, who also joined their board. Other investors in the round include SV Angel, Adam Ludwin from RRE, as well as GTD author David Allen, speaker Tony Robbins and Emmy winning director Greg Yaitanes. Tim Ferriss, Narendra Rocherolle of Smile and Jeremy LaTrasse of MessageBus participated in the seed round along with Obvious. 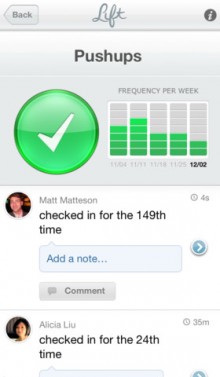 In keeping with the pedigree of the project, these aren’t just regular push notifications. CEO Stubblebine and the rest of the team have cooked up something special. The notifications, which are tied to both milestones reached and reminders to keep up on your goals, are delivered based on a series of signals.

Instead of the typical ‘blunt instrument’ approach to push notifications, Lift will use data about how much you interact with the notifications, or ignore them, to back off or press on with messages to you. If you actively engage notifications a lot, you’ll get them on a regular schedule. If you ignore them or delete them without triggering, they’ll back off so you don’t get overwhelmed. Stubblebine mentions the way that LinkedIn has started to track email openings and interactions religiously to back off the amount that they send as an inspiration.

Here’s an example of one of these programmatic push notifications, as received by Obvious partner Jason Goldman:

Stubblebine shared the company’s roadmap in a Quora thread explaining what they’re working towards with improving the app. It’s a set of cards that tracks high-level product decisions, which are then broken down into more detail with software tracking.

Among the list of items on the board are Twitter Sharing, which was added to the app in an update late last year. Others include fixing timezone bugs, a social graph based on other criteria than simple sharing networks like Facebook and Twitter, and the big update for this release: Reminders.

As mentioned above, those Reminders are delivered via push notification, but they’re done based on intelligent signaling, versus a timed schedule. The process is all about increasing the signal-to-noise ratio of the messages coming from Lift. If you’re an active user who wants constant communication, it should automatically give you that. If you’re a more casual user, you won’t get bombarded with them.

As push notifications become a major way that our apps communicate back with us, it’s more important than ever that they get more intelligent. Gone are the days where you just pounded them out on every event. People are inundated with messaging and the last thing they needs is another noisy channel.

If Lift can intelligently discover how willing you are to read and act on messages, it can deliver them more effectively. It’s a clever idea and one that I think is a long time coming.

These reminders were the number one request for users of Lift. Stubblebine says “…we’ve been holding off because we don’t want to build an automated nagging service.”

He says that there are two ways that they’re preventing this from happening with this update. 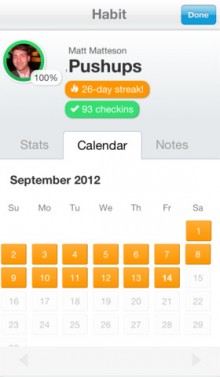 “One, we frame things positively or informationally (without being cheesy). Two, we use exponential back-off which avoids the problem of being a nag (and the more concrete effect, which is that you develop a habit of ignoring your habits).”

In addition to Reminders, you’ll now be able to browse your habits via category, see trending habits that people are working on building and see a set of the most popular New Year’s Resolutions.

Stubblebine says that one of the most popular ways that people were sharing was by leaving specific tips on how to achieve a goal. Now, there’s a dedicated comments feature that allows people an official place to do that, rather than shoehorning them into the habit entries.

There is also now Twitter sharing, a better ability to find friends including follow buttons on profiles and streaks are shown throughout the app.

The Reminders and other features will be turned on remotely in the app, and no update from the App Store is necessary to take advantage of them. Now it’s just a matter of seeing whether they work as advertised.

Disclosure: This article contains an affiliate link. While we only ever write about products we think deserve to be on the pages of our site, The Next Web may earn a small commission if you click through and buy the product in question. For more information, please see ourTerms of Service.