We all know that the economy isn’t doing that great and that there are fewer jobs than we’d like. But, there is some good news on the job front: remote jobs, or rather those jobs that can be done just by working remotely via the Internet, look to be rapidly increasing.

According to oDesk, an online workplace, a recent study of companies indicates that online work boosts the overall job market and that more contractors will work online by 2020. This study asked 2,839 businesses of the 482,000 that oDesk works with to help hire online workers evaluate their experiences and explore their predictions for hiring in the future. 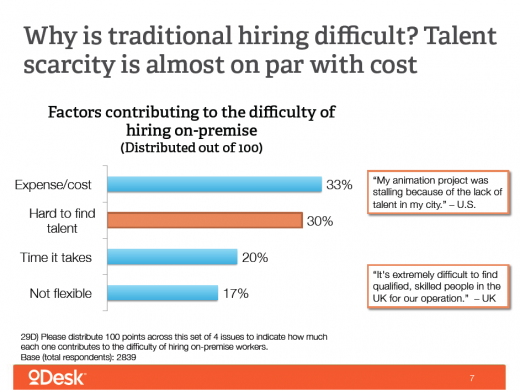 For many businesses, talent is the biggest lever to its success, but also a pain to access. Respondents mentioned that traditional hiring methods are “painful”– there is more demand than supply in some industries and spending precious resources bidding for a specific individual can be draining. However, when it comes to using online workers, companies felt that the online hiring process is less stressful and even helps make business more competitive and successful.

The study found that when you have online work, it allows the business to be more competitive (88% agree), launch products faster (85% agree), and grow revenues (80% agree). This could possibly be related to the fact that with online work, they’re focused entirely on that project, not a variety of projects a traditional worker might be responsible for.

The key findings from the oDesk survey indicate that:

oDesk CEO Gary Swart said, “Businesses that have tried hiring and managing workers online are voting with their wallets for the workplace of the future, in which blended teams of on-premise and online workers come together to get results.” No longer are companies resigning themselves to hire the best candidate locally — they understand that to get the very best, they’re going to need to look beyond their location.

The economy is definitely being affected as a result of this movement. But while you might think that online work will be mainstream, Swart feels otherwise. Their study shows that it’s going to bring about a “lift” to the economy. 83% of businesses indicated that they would not have hired locally if online workers were unavailable. Rather, they would have extended working hours or cancelled entire projects. 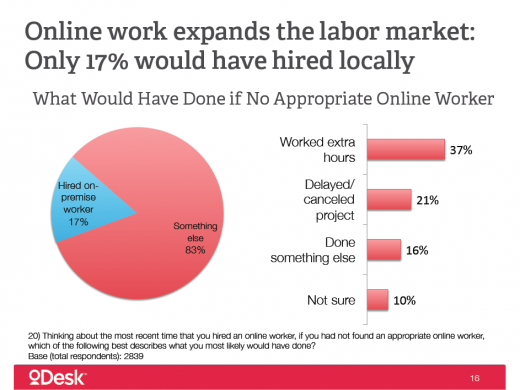 Swart told TNW about one case where a designer in Texas started to seek work through oDesk. Initially he started off as a web designer doing work at $15 per hour. When he was recognized for being pretty good, his rate went up and he quickly stair-stepped his way to $90 per hour, accumulating more clients. Eventually, he decided to start his own business and it’s estimated to receive $1 million in revenue this year.

So what lies ahead for online work? The majority of contract workers will be online (86% agree) and by the end of this year, it will be a $1 billion industry where 1 in 3 people will work online compared to on-site because of the challenges in hiring talent.