I spent the last few months with nearly every room in my home lit up by Monster‘s gorgeous IlluminEssence lighting. As a result, I have no further use for ordinary bulbs.

These aren’t the first LED lights I’ve tested out, but they managed to find the perfect mixture of quality, brightness, ease-of-use, and cost. Plus, Monster’s managed to put together several different kits that make the IlluminEssence line up incredibly easy to navigate. 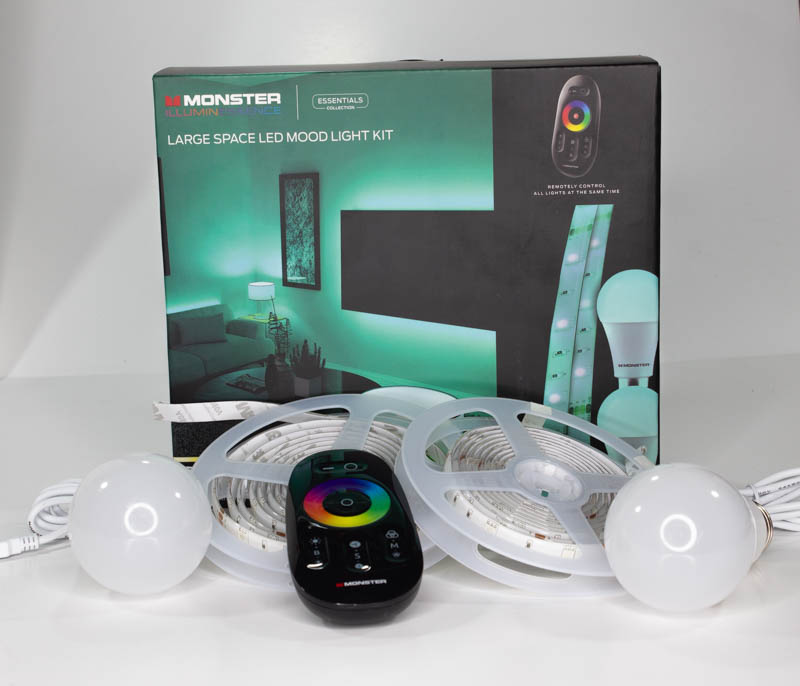 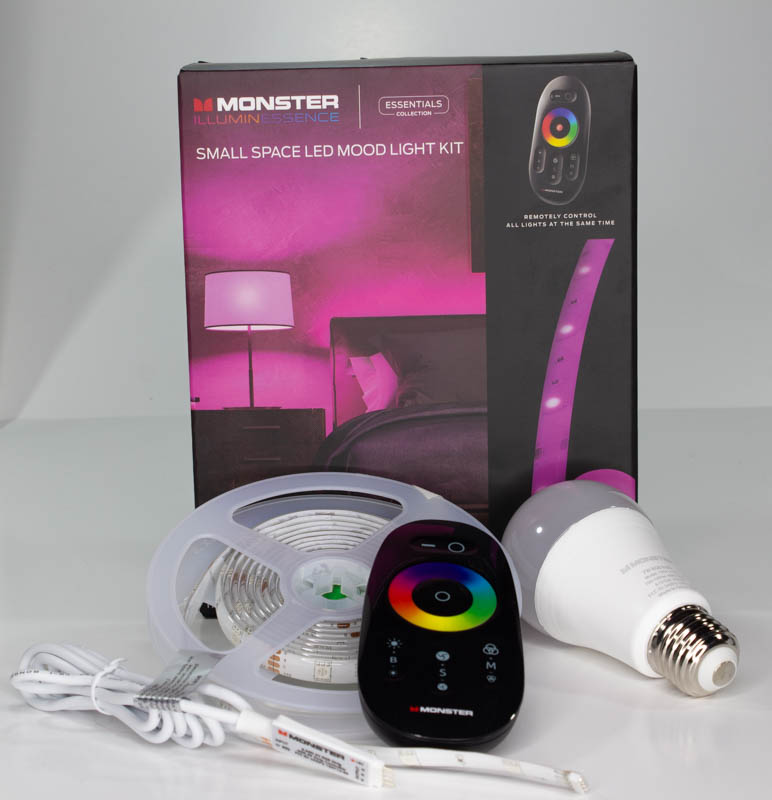 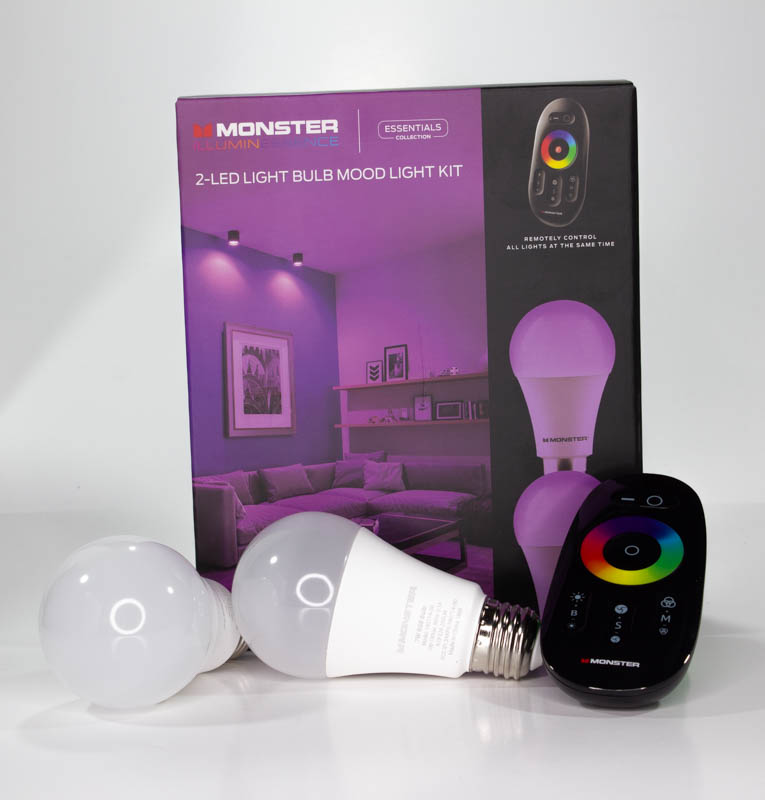 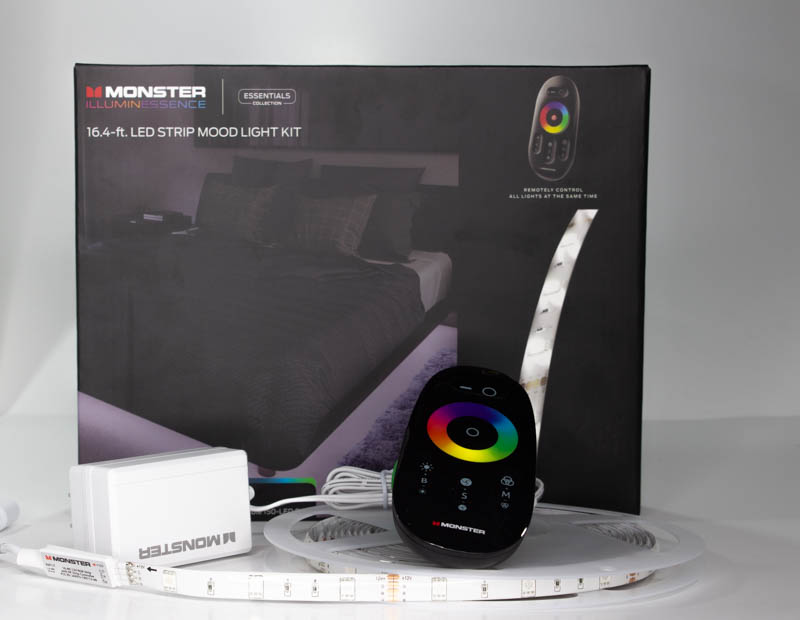 LED lighting technology, compared to traditional light bulbs, is more efficient, requires replacement less often, and provides an immeasurable aesthetic upgrade. But getting started can be expensive. And even if cost isn’t an object, some of the solutions are complex and difficult to install.

Monster’s IlluminEssence is neither. You can light up almost any normal-sized room for less than $40 and doing so is no more difficult than changing a light bulb or plugging in an AC adapter. The LED strips even come with a sticky back so you can just peel-and-stick them wherever you want.

When it comes to budget-priced technology we’re not used to looking in Monster’s direction. Not to be confused with the job hunting site, or the energy drink, Monster Cables was created in 1977 when its founder, Noel Lee, realized that higher quality audio cables lead to better sound.

That might seem like a no-brainer to you, today, but a few decades back there were two kinds of audio cables: Monster’s, and cheap ones.

I’m happy to report that, in this case, Monster’s LED lights may be inexpensive but they certainly aren’t cheap; I found both the bulbs and the strips to be of exceptional quality (with a couple caveats I’ll get to in a bit). 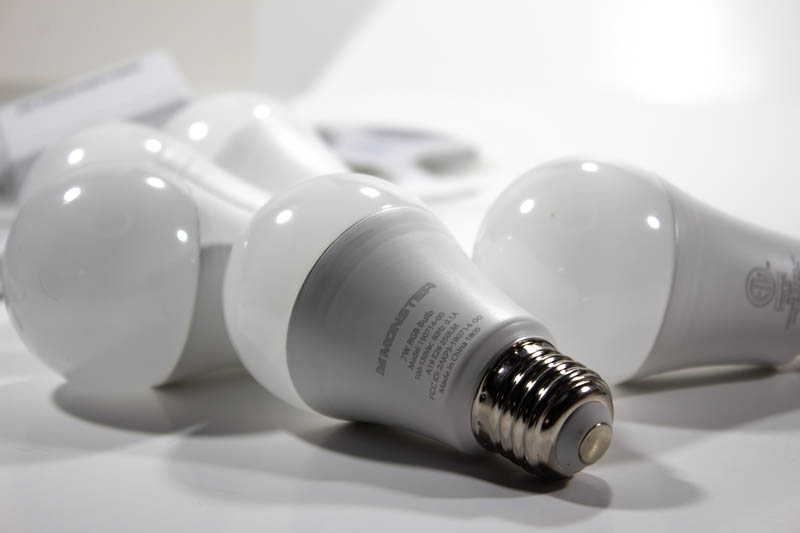 As you can see in the images there’s nothing special to call out in the looks department. It’s a bunch of LED strips and light bulbs – these are the kind of home accessories that you typically hide so that only the light they produce can be seen.

Functionally, there’s a lot to like about the IlluminEssence lineup. Let’s start with the bulbs. They work in just about any fixture you can use an ordinary light bulb in (speaking specifically for US use, we haven’t tested these in other countries).

The key differences between these and what you’re used to with standard white/yellow bulbs, is that LED light bulbs offer millions of color combinations, dimming without a switch, and a remote control for instant mood lighting. Also, since they don’t get very hot to the touch, they’re safer.

The LED strips work the same as the bulbs, with the exception of how they’re powered. Instead of inserting them into a fixture you just stick them where you want them and plug them in.

Monster also sells an extender that comes in handy if you want to put an LED light strip somewhere without a nearby power source.

Each kit comes with a remote control. In theory, this is a fantastic idea. There’s nothing more annoying than trying to operate your lights in the middle of the night using your phone or a smart speaker.

So when I opened the boxes, saw the remotes, and realized that these lights don’t require an app or connect to my home network, I was actually excited.

Unfortunately, my excitement faded as soon as I started using the remotes.

Firstly, they do work. You can change colors, set off delightful patterns, and control the brightness of your lights with the press of a button using the included remotes. Even better, you can set individual remotes to control specific arrays of lights.

So, for example, you can have a remote for each room or use two remotes to change different lights within the same room independently. In fact, you can control dozens of lights per individual remote, so the possibilities are nearly endless.

But the remotes are incredibly frustrating to use. They have buttons that don’t depress, but are instead touch-reactive. And they are too sensitive by far. Touching the remote anywhere can trigger an unwanted button press if you’re not careful.

This means I’d often pick up the remote, spend a few moments dialing in the color I wanted and dimming it to the proper brightness, only to accidentally trigger full-bright white light when I set it down.

I cannot express how obnoxious this is when you’ve just put an angry toddler down for the night.

However, I do have big clumsy hands, so maybe your experience will differ. Either way, for my money, I’d much rather have traditional buttons on the remote.

Aside from that, I also didn’t like the way the shorter light strips connect to their USB power source. There’s a flat pin-connector that slips apart far too easily for my taste. A consumer-oriented product (at least judging by the marketing and packaging) like this shouldn’t require said consumer to have the fine motor skills it takes to couple a flat pin-connector every time something bumps the light.

But, those are my only gripes with the products I tested. Other than a frustrating remote and the one design issue, I found the IlluminEssence kits to be top-notch. They’re priced about the same as run-of-the-mill smart lights, but instead of ‘smart’ connectivity, you’re getting exceptional brightness and quality.

Also, I recommend the bulbs specifically to any amateur photographers out there. During my time using Monster’s LED lights I’ve found them especially useful for creating interesting practical lighting situations.

The above picture was taken with a Samsung Galaxy S7. There’s no filter, and the only editing that was conducted was cropping it. It was lit using three Monster IlluminEssence bulbs.

If you haven’t already made the leap to LED lighting (and you should) then this might be the single best entry-point there is for anyone on a budget, or worried about making things too complicated.

You could spend a lot more on a ‘smart light’ solution – but if you’re not concerned with controlling your lighting through an app or with your smart speaker, this is the better way to go.