When we hear the words robot and alcohol in the same sentence, we get curious. We recently sat down with Monsieur, a robotic bartender that learns what you like, and its creators for a drink and a chat.

The box-shaped Monsieur doesn’t actually have any robot arms to physically mix drinks, but it does feature a pump system that can accurately measure drinks from up to 16 liquid containers. Intelligent features include a mobile app for ordering, personalized recommendations based on your drink history, and an alert that helps call a cab when your blood alcohol content gets too high. 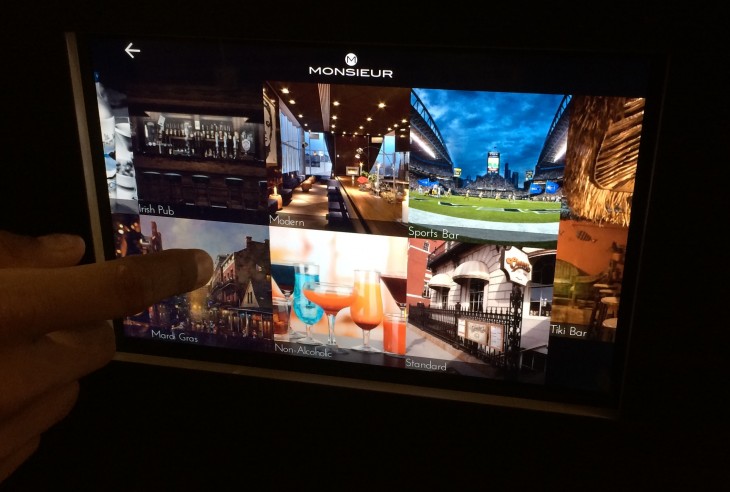 The project is currently raising money on Kickstarter with an initial batch of units expected to go out to backers later this year, followed by a larger round in April. Monsieur will be able to integrate with home automation systems like SmartThings and Zigbee over Wi-Fi and Bluetooth.

Robots don’t come cheap, and Monsieur is no exception. A four-pump unit starts at $1,499, while an eight-pump model starts at $2,699. A larger 16-pump version with custom finishes is being designed for bars and restaurants with prices as high as $5,000.

The four-pump version should accommodate a cocktail list of roughly 10-12 different libations, while eight pumps can make between 20-25 kinds of drinks. The commercial 16-pump version can serve between 50-70 different kinds of cocktails.

For the average consumer, $1,499 is a lot to drop on a drink mixing machine, but it’s also still in a reasonable range. Buying a unit to host an open bar at a wedding, for instance, would more than pay for itself. Startups that hire bartenders for regular company parties could justify the expense in just a few events.

Monsieur will launch with 12 preset themes like a tiki or a cigar bar. The screen tells you where to hook up the ingredients and then the machine takes care of the rest.

If you live in a San Francisco, New York, Los Angeles and Miami, you can send the ingredient list for a given theme directly to BevMo to have everything delivered. The machine can also monitor when you’re running low and automatically place orders.

The current Monsieur prototype that the team is showing off uses an Android tablet for its screen, but production units will feature an LCD screen and a custom board.

Co-founder and CEO Barry Givens said that he came up with the idea because he wanted a way to get a consistent drink at home. Since he has a background in mechanical engineering, he decided to build it himself.

Givens added that Monsieur isn’t competing with master bartenders and mixologists. The machine can’t do advanced techniques like ice chipping and lighting things on fire, so it’s really only focused on making your standard cocktails.

In fact, mixologists have responded positively to Monsieur because the device can crank out the simple drinks while they focus on their specialty drinks. There’s also potential for mixologists to make money from Monsieur by sharing recipes that can be purchased through a digital store.

“Other bartenders get a little shaky, they say ‘Hey, you’re taking my job,’ but we calmed them down,” Givens said. “The initial market is areas where there’s not a bartender present. We’re not taking jobs.”

His vision is for Monsieur to find its way into homes, offices, arena suites, nightclubs and restaurants that don’t already have a bartender on hand. In that regard, Givens compares Monsieur to automated coffee makers like Keurig and Nespresso. Capsule machines offer coffee drinkers a consistent cup of coffee without ruining the business for baristas.

Givens said Kickstarter backers have already come up with interesting plans on how to use it. One family, for instance, is planning to stock a second Monsieur with juices so the kids can mix their own non-alcoholic drinks. Another backer wants to use Monsieur to provide themed drinks that coincide with a book club. Meanwhile, a chain of sports bars in India is interested in snatching up a few units.

The true measure of Monsieur’s success is going to be the quality of its drinks. I tried a couple cocktails from the tiki bar theme and found them to be comparable to a decent bar. You can adjust a preference setting to change the strength of the drink by about 10 percent in either direction. If you’re not into sugary drinks, you use Monsieur to store drinks like scotch and cognac instead of mixers and liqueurs.

Given the level of precision that Monsieur affords, any complaints about drink quality will really fall on the quality of the ingredients and the recipe. It’s not much of a stretch to imagine that robot bartending is the future of drinking, but mixologists don’t have much to worry about – at least until Monsieur gets outfitted with a flamethrower and an ice chisel.