Moju, the motion-based photo app launched last year that bills itself as an Instagram on steroids, lets you take a series of shots that automatically fuse for animated viewing with a twist of the wrist.

The app lets you shoot up to 24 frames that combine to form a shareable “moment” viewable from any angle based on how you twist your phone. Pivoting or twisting your device animates the static images. You can shoot on the fly or import images from your Camera Roll.

Today, Moju Labs has released version 2 of the app, which offers significant technical and communication enhancements accompanied by an interface overhaul.

Version 2 lets users employ peer-to-peer technology to send real-time messages via a new Moju Chat. This lets you privately chat only with the people you want to as well as receive push notifications and exchange Mojus.

Moju Flashback, also new, serves up past images you shot. Like Picturelife and other photo apps, Moju will now automatically reveal old photos, reminding you, for example, of what you were doing last year at this time, or pull up a special occasion.

Not only does this serve to connect the past to the present, but it lets you string multiple occasions together to create new stories.

The company is also previewing a new feature called Face Align, which uses facial detection and recognition technologies to align and blend faces to generate new images of the people you have photographed. “All the people you’ve met and took a picture of, we’ll do a Moju of it with their faces aligned together, “said Mok Oh, CEO and co-founder of  Moju.

Finally, Moju’s camera and main buttons are easier to find alongside a new tiled view on the profile page. 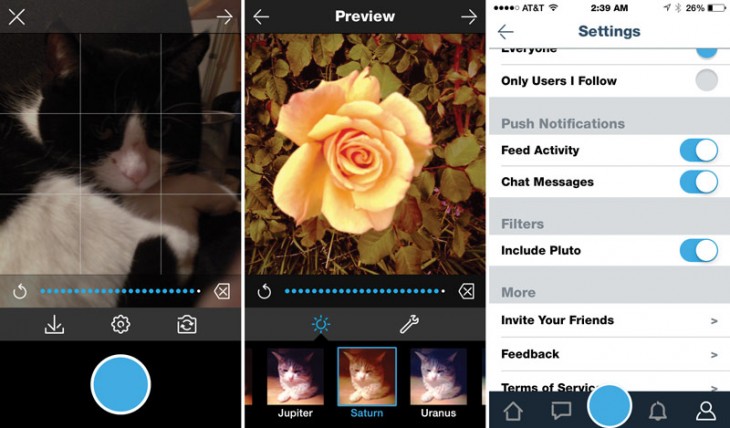 “Moju 1.0 was not feature complete, but this version is,” Mok Oh, Moju’s co-founder and CEO told TNW.

In the future, Moju plans to combine Flashback capabilities with machine learning to serve as a framework for customized image animations. “Machines figure out patterns and then serve stories back to you; it’s very personalized,” Oh said. That technology is already built into the app.