Mobli is rolling out version 4.0 if its popular video- and photo-sharing app for Android and iOS today, introducing a new live-broadcast feature that lets you share live video-streams.

We first covered Mobli way back in 2012 as it passed the two million-user milestone and introduced Facebook Timeline integration. The Leonardo DiCaprio-backed startup raised another $22 million funding round later that year, before going on to nab a rather chunky $60 million six months ago. 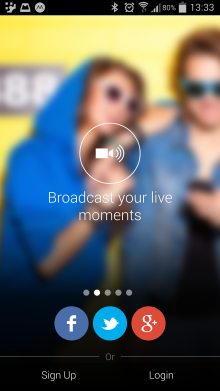 With the latest update, you simply have to touch a button and your video will be shared with your followers in real-time.

So, live-broadcasting directly from within the Mobli app – this is a major differentiator from other similar apps in this space, including Instagram.

“Mobli is introducing the beginning of a new era of live streaming,” says Moshe Hogeg, mobli founder and CEO. “This is the natural evolution of visual content sharing as we see it, enabling users not only to broadcast live, but rather to fully interact in real time, in a complete way, with people anywhere, anytime. Live content is our main focus for 2014 and we have a lot more to come.”

Unfortunately, the Android update only lets you watch live-streams for now, though the broadcasting feature will be added “soon”.

The new version also includes a refreshed UI, while a revamped mobile website powered by HTML 5 is also scheduled for launch on May 30. Elsewhere, Mobli has revealed its opening its platform to developers too.