Heyzap, the mobile gaming social network, has released an Ads SDK that it says will help the 4,200 developers in its network monetize their work. By implementing this SDK, players will be served ads that are relevantly targeted towards them while allowing game developers to earn money. The SDK is available for both iOS and Android devices.

Promising that it will take around 10 minutes to integrate into games, this Y Combinator alum says developers can now monitor the results of their ads through the use of a “sophisticated dashboard” on its website.

Heyzap says that developers will be paid at the end of the month. After the Ads publisher has accumulated $100 from their campaign, payment will be made through PayPal, although Heyzap supports ACH/Wire Transfers and checks within a 30 day window. For payments larger than USD$10,000, a wire transfer is needed.

How the ads are displayed

According to Heyzap, its social-preference engine will be used to help developers receive the most impressions possible. The company tells us that the ads will be displayed based on a variety of factors, including geography and context — something that Heyzap feels is very important. For example, ads shown will vary depending on whether you’re on 3G/4G/LTE or on WiFi in order to avoid displaying ads for games that have a large file size.

The Ad SDK only offers up one ad type — an interstitial banner. The specifications vary depending on whether it’s for an Android or an iPhone.

The launch of the SDK seems to go head-to-head against Facebook’s Mobile App Install feature. We mentioned this to Heyzap and it tells us that while there is a bit of an overlap between its Ads SDK and Facebook’s offering, one key difference is that Facebook doesn’t have a distributed approach. Heyzap is not only serving ads right within its application, but also inside other games as well.

The release of this SDK comes after Heyzap launched its Leaderboards and Achievements mobile SDK last fall. So far, the company says that Zynga, TinyCo, Storm 8, Gree, Kabam, Com2Us, and other leading game developers have signed up for the service and are using it to expand their reach through their mobile apps and games. 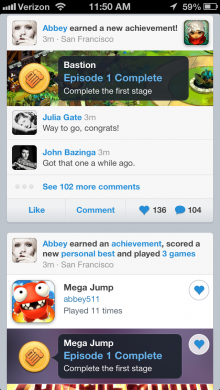 Heyzap is also releasing an update to its News Feed to help users discover new games and see achievements and view scores. It believes that this is part of its mission to be an industry leader in capturing this so-called gaming graph.

Since its early beta launch in December 2012, Immad Akhund, co-founder of Heyzap, says that the adoption rate has been “phenomenal” — 350 games have installed the SDK in just 3.5 months. Today, the company is connected to more than 4,000 games on Android and iOS through its SDK.

Heyzap recently raised $4.3 million and to date, has raised $7.97 million in funding from not only Y Combinator, but from Union Square Ventures, AngelList’s Naval Ravikant, Founder Collective, Qualcomm Ventures, and more.