LinkedIn is arguably the most underrated of all major social networks. Its focus on professional networking means it isn’t likely a place for your LOL Cats, Instagrams from your recent holiday or videos you just checked out, but business networking is hugely important, if not entirely glamorous.

The fact that LinkedIn has grown into a business catalogue with 150 millions members, with representatives from hundreds of thousands of companies searchable, enables very focused networks of contacts to be developed. Added to that, it often throws up interesting contacts-of-contacts, making it a goldmine of potential new connections for whatever line of business you’re in; especially as ‘friending’ someone you don’t know is par-for-the-course.

That said, there is always a slight disconnect from the service. Social discovery — the art of finding new content and people using other services and data like location — is becoming standard in most social networks and I’d love LinkedIn to be closer integrated to my own activity, such as events – particularly given my penchant for misplacing the business cards that I tend to accumulate in large numbers.

One potential solution is Beepmo, a location-based mobile app that piggy-backs LinkedIn to make connecting with new people as easy as checking into Foursquare. Heralding Beepmo as the answer to my lost business cards is massively underselling its proposition, however, as social discovery is very much at the heart of this service.

Beepmo launched in beta on February 1 this year and, in essence, it allows LinkedIn users to discover other users of the business social network and upcoming events in their area. That’s a distance of up to 100 kilometres away from your device, thanks to data from mobile networks.

Users that download the app are prompted to log-in using their LinkedIn account — details of which are used to populate their Beepmo profile — and, once a mobile number (which can be kept private) is entered, the service is off and away.

Built with Asia in mind

Beepmo is designed for the growing professional social networking scene in Southeast Asia, India and Australia, Simon Lower, co-founder of Greencloud Labs, the Betaworks-inspired incubator behind Beepmo, told The Next Web. 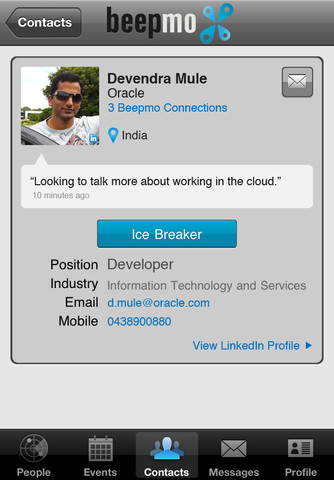 Generally speaking, Asians are less inclined to ice-break with new people, compared to those in the US and Europe, but yet they are comfortable putting their details online and connecting via cyberspace, Lower explains.

Events are a key focus for Beepmo, and Singapore-based Lower believes it can make networking more productive and interactive for the 15 million plus LinkedIn members in Asia.

“Beepmo is built with Southeast Asia in mind,” outlines Lower, who was a founder of Soundbuzz, the mobile startup acquired by Motorola in 2008 but since shuttered. “The idea came about from talking to event and conference organisers about networking and how business people in the region connect.”

Equally, the fact that the service is mobile-only is another facet that draws inspiration from Asia. While the mobile Web is a more social experience in the West, thanks to apps and the growth of mobile social networking, it is the primary (or, for some, only) access point for many keen social network users in Asia.

Furthermore, with no service established as the de facto LinkedIn-like service for mobile, Lower and his Greencloud Labs partner Mark White saw a huge possibility.

“LinkedIn tends to be a Web-centric experience,” Lower says, “which gives us an opportunity to become a professional social network that sits on mobile.”

Addressing a gap in the market

While location-based services have surged across the world, and particularly in Southeast Asia and the continent as a whole, business services have been largely overlooked in favour of consumer-targeting services, according to Lower. 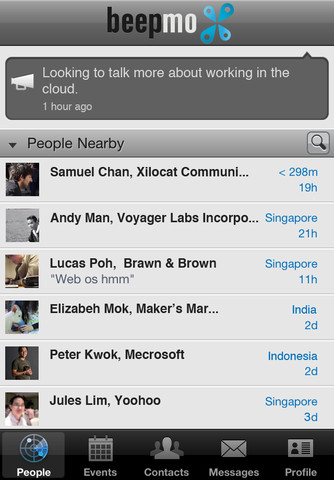 “There’s no existing tool or service that allows professional online network users to connect by location,” he says, “instead it tends to be piecemeal.”

Greencloud Labs has no intention of launching a standalone social network, but it is instead aiming to bring services together and provide additional functionality and options on top.

“We had the idea for Beepmo a few years ago but it is only feasible now with rise of LinkedIn, Facebook and others. These act as the backbone of the professional presence, with Beepmo is the utility.”

As well as finding new contacts, Beepmo is an event-centric service that allows users to discover upcoming events in their area using data from LinkedIn.

Going behind LinkedIn to break the ice

The service was originally solely devoted to serving LinkedIn but support for Twitter and Facebook has been added to provide a richer experience and more context.

While the user experience is still focused on the professional social network, and to that point a LinkedIn account is require in order to use Beepmo, it uses details from Twitter and Facebook accounts to “help show things in common” with other users.

While Twitter is commonly used for a mixture of business and personal content, Facebook may not seem like an obvious addition for a Beepmo. However, it’s addition is again related to Asia where there is “less separation between personal professional on Facebook”, Lower explains.

The calculation of common interests from the aggregation of other social networks serves as ammunition to help establish common ground between users — through the service’s ‘Ice Breaker’ feature — and other services may be considered in the future to help aid discovery. 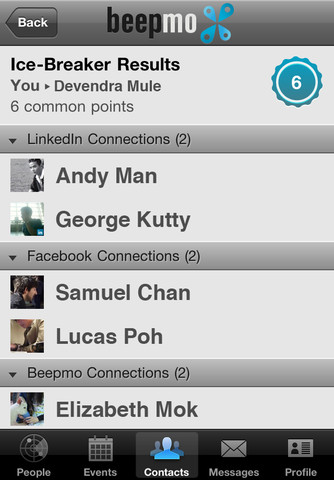 Lower believes that social discovery is a huge new frontier for the online space, with business usage is particularly important.

“Social discovery apps have huge amounts of potential as social networking is evolving from connecting with those you know, to meeting new people. We can see this coming already with the next wave of services, such as Highlight.”

While Lower draws a comparison with popular consumer services, he further emphasises that the focus of Beepmo is to serve professional social network users.

“Our app is in the social discovery space, but we have a clear context: helping those in the professional space to expand their networks and meet new people.”

With just an iPhone app available to date, aiming to build a presence in a region dominated by Android and RIM’s BlackBerry smartphones is simply not possible, and plans are afoot to expand its support.

Apps for Android and BlackBerry are due within the next month and, with those two big platforms supported, Beepmo is putting itself out to a much larger audience in its target market and can expect to see further growth.

Lower says they have been “overwhelmed” by the interest its received since launching on February 1. He further reveals that it has helped facilitate more than 3,000 new connections during its first two months.

The app is seeing “massive amounts if interest” in Indonesia, where LinkedIn recently passed 1 million members. LinkedIn is growing faster there than Facebook, which has a colossal 43 million registered members in the country, which demonstrate that professional social networking is just dipping its toes there.

Though it is targeted at Asia, Beepmo is seeing an encouraging level of usage in Western markets. That’s impressive considering that all growth outside of Asia is purely organic, with no investment or focus from Greencloud Labs, for now.

Aside from the upcoming mobile expansion plans, Beepmo is zoning in on possible revenue generation options, although it is currently focused on scaling its userbase and activity levels.

When it comes to monetisation, the events sector is one area where Lower believes it can make a big difference, helping participants to network and interact and event organisers to better disseminate and manage the flow of information.

While the app will remain free to users, the next phase of its development will see the introduction of Beepmo’s dedicated event platform to cater for organisers with a greater level of functionality.

The upcoming platform will allow show organisers to distribute the app to participants, and specifically promote the events across the Beepmo userbase, and distribute content through it. Following the close of events, organisers will be able to grab analytical data of how Beepmo contributed to their event, which could provide  interesting indicators for future planning and more.

However, further specialised options and customisation could become available ‘power users’, with Lower saying that there is the possibility of introducing premium service for users that seek “more active ways to network.”

Lower also says that they may look to cater for organisations that seek enterprise options of Beepmo.

Conclusion: A more social LinkedIn ideal for a business trip or event

Beepmo is an alternative method for making the most of the growing data and people stored on LinkedIn.

So, if you are looking to increase your contacts on LinkedIn, Beepmo is certainly worth a look, particularly if you live in a busy Asian city like Singapore or Hong Kong, where thousands of potential new contacts are clustered together.

In other less obvious business markets, where there are lower LinkedIn member numbers, it will be interesting to see how Beepmo markets itself. There is an option to invite LinkedIn users to join but, with a focus on discovery, hitting up a few hundred existing contacts with a well-meaning (but ultimately spam-like) message may sit well with everyone.

However, LinkedIn continues to grow strongly across Asia (and other markets) thanks to a focus on internationalising its service, which puts Beepmo in a position to ride the wave and grow its own userbase as professional social networking continues to rise in Asia.

The app is one a few that is bringing something unique to the LinkedIn experience and, for that reason, it will keep its spot on my phone. I’m particularly looking forward to seeing its value the next time that I’m in a foreign country, unfamiliar city or at a networking event.