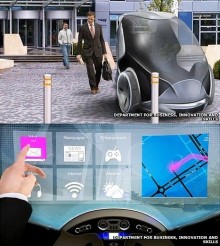 Milton Keynes is set to be one of the first places in the UK to trial driverless cars, which are more like futuristic looking pods than normal cars, in a £1.5m government scheme that will see them deployed by 2015.

The ‘cars’ are capable of up to 12MPH and will operate on pre-set automated routes around the city center, according to the BBC.

Initially, the fleet will be made up of just 20 vehicles, but if successful this could increase to around 100 by 2017. With no controls to worry about, passengers will be able to leisurely browse the internet, check emails or do whatever they like inside the pods on the way to their destination. Pricing for the journeys has not yet been decided.

➤ Driverless cars to be introduced in Milton Keynes [BBC]