Hot on the heels of Apple’s unveiling of Mac OS X 10.8 Mountain Lion, Microsoft shares have risen to a nearly two-year high. Apple’s stock price felt a dip earlier today, possibly due to the iPad’s Q4 tablet marketshare drop, but has started to bounce back mid-day, likely in response to the OS X announcement.

According to MarketWatch, Microsoft Corp. MSFT shares rose almost 5%, to $31.55 today, reaching its highest point since April 2010. “Microsoft, which reported strong quarterly results in January, has seen its shares climb 21.5% since the end of 2011.”

The exact reason for the spike is still unclear, but Microsoft has witnessed an intense growth rate over the past two months. What’s interesting is that Apple’s OS X announcement signals a push for an iOS-like experience on the desktop, which may signal less competition for Microsoft in more professional, business environments. 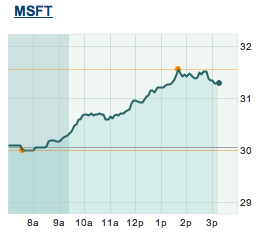 Microsoft’s investors may believe that efforts to create a unified, Metro interface is wise as well, since Apple is working in that same direction.

Overall Apple shows no sign of slowing its steep rise, despite a two-day decline, while Microsoft’s recent spike seems too fast to maintain. We’ll have to wait and see how this plays out over time.