Microsoft Ventures has been running for around seven or eight months now – although the funding aspect of the program has been active in different forms since 2012 – so we thought it time to catch up with Tzahi (Zack) Weisfeld, Senior Director of the organization, to see what kind of progress it’s making and whether there are any changes on the horizon.

Like any big name company with an accelerator, the organization receives far more applications than it can possibly handle, so not just any old founder with any old idea can get in. Weisfeld told us that for each intake there are around 400 applications vying for the 10 – 15 spots in the program.

And if you’re thinking that Microsoft Ventures takes a slice of equity simply for providing this support, or that the teams are obliged to use Microsoft technology or products in some way, you’d be wrong. But you’d be forgiven for thinking it.

Microsoft Ventures might be a recognizable brand name thanks to its relationship with Redmond, but it offers more than that – relationships with partners, customers and other extensive networks – putting the program is in a pretty solid position in terms of reach, Weisfeld told us.

Many others in this space don’t have what we have, and that’s a connection to the largest corporates around the world. If you look at all the other companies trying to do similar things in our space, we’re definitely probably better connected to the global players.

All of these big players – Microsoft partners, customers, people we’re engaged with on a long-term basis – all of these are looking for ways to interact and engage with accelerator innovation and tap into the amazing world of entrepreneurs all over the world.

It’s not trying to go it alone either, Microsoft Ventures is an amalgam of former activities – like BizSpark, Bing Fund and its earlier accelerator efforts – reshaped into a singular organization.

As such, it has partnered with others like Seedcamp in London to tap into a different, younger crowd of hopeful businesses and entrepreneurs. 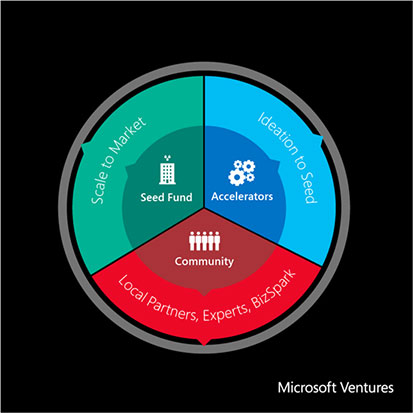 Weisfeld explained to us that Microsoft Ventures’ activities are broadly split into “three pillars”.

The first is the “discovery pillar” made up of 103 Microsoft Innovation Centers spread around the world – it’s not all the US and Europe either, they’re also present in in India, China, Latin America and a number of other places. It’s here that the organisation helps entrpreneurs take the first fledgling steps from an idea into a business.

These are places where entrepreneurs at a very early stage start working on new ideas. So, part of the basic thing we do is provide a curriculum, provide a stage to start to bring their new ideas to life. Some of it is in universities, some of it is in different rural areas… Then we have our global partners that are part of our discovery pillar.

We work with Startup Weekend, with Founders Institute, and Techstars – players that are out there working with entrepreneurs throughout the world. We support them in different ways – with office hours, with our top talent, with perks and with other things that the entrepreneurs going through these programs need to make them successful.

The second pillar underpinning Microsoft Ventures are the accelerators programs themselves – which began around two years ago in April 2012 in Tel Aviv. Now, there are six, in Bangalore, Beijing, Berlin, Paris and London, each at a slightly different age of maturity, according to Weisfeld.

“Overall, from the more mature ones, we already have about 85 percent of the startups going through our accelerator program having raised follow-on funding, on average $1.3 million. 35 percent of our startups have raised Series A, and we’ve had about eight acquisitions already.”

It’s not a hands-off experience for the startups and support from a distance, though. Weisfeld describes it as a “highly-engaged model, with an “adventure-driven program” and a curriculum that covers customer development, advanced storytelling, pitching and funding. They also work with local entrepreneurs around each ecosystem so that the startups have local mentors who provide “five or six” hours per week with their startups and none of whom are taking a slice of the action or being paid for their help.

“We don’t take equity in these companies… the purpose is really about building amazing companies and helping them be successful,” Weisfeld reiterated.

Another example could be a PR firm that works with a startup to improve their pitching and refine the storytelling, but instead of being paid for the work gets to keep in touch with a fast-changing world of technology – and a ready supply of potential future clients. Ultimately, in some way, it’s a reciprocal situation that helps both parties.

The third, and final, pillar of the organization’s activities is the “growth pillar”, which focuses on taking startups that have been through the four-month accelerator program – and some that didn’t but that Microsoft Ventures thinks could be great startups – and help them to secure funding and scale quickly.

One of the programs at this stage is CAP, the Customer Access Program which connects the best startups with the largest partners to “talk about the future of technology, and figure out if they have business together”, Weisfeld said.

This is of huge value to startups. Sometimes is easy to get. Funding is out there in the world, and one thing that’s harder to get is customers. So this is one thing that we’re doing to help startups get customers.

Naturally, Microsoft Ventures gets the opportunity to invest too. Its first seed round gamble was SkyGiraffe, an enterprise app building platform, back in October last year.

Culture beyond ‘the startup culture’

One of the biggest changes to the program since it started is what the organization sees in terms of differences in culture in each of the places it has accelerators. Going through an experience where your hard work is critiqued in a detailed manner can be too much for some to take:

Throughout the accelerator program the startups go through a process that makes them question everything they’ve assumed so far, in a very rapid form and then (in)validate their assumptions with the market. This process can sometimes be very painful as startups may realize in many cases that the market ignores them. In different places around the world this painful process is accepted in a different manner.

According to Weisfeld, it’s understanding these variations and making small tweaks to the way things are done that makes all the difference.

If you’re telling someone their idea isn’t going to fly and no one is going to use it etc, the feedback you get in the US is usually ‘thank you for the feedback, it’s really valuable’. If you do that for an entrepreneur in Tel Aviv, they’ll look at you and say ‘you have no idea, you don’t know what you’re talking about, there’s a big market for what we do’, they eventually come back and accept the feedback but there’s a lot of push-back first.

You do this in India and you sometimes get to the point where the entrepreneur will basically leave the room with tears in their eyes because you just called their baby ugly.  Again, they’ll come back, listen and go through the process.

Initially, Weisfeld said that the organization wasn’t aware of the differences and tried to copy its model from the US and bring it to the rest of the world. Now, he says the programme is continually tweaked to ensure that each location is properly adapted for local differences.

We’re very cautious now that Berlin is different than Bangalore than Beijing and make sure we adapt properly, but they all seem to create the same result at the end of the day: much better startups.

Included as part of this process is making sure that the entire team is “culturally fit” – achieved by assigning two experts for each session. “For example, Ravi, the accelerator director from India, leads customer development in Tel Aviv, with Hanan, the Israeli director, as support. Hanan leads in India with Ravi as support – this way we constantly train the team to be culturally fit. We do the same across the European accelerators,” he said. After these sessions, the feedback from the startups is reviewed and any further changes are made as necessary.

In a world that often focuses on product and funding, it’s easy to forget that having the right team is an essential part of a successful startup. A good idea and a pot of money just isn’t enough to achieve success most of the time.

Generally speaking, at the start of the application process the 400 or so submissions are reviewed on two criteria: the team and the idea. Is the team balanced? Does it have relevant experience in the field of the problem it’s trying to solve? Is the idea reasonable sounding? These Web applications (including videos) are reviewed by the Microsoft Ventures team to whittle it down to around 100 applications.

To get from 100 down to around 20, the organization holds face-to-face meetings.

“One of the things we’ve started doing lately is bringing people who are experts in human behaviour to these sessions. What we’re trying to do is understand whether the team can survive as a team? Can someone be CEO? Can they make decisions? How do they react to [certain situations]?

Using these interviews, they screen out any teams that seemed strong initially, but upon closer inspection look like they won’t survive as a team. They also use them to see how “coachable” the startups are.

“If they know everything and think that they’ve got it all right and just want some cheap or free real-estate or infrastructure, we’re not the right place for them. We can help considerably startups that are willing to learn,” Weisfeld said.

The team then chooses 10 – 15 startups from this group for the four-month program.

This relentless focus on the team, as well as the product, is extended to the wider group of startups at each intake too. With so many companies and talented people all working in the same place it makes sense to encourage co-operation where possible. They do this through traditional team building exercises, away days and weekly scrum meetings.

“Early in the program we take them out for team building, or a trip or whatever, they think it’s funny because they work so hard at the accelerator and say ‘we don’t have time for this’ etc. but they mostly come back [with a much higher level of co-operation]. It’s just amazing… you see them come back and try and help each other.”

There’s no doubt that Microsoft Ventures has some pretty strong ties to industry and education, and that changes that it has made to the program – like encouraging interaction with big organizations and universities beyond the end of the accelerator as a source of potential customers and talent, and tweaking the program to take into account cultural differences – can only help the startups involved on a road to success, but it’s by no means a guarantee of it.

With no new plans to share at this time about further expansion into new countries, we’ll have to wait and see if the programs will touch down anywhere else in 2014.