While most of us were having our Friday night drinks and enjoying the weekend, the titans of the Internet once again try to figure out what the image of the new industry landscape will look like. Microsoft teamed up with American billionaire and ruthless activist investor Carl Icahn – who has made his fortune on Wall Street – to try to seduce Yahoo one more time by offering them a similar deal as the $47.5 billion dollar one. The plan was different though, with Microsoft asking Yahoo to sell its search business to them and the remaining parts of the company to Ichan. The latter has been running an anti-Yahoo’s board campaign and probably hoped to round that one up this weekend. Jerry Yang and his bunch had 24 hours to respond. 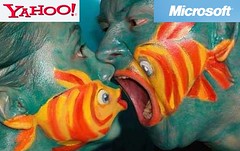 They declined the offer – saying they only wanted to sell the whole company when the buying party pays 33 dollars per share – a proposal Microsoft had rejected. Moreover, Yahoo expects that a take-over will destabilize the company and, here it comes, that the company is satisfied with the Google advertisement deal – stating it has “superior financial value and less complexity and risk than the Microsoft/Icahn proposal.” Leave us alone Microsoft, Yahoo seems to say, just let us build our company. Knowing that it’s hopeless – as Icahn and Microsoft aren’t the types to back off.

SUNNYVALE, Calif., Jul 12, 2008 (BUSINESS WIRE) — Yahoo! Inc. (Nasdaq:YHOO), a leading global Internet company, confirmed today that it has rejected a joint proposal from Microsoft Corporation and Carl Icahn for a complex restructuring of Yahoo! that would include the acquisition of Yahoo!’s search business by Microsoft.

The proposal was made on Friday evening and Yahoo! was given less than 24 hours to accept the proposal, the fundamental terms of which Microsoft and Mr. Icahn made clear they were unwilling to negotiate. After reviewing the proposal with its legal and financial advisers, Yahoo!’s Board of Directors determined that accepting the proposal is not in the best interests of its stockholders.

The Board’s rejection of the proposal was based on a number of factors, including the following:

1. Yahoo!’s existing business plus its recently signed commercial agreement with Google has superior financial value and less complexity and risk than the Microsoft/Icahn proposal.

2. The Microsoft/Icahn proposal would preclude a potential sale of all of Yahoo! for a full and fair price, including a control premium.

3. The major component of the overall value per share asserted by Microsoft/Icahn would be in Yahoo!’s remaining non-search businesses which would be overseen by Mr. Icahn’s slate of directors, which has virtually no working knowledge of Yahoo!’s businesses.

4. The Microsoft/Icahn proposal would require the immediate replacement of the current Board and removal of the top management team at Yahoo!. The Yahoo! Board believes these moves would destabilize Yahoo! for the up to the one year it would take to gain regulatory approval for this deal.

Roy Bostock, Chairman of Yahoo! said, “This odd and opportunistic alliance of Microsoft and Carl Icahn has anything but the interests of Yahoo!’s stockholders in mind. Clearly, Microsoft, having failed to advance in search, is aligning with the short-term objectives of Mr. Icahn to coerce Yahoo! into selling its core strategic search assets on terms that are highly advantageous to Microsoft, but disadvantageous to Yahoo! stockholders. Yahoo’s Board of Directors will not allow that to happen. Yahoo!’s Board remains open to any transaction that delivers full value to our stockholders – we just do not believe such a transaction should be dictated by Microsoft and a single short-term investor.”

Mr. Bostock continued, “After negotiating among themselves without the involvement of Yahoo!, Carl Icahn and Microsoft presented us with a ‘take it or leave it’ proposal under which we would be required to restructure the Company, hand over to Microsoft Yahoo!’s valuable search business and to Carl Icahn the rest of the Company, giving us less than 24 hours to respond. It is ludicrous to think that our Board could accept such a proposal. While this type of erratic and unpredictable behavior is consistent with what we have come to expect from Microsoft, we will not be bludgeoned into a transaction that is not in the best interests of our stockholders.”

Mr. Bostock also noted that Microsoft’s position that it would not deal with, or otherwise engage with, Yahoo!’s management to reach agreement on this proposal or to implement it, is completely absurd and irresponsible given the complexity of the deal – one that requires the removal of half of Yahoo!’s business from Yahoo! and then the integration of it into Microsoft.

Yahoo!’s Board points out that a transaction to acquire the whole company would be much more straightforward and involve far less risk than the new proposal or any similar alternative. The Board believes a whole company transaction could be negotiated and executed prior to August 1st. In rejecting the Microsoft/Icahn proposal, Yahoo! not only repeated its offer to sell the entire Company to Microsoft for at least $33 per share, but also offered to negotiate an improved search only transaction. Microsoft rejected both offers.

Ironically, Carl Icahn, who jointly with Microsoft developed and presented this proposal, had previously urged Yahoo! not to sell its search business to Microsoft. Specifically, in an interview on CNBC’s Fast Money program, on June 4, 2008, Mr. Icahn said, “… it’s crazy for this company now to do this alternative deal and give the store away, because obviously, an alternative deal is a poison pill because once you’ve done an alternative deal and given the search to Microsoft, you don’t need Microsoft to buy you anymore. So, that would be a poison pill….”

Significantly, the Board believes Microsoft and Mr. Icahn are overstating the value their search and restructuring proposal would deliver to Yahoo! stockholders and are substantially understating the risks. Yahoo! noted that a transaction that would separate the Company’s search and display businesses is an undertaking of great complexity. While the Board acknowledges that the current proposal contains a number of improvements over Microsoft’s earlier proposal, the Yahoo! Board’s conclusion that the current proposal is not in the best interests of stockholders is based on a number of factors, including:

– The revenue guarantees suggested, which are conditional and subject to reduction, are well below the search revenue that the Company is expected to generate on its own and in association with its announced commercial agreement with Google. That agreement alone is estimated to generate $250 to $450 million of incremental cash flow for the first twelve months following implementation, while allowing Yahoo! to remain a principal in paid search;

– The success of the remaining Company is critically dependent on Microsoft’s ability to effectively monetize search;

– The proposal calls for Yahoo! to sell its industry-leading algorithmic search business and its related strategic and valuable intellectual property portfolio for no incremental consideration; and

– Many of the components of the headline value that Mr. Icahn and Microsoft put forward, such as the spin-off of the Yahoo!’s Asian assets and the return of cash to stockholders, are steps that could be taken by Yahoo! on its own and the Board continues to evaluate these options.

Mr. Bostock concluded, “Microsoft and Mr. Icahn are trying to dismantle the Company and deliver our search business to Microsoft on terms that would be disadvantageous to Yahoo! stockholders. We are prepared to let our stockholders, not Microsoft and Carl Icahn, decide what is in their best interests and we look forward to the upcoming vote.”