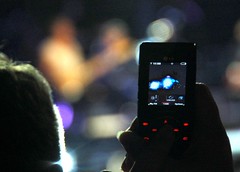 Microsoft has devised a way of stitching multiple live video streams from individual cell-phones at major events into a single widescreen broadcast.

Services such as Qik and UStream are growing increasingly popular as people share live video from concerts and sporting events around the world, although actual results can vary.

The Microsoft Labs team in Egypt has developed a way of integrating multiple live video-streams into a single broadcast, which can in turn be streamed live across the internet, for a richer, collaborative experience.

The Mobicast system synchronises the software running on smart-phones with that on the receiving server to timestamp the footage and align the video-frames. Overlaps in the footage captured by separate phones are automatically identified using image recognition technology and blended to create a wider view of the scene.

In an interview with New Scientist, Microsoft’s Ayman Kaheel admits that synchronising and merging video streams in real time can be challenging.  However, the low frame rates currently associated with video streams originating from cell-phones makes it realistic, even over 3G connections.

The team is currently developing a mechanism for using GPS signals to detect separate people filming at the same event.  Those contributing video streams to Mobicast would receive snaphots of the whole scene with their own segment highlighted within the overall picture.