Angry Birds has a knack of seemingly finding its way into the news every other day, but today it’s Cut the Rope‘s turn in the spotlight, with Microsoft CEO Steve Ballmer making a pretty interesting announcement at the prestigious CES tech event in Las Vegas.

Designed to help promote Internet Explorer 9 (IE9) and the beauty of the Web, a new desktop HTML5 version of the hugely 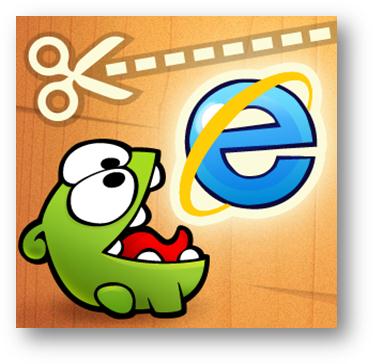 popular Cut the Rope game is now available online for free, born out of a partnership between Microsoft and the game’s creators ZeptoLab.

Although the game has been built with IE9 in mind, it is playable on any compatible HTML 5 browser, and Gabby Hegerty, Internet Explorer and Windows Live Lead UK at Microsoft, gave The Next Web a walk-through of the new game at Microsoft’s London HQ.

Just to give you a quick recap, the concept behind the game is simple: a green monster called Om Nom is hungry, and you have to help feed him candy by cutting and manipulating ropes, airbags and bubbles, collecting stars along the way for extra points. As with Angry Birds, it’s immensely addictive, which explains why it has been downloaded over 60 million times to date.

Launched in 2010, Cut the Rope has traditionally been aimed at the mobile-gaming market, appearing first on iOS, before finally arriving on Android last June. With the Microsoft/ZeptoLab partnership, that’s set to change, as HTML5 is put to the test to see if it can rival its native-app counterparts.

With the hardware acceleration enabled in IE9 and Windows 7, the game does actually look and feel as the original app does. And you can pin Cut the Rope to your Windows 7 taskbar, with IE9 taking on the look and feel of the game and unlocking new levels not found in any previous versions of game. Such as this:

ZeptoLab, with support from HTML5 experts Pixel Lab, delivered 25 levels, 18 of which are available to everyone with a compatible HTML5 browser, and seven more available to those with IE9. We’re told that more levels will be coming soon. The game also integrates with Facebook and Twitter, so you can share your scores with your friends and followers.

“We wanted to expand ‘Cut the Rope’ beyond mobile and bring it to millions of computers around the world,” says Semyon Voinov, Creative Director at ZeptoLab. “We are excited to work with Microsoft to build a Web version in HTML5 that excels on IE9.”

The Cut the Rope game isn’t Microsoft’s first foray into such HTML5 initiatives, with the likes of Disney’s Tron, The World’s Biggest Pacman and Pirates Love Daisies coming before. So is this is a sign of things to come? “You can expect more of these kinds of projects from us,” says Hegerty. “They’ll be around things where HTML5 really adds value, things that are visually rich, immersive and beautiful-looking. Gaming is an obvious one, but trailers, movies, music, comics…things that you can really bring to life…that’s the direction where we’re going.”

With Windows Phone 7 being touted as a potential challenger to the Android and iOS throne, can we expect to see an HTML5 version made available for mobile any time soon? “This one doesn’t have touchscreen capability yet, it’s all mouse-based at the moment,” says Hegerty. “There isn’t a timeframe for the mobile HTML5 version, but it won’t be far off.

“What we’re trying to show is that you can create website that can be just as good, if not better, than what you can build in a native app,” adds Hegerty. “Games such as this prove that you can.”