Meteor has raised $11.2 million to launch its open source app development platform, its parent company Meteor Development Group announced today. As you may remember, the Meteor Project is a San Francisco-based Y Combinator alum, and is currently available for early preview.

Sometimes described as the next big thing in Web application development, Meteor hopes to change the common architecture of web apps. While most of them currently run entirely on cloud servers, “applications written with Meteor run on a user’s own computer — inside their browser or on their mobile device — and fetch any needed data from cloud services,” the company explains.

If you are wondering why it matters, the answer is simple: it makes the user experience much smoother, and it is already the model used by companies such as Twitter, Facebook and Google. Yet, it has been out of reach for the average developer, and the Meteor Project hopes to change that, with the support of prestigious backers. 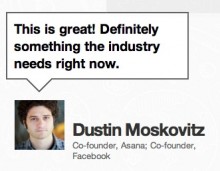 As a matter of fact, its Series A round was led by Andreessen Horowitz, with participation of VC firm Matrix Partners.

A few weeks after GitHub’s first round, this is yet another seal of approval for open source projects that are changing software development. As you may know, Meteor opted for an open source approach and JavaScript support to make its platform accessible to everyone, from newbies to experts. Meteor co-author Matt DeBergalis details:

“We want to create the universal standard for writing this kind of application, and that will only happen through broad industry cooperation. It’s clear to everyone that we need something new. Will it be Meteor? What we see today is that it is open source developers that drive the technology that is ultimately adopted everywhere else in the industry. So it depends on whether the open-source community chooses to rally around Meteor.”

According to Meteor’s original co-authors Geoff Schmidt, Matt DeBergalis, and Nick Martin, the company will “use the money to support Meteor development and grow the Meteor community, and plans to sell a complementary set of enterprise-grade operations management tools to large organizations that are using Meteor.”

Following the deal, Meteor will also add SpringSource’s founder Rod Johnson to his board, while Andreessen Horowitz’s partner Peter Levine and David Skok, general partner at Matrix Partners will join as special advisors. Meteor’s co-author Geoff Schmidt commemorated the news: “Rod, David, and Peter are our dream team. They know more than anyone else about building open-source technology for the enterprise.”

As a developer, are you enthusiastic about the Meteor Project? Let us know in the comments.