Being social online is not hard anymore given the ubiquity of social networks. You might think the Web is saturated, but one London-based startup is launching a new service on Monday that opens up another portal for chatter and discussion.

MetaWeb is the brainchild of Hrair Mekhsian and through the downloadable service, users can chat on any Web page they choose.

The software is downloaded onto your computer or iPhone and works with any browser. It’s currently in beta at the moment (you can still request access) and launches fully on the November 12.

Once the program is installed, you can see how many other users are on a particular page and start conversations with them if you fancy chatting about the content. There is also a tool for trends, which shows where people are on other pages. This helps to avoid talking to yourself.

Mekhsian says he came up with the idea because he spends a lot of his time in comment threads and forums and wanted to make that into a live experience. “I find it quite engaging and it sparks a spontaneous interaction,” he says. “I got the feeling that this would be something I would find quite useful. To be able to talk to people who are there, looking at the same thing.”

The general idea is that we’re trying to move a portion of interaction on the Web which is usually confined to pockets of activity on different message boards. At the moment on a forum, users might add a link and then start a discussion. This means copy and paste and not being able to see what you are talking about. Mekhsian asks, “What about the other people who are right there, looking at a Web page right now?” And so MetaWeb started to take shape.

At the moment it is in a simple state. The basic features are in place for conversation and trends. As the service tracks where people are, you might think that having a profile on site might show off your reading habits, so why not link it to existing social networks?

Mekhsian is not convinced that this would be for the best. “There’s two ways we could have gone with this,” he says. “To interlink as much as possible with existing networks and use existing screen names or real names is one. This would make it more viral. But instead we are segregating the identity you have on this network.

“The reasoning is that providing a service that knows where you are online, you’re asking people to go one level deeper on openness,” he continues.”People are already wary about how much data they give away. By disconnecting ourselves from real names and identities we make it a bit more comfortable to use the service.”

Getting the balance right between usability and anonymity is no mean feat. Mekhsian says he hopes he has the right compromise without relying on real identities for now.

There are still ways to make connections though. Mekhsian is planning to introduce ways for users to see others who have been to the same sites or read the same material. This is to further opportunities for social interaction. This will not be in the first release though, “We’re starting with the minimum amount required for interaction and then guided by user feedback we can add other features,” he says.

Mekhsian considered various options for making a social program work for the Web. There are alternatives like Rockmelt which bring a great deal to the social table, but this entails competing with some pretty big players when it comes to convincing an audience to download a new browser.

Another alternative that Mekhsian decided against was the creation of a server-side app where sites would be proxied and changed when returned to users. “This slows things down and poses a privacy challenge as everything goes through servers,” he explains.

MetaWeb could also have been a plugin. But to create this, Mekhsian would have had to build and maintain the service for many different browsers. Mekhsian says that there is a stigma to plug-ins, “They track what you’re doing and take up screen space, even when you don’t need them.”

MetaWeb is a hybrid. There are still plugins but it is a standalone application for a computer. Because it is stand alone, it’s pretty quick, it’s not server-side activity so it doesn’t slow things that way and MetaWeb can be tucked away when you’re not using it, so it doesn’t take up space. 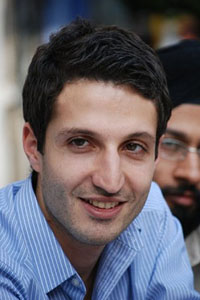 Mekhsian built MetaWeb himself, so scaling is going to be quite the challenge, but he says that he has a plan to tackle this.

“I was never really a part of the startup scene but I started going to a bunch of events and I have built up a good network of people who are on standby,” he says. “I can probably keep the service going for a month and then should look to scale. I have people I can draw on but I haven’t brought them in yet.”

So why is Mekhsian so well versed in digital human interaction? Well, the last service he worked on was sold to American Mobile Ventures and it was for mobile dating. Not the flashy, push notification style apps we have now, but an sms service.

Named Antiphony, the service was initially used by American Mobile Ventures which wanted to expand its existing offering – then mostly ringtones – and eventually bought Antiphony in 2005. So when it comes to encouraging conversation, it seems that Mekhsian has a head start.

There’s still a lot of work ahead and no doubt Mekhsian is going to have to look sharp if things take off and he needs to get a team together. But for now he’s living the startup dream with recognisable humble beginnings, “I work in the spare bedroom,” he says. “It’s the London version of a Silicon Valley garage.”