This article was published on October 3, 2014

Augmented Reality (AR) has become increasingly mainstream, so more than ever it’s critical that designers can easily create and deploy AR designs without a whole lot of fuss.

The plug-in lets designers construct tracking markers and then evaluate those markers for tracking stability. A star rating system, where the tracking quality of the image is measured, evaluates whether and how well a page design meets the requirements for AR.

Once the page is optimized, users can insert images, embedded videos and live hyperlinks into an augmented layer which becomes visible to the audience when viewed via a smartphone or tablet.

Users scan pages with a smartphone or tablet to access virtually embedded video playing on the page, interactive buttons linking to traditional print and hyperlinked content, and hidden images sparked by scanning pages. 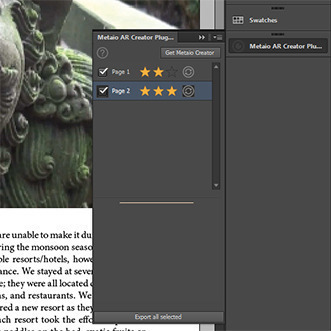 The plug-in can also directly launch the project into Metaio Creator, the company’s authoring tool. There, you can continue adding even more advanced AR content, including 3D models, animations and 360-degree virtual photos.

The plug-in lets users deploy their work via the free Junaio AR browser (for iOS and Android) or as a standalone application. You can also create your own Metaio Cloud-based or offline app.

Metaio will demo the new plug-in next week at Adobe Max – Adobe’s annual conference in Los Angeles from October 4-8.  It will demo the product again at InsideAR Munich – the Augmented Reality Conference – on October 29-30.

The Metaio AR Creator Plug-in is available now on the Adobe Exchange Store.