Would you like to participate in a startup retreat on a scenic island? This is the opportunity Menorca Millennials is providing with its new program, a 20-day quarantine experiment for second-time entrepreneurs with disruptive projects. As its name suggests, it will take place in the Balearic island of Menorca, off the coast of Barcelona.

According to Ricard Garriga, co-founder of the initiative, the inspiration for Menorca Millennials was its founders’ personal experience with the island. “We’d been using Menorca as a place to reduce our own mental noise, and we found out that it boosted our creativity. This didn’t happen in an isolated way; it resulted from meeting some high level people who vacation there, and having the opportunity to have long conversations with them.”

With Menorca Millennials, Garriga and his co-founders are now hoping to formalize this approach and give others a chance to experience it. However, the team is also determined to thoroughly filter applications and makes it clear that wannabe participants should be entrepreneurs who “have raised a significant investment in a previous company,” among other requirements:

While this may seem harsh, these criteria are deemed necessary for entrepreneurs to fully take advantage of the program. In fact, 20 days wouldn’t be enough to teach the basics of running and scaling a startup.

More importantly, Menorca Millennials is not a training program with teachers and students. It refers to its guest lecturers as ‘inspirational speakers’ rather than as ‘mentors.’

Regardless of their title, these guests form a line-up from which entrepreneurs will be able to learn — not only because of their varied backgrounds, but also because they will be able to dedicate much more time to their mentees than they would in a more traditional setting. Or, as Menorca Millennials’ co-founder Marcos Martin puts it: “It’s mentoring in flip-flops, but with highly-skilled people.”

An investment on both sides

Menorca Millennials’ 17 founding partners made personal investments to secure equity in the program, which isn’t subsided by public funding. This may deter some potential applicants: participants will have to pay a hefty 4,000 euros each to join (around $4,550 USD).

Both Garriga and Martin insist that this only represents “a fraction of the total costs of the program,” which is led by a team of 12, including five full-timers. This sum doesn’t include flights to and from the island, but will cover room and full board during the stay.

“We want participants to focus all of their neurons on thinking, rather than wondering what to cook for dinner,” Garriga says.

One of the reasons Menorca Millennials decided that participants should bear part of the costs was to make sure they would value the program and understand the work that went into it. While this approach is likely to deter some candidates, Garriga notes that scholarships are available for deserving entrepreneurs who might not be able to pay.

From Menorca to series A?

Startup retreats aren’t an entirely new concept, but Menorca Millennials hopes to stand out by the outcome it can bring for participating projects. To do so, it plans to act as a fundraising facilitator, both during the program itself and in the following months, in exchange for a 3 percent equity stake in projects that do secure investment. 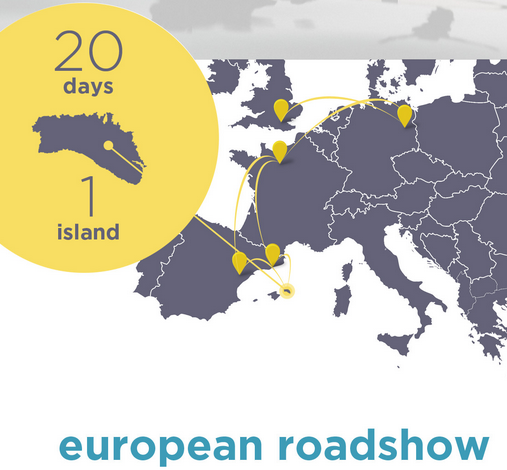 “We think that the 20 days of the program can serve as a ‘due diligence’ period on a personal level between entrepreneurs and [visiting] investors,” Garriga explains.

The program will also double as a contest – with the top 10 startups set to take part in a subsequent roadshow across Europe’s main tech hubs.

Garriga works remotely for the latter, whose platform will help Menorca Millennials handle applications. The team hopes to receive around 400 projects as part of its initial call. A jury of investors and professionals and the founding partners themselves will then shortlist 100 semi-finalists. Although only 20 of these will make their way to the island, the remaining 80 teams will still have online access to the program’s shareable content.

If you are interested in being one of them, you have until April 20 to apply through YouNoodle.