Amad Almsaodi grew up in Yemen, moved to the US where he completed his Bachelors degree in Information Systems and an MBA in technology and innovation management, got a job at Boeing and, three years later, gave it all up to create his own business.

Amad is now founder and CEO of Aqar Map, a Middle Eastern real estate site which we covered when it first launched, as well as when it underwent significant changes.

We caught up with Amad in Alexandria, where Aqar Map is now based, to delve into the story behind the site, his move to Egypt and more.

The inspiration behind Aqar Map

Aqar Map launched in a similar fashion to many Middle Eastern startups – Amad was trying to buy real estate in Yemen and found that there was no decent online option available across the region, and he decided he was going to find a solution:

“I own a similar website in Yemen called GoYemen.com. I started it in 2004, and it’s growing, and the real estate section in it is very popular. While I was in the US, I wanted to buy a property in Yemen. So I said, I own this website, it’s going to be a piece of cake – I have the whole market in my hands.

I couldn’t buy anything because of the location problem. I could not locate properties. People would say, it’s very close to the centre of the city. I’d send a friend to go see it, and they’d tell me it’s in the worst part of the city.

I ended up scratching the idea and buying real estate in the US. While I was buying in the US, I got to see their way – Zillow and Trulia – and I thought my solution sucks in Yemen. I have to build something better.”

Amad started to look at what others were doing in the region, in the UAE, Saudi Arabia and Egypt, and found a huge gap in the market:

“Nobody’s doing a good job. We have about 200 competitors in the market in the Middle East – but they’re not serious. They might be trying to do it right, but they aren’t dedicated. Or they’re dedicated, and they’re not doing it right. We’ve created a real estate search engine that provides valuable and unique information to the consumer.”

And they are continuing to roll out new features, the newest of which is around the corner:

“In under two weeks, we’ll be adding a neighbourhood tool which goes way beyond the city level, which we’re operating at now. We’ll be providing information about these areas. If you’re new to the city, you’ll want to know where to go, where are the most expensive spots, the cheapest spots, where are the family friendly or tourist friendly spots – so we’re building this tool. That’s the unique type of information that consumers really care about – not just the properties, but also whats around them.”

Moving from Yemen to Egypt

Realizing that a move out of Yemen was necessary if, as a real estate company, they wanted to target the bigger markets in the Middle East, Amad and his team considered Saudi Arabia or Egypt as the base of their operations, seeing the two Middle Eastern nations as the pillars of the regional economy. Amad explains:

“Saudi was very interesting but technology adoption was a problem especially in the real estate sector. It’s controlled more by older generations, so we decided to move to Egypt, but still work on Saudi at the same time, in parallel.”

Coming to Egypt in May of this year, yet another choice was to be made between the two major cities, Cairo and Alexandria:

“Cairo is definitely interesting. That’s where the market is. But Alexandria had a different appeal to it. I liked the fact that it’s a laid back city, the weather is nice. One of the strategic reasons I came here is that there’s a lot of qualified people here. They’re part of a strong community and they don’t want to leave Alexandria, and are willing to accept jobs here at lower salaries. That was one reason.

The turnover rate here is very low because competition is very low. So when you hire people and train them and form a team, competitors aren’t around to pull them from you. Cairo is an aggressive market. That was the theory, and in two months, I validated it.”

That wasn’t the only attraction that Alexandria held for Amad:

“Most of my team is from Yemen and I wanted to make sure they’re in a city they really want to live in. My theory on Silicon Valley is that part of the success behind it, is that it’s a really nice place to live. Boston, New York all these cities try to compete but people still flock to Silicon Valley. It’s diverse, Alexandria is diverse. It’s laid back, Alexandria is laid back. But it’s expensive there, and Alexandria is really affordable.”

Now that the team has settled into the Alexandrian way of life, they have been hard at work developing Aqar Map, making changes, improving and enhancing the service. The majority of their work has been focused on the localization of the service, starting on a country-by-country basis and now they’re taking things even further, localizing by city.

In Egypt, the real estate market is essentially at the mercy of individual realtors, who control the market. They have a less than savory reputation, and Amad wanted to find out why, as well as attempt to modernize its operations:

“We’ve met with them, interviewed them and done case studies with them. We really want to understand what the problem is – why are they being criticized all the time? When you dig into it – it’s not that their business isn’t organized – it’s that there’s no structure in the market. The buyers and sellers are always trying to skip the realtor, so the realtor has to be aggressive by protecting their hard work. Based on our analysis, we realized that we should work with them, and have already identified the ones that are ready to adopt technology and we’re giving them tutorials. Our biggest clients are small realtors and they’ve enriched our website with really good content.” 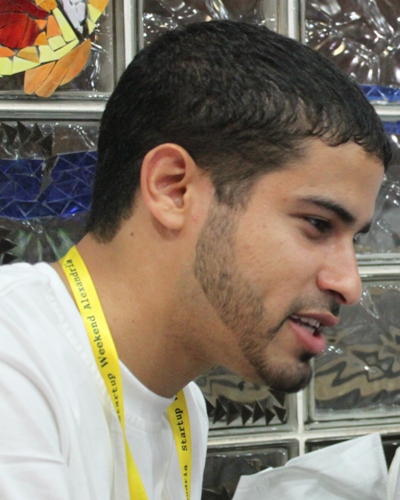 Dealing with realtors has not been the only way in which Amad and his team have had to localize the online service. Localization on the individual market level has been an essential part of ensuring that the site is a cut above the rest:

“At the beginning, we were treating the whole market as one, and it took us just a few days to figure out, that’s not going to work. So we started out by localizing by country, and now we’re going deeper to localize by city.”

And Amad realizes the importance of offering a service which will appeal to audiences on a local level:

“The more you localize, the deeper you go, the higher your barrier of entry goes.”

The Map in Aqar Map

The concept of Aqar Map, as the name suggests, was centred around an online map, but this proved to be a point of contention.

“I’m a visual person, and I discovered that about 50% of people aren’t. I’ve met so many sharp people in the entrepreneurial ecosystem that understand startups, and they tell me, ‘I don’t know if that map is good, don’t you want to remove it?’ And I think, ‘but that’s the core of my business’.”

Amad decided to put the map to the test, and invited users to come to the Aqar Map office to test the website, without telling them what to expect:

“70 people signed up and tested the site. We videotaped them, did a full study, and surprisingly many people struggled with the map. We realised we have a problem – we can’t just take the concept of the map from the US and copy it.”

The map was another feature that was in need of localization. In the Middle East, the use of maps or GPS units are not common. People are accustomed to basic directions and landmarks, and the map has been adapted to suit the local market, with clear labeling of neighbourhoods and suburbs making it easier to read.

Amad is an entrepreneur with his finger on the Middle East’s pulse, and has been watching the industry grow for several years now. He sees an innate business sense in the people of the region:

“I’ve always been passionate about entrepreneurship. Arabs are traders by DNA. For me, I was doing business since I was a kid. Typical Arab. Most Arab kids find a way to sell something. But there’s somethings we don’t do.

The entrepreneurial scene has come a long way in the past few years in the Middle East, and Amad sees it:

It’s becoming a lifestyle. People make fun of it –  everyone who doesn’t have a job calls himself an entrepreneur. Look on twitter – everyone’s an entrepreneur. But that’s nice. We just need a couple more success stories – and it will fly like a rocket.

Arabs are giving up on hiding their ideas. This was a problem before –   “I have an idea but I won’t tell you.” Now you have 60 entrepreneurs going up and pitching their ideas to a room full of people – that’s nice.

According to Amad, it’s all down to the entrepreneurial community that it’s continuing to grow across the region, with conferences, competitions, angel investors and more:

“It’s gaining momentum. I’ve been blogging about entrepreneurship in Arabic since 2008, and when I started, people weren’t aware of the topic. Suddenly things started rolling with several Middle Eastern blogs. And then you have events like ArabNet and Startup Weekend. There’s the success stories too – Maktoob selling to Yahoo, Gonabit selling to Living Social.

A positive attitude in a struggling economy

The Egyptian economy has been hit hard, and the real estate industry has been no exception, but Amad sees this in an entirely positive light:

“There’s a lot of negativity about starting in the real estate industry right now. But it’s the best time to target markets, not when it’s at the peak. That’s when competition is aggressive. That’s something else we’ve validated. We went to the top brokers and real estate agents and they listened to us – because they’re not doing anything, they’re not busy selling. I pitched them my ideas, and they’re willing to experiment, because they’re not selling. If things were moving for them, it would be hard to get time with them because they’d be busy with their customers.

Once the wave starts, and the economy starts rising, we’ll be there ready with our connections, our technology and our team. we won’t be scrambling trying to catch the wave – we’ll be ready.”