If you’ve read our list of 9 Latin American startup accelerators, you’ve already heard of Aceleradora. What you may not know is that Aceleradora was born well before acceleration became in fashion in Brazil.

As a result, its founder Yuri Gitahy  has become a go-to person when it comes to investing in his country, something more and more foreign VC firms are considering seriously. As Aceleradora is about to close its next call for projects, we decided to ask him a few questions not only about the program, but also about the state of the Brazilian startup ecosystem – insight to follow.

AH: Can you explain how Aceleradora was born? 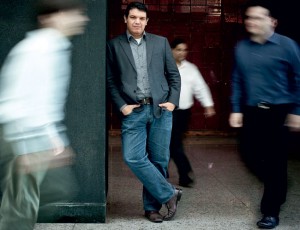 Yuri Gitahy: Back in late 2007, I took a sabbatical after exiting my previous company and thought it would be a nice time to start angel investing – only startups weren’t en vogue at the time. As an entrepreneur, my hunch was that I should start swimming ahead of the investment wave that could come, but how would I get the deal flow? And should I pass on an investment just because the entrepreneur lived on a different city, like angels used to do? Should I diversify and invest small rounds, or concentrate and bet on a few?

What really bothered me was that I could manage my previous company to deliver projects on schedule with remote teams in Europe and America, so it shouldn’t be so hard to invest on someone just because he or she lived 500 miles away – though most angels told me the opposite. I decided to prove a point, and started a company to pursue a different model for angel investing.

AH: What was your inspiration?

YG: Despite our name (Aceleradora is Portuguese for ‘accelerator’), I didn’t intend to copy the original American acceleration model. There was zero market liquidity for angels and even for seed funds, so we needed to pick companies that could be profitable (or dead) very quickly.

Plus, if we created one single headquarter in São Paulo, not all people could afford to live in a different city for 3 months. Since founders in Brazil are used to work remotely because they’re often geographically apart, I decided to keep a very lean and distributed operation and aim for national reach from scratch.

I traveled the country back and forth for several months, trying to understand the ecosystem as a whole. I took the entrepreneurship temperature of every major city, and some small but promising ones. I blogged a lot, engaging both VCs and entrepreneurs on the conversation [see some of Yuri’s advice in our post about valuation]. I gave dozens of talks to 300-people audiences of Computer Science students and business majors. I built a mentor network that helped 600 people in several entrepreneurship events. I organized meetups that gradually grew from 30 to 200 people even on smaller cities, picked very particular startups to invest, and the whole thing became clearer.

AH: Where has this taken Aceleradora so far?

YG: Today, Aceleradora supports and invests up to US$ 50,000 on promising early stage startups, helping them grow by themselves or get follow-ons. We get 50 pitches (and improved re-pitches) every week arriving on our site; as a whole, Aceleradora gave 2,000+ concrete feedbacks to entrepreneurs over the last three years.

I believe we have also become a great source of information and insight of what’s going on with Brazilian startups and the local venture capital industry. Our 30+ mentor network works part-time to support our entrepreneurs on-site or remotely all over Brazil. We can fix office space anywhere in the country. We have direct access to every good Brazilian VC, and most of the foreign VCs who are visiting, probing, and investing in Brazil since 2009. So far, the whole thing was worth building, and we’re only starting.

AH: What is Aceleradora’s track record? Any success stories?

YG: We knew it would take at least 5 years to make real money with investments on early-stage startups – if ever. We still don’t have great exits or multi-million dollar businesses to brag about, but our reputation, portfolio, and follow-ons by other VCs clearly show we’re doing a great job.

Take Crowdtest, a test crowdsourcing service where anyone can get paid to find bugs on mobile, desktop, and web applications [see our post about crowdsourcing in Brazil]. The two founders from #SanPedroValley, Hugo Barros and Robert Pereira, had an IT services company and decided to accumulate profits so they could self-invest on a more scalable business model. I personally mentored them for some time, and then they were approved on Aceleradora’s last batch right after they created a crappy MVP. Running for 6 months with that same crappy MVP, they assembled a 1,500+ testers community and managed the business towards profitability and aim for US$ 1 million in revenues for 2012. Over the last week, Crowdtest used its own community to test the new version of their own product. They’re a great example of how mentoring + execution should work to quickly build a company.

Another evidence comes from the national startup competitions. In 2010, most of the Desafio Intel finalists were backed by Aceleradora [Desafio Intel is the name of Intel’s Entrepreneurship Challenge in Latin America]. In 2011, our portfolio company EuDecido got the second place on the same competition [see our post mentioning EuDecido]. The most recent is Wayra, Telefonica’s global acceleration program. Out of 10 selected startups in Brazil [see our story], 3 are already supported by Aceleradora. At first, they were 3 among 520 applications, but ended up filling 30% of the available slots. Not too bad.

There are other great projects iterating. Ningo is building a long-tail e-commerce shopping platform, pligus is soon launching a revamped engine for collaboration at work, EuDecido is reversing the discount business model. One promising startup we’re evaluating uses crowdsourcing for hyperlocal news, the other tries an innovative approach to the hosting business to service millions of SMEs. There’s a lot of work ahead of us.

AH: What about your latest call for applications?

YG: The deadline for the current batch is December 15th. So far we have received over 150 projects to analyze, and we’ll pick 5 winners by late January. We’re comfortable in changing the modus operandi if we need to, since our goal is to have startups that grow big and become profitable as fast as they can.

In some cases, that means investing, advising, and keeping a distance, while in others we must sometimes perform a co-founder role. We’ll do both as long as they’re accelerating towards a scalable business model, so we can decide on exiting or staying in the company – whatever is best.

The Brazilian market is heating up

AH: What do you think of all the accelerators which recently emerged in Brazil? What do you know that they don’t?

YG: On the so called “accelerator boom”, I believe there are no opportunistic players – only people looking for a way to invest and improve startups at the same time, but without becoming too hands-on. What I do is ask about their investment thesis, their portfolio, and how they’re planning to exit. Most of them operate for less then a year, so it’ll take some time to figure it out. We’re still figuring it out ourselves!

I can’t say I know something people don’t… I think about the 10,000 hours theory: I founded my first startup at 19, after six months working for IBM. Over the past 20 years, I combined or alternated entrepreneurship and positions on big companies. I’m a restless tech guy who learned and applied traditional management, bootstrapping, internet business models, and venture capital. If I can’t make something solid out of this, I should definitely retire.

AH: What do you think of recent trends in the Brazilian startup market?

YG: I’m focused on consistent results. There are people who think deal flow will come by presenting themselves as whatever is trendy, but entrepreneurs are smart and eventually will tell friend from foe. Trends fade away, but track-record is an asset.

In regard to the recent trends, Brazilian entrepreneurs are quickly shifting their mindset. While thousands of small Groupon clones went broke over the past few months in Brazil, Aceleradora recently started helping Sebrae (a support institution for SMEs, backed by the government) understand how to educate entrepreneurs on business model scalability and validation. When the average founder starts thinking and validating scalable models before developing software, “scalable” will be the new black.

On what the Brazilian market needs

AH: Do you think there’s a gap in startup financing? At which stage?

YG: There’s plenty of money in the Brazilian VC market, and that includes big VCs coming from abroad to compete, co-invest, and follow-on.

It’s about the orthodox way Brazilian VCs bet their money, and the gap between what they expect from startups and what entrepreneurs offer.The angel investment gap still exists, and will continue for some time because there’s not enough angels to cover the wide spectrum of early stage opportunities and models to be proven.

In fact, we’re finally seeing a virtuous cycle: startups became trendy, investors will take risks, good entrepreneurs will yield successful stories, those stories will serve as good references for wantrepreneurs, big VCs will make some money and keep startups trendy… Everything should evolve consistently over time. But hey, it takes time.

AH: How do you think the Brazilian ecosystem can be improved?

AH: So you don’t think Brazil should copy Start-Up Chile?

YG: Start-Up Chile is a good initiative because it was the fastest way I’ve seen to have a country pinned down on the world map of entrepreneurship.

Some people assume Brazil should copy it, but Brazil already has this window of opportunity open wide to the eyes of the world. It’s about creating global businesses, not subsidizing them. I don’t think the government should back startups; the game of thrones doesn’t go well with the VC game.

It’s worth noting not everyone sides with Yuri on this; in a recent quick survey on the Brazilian blog Startupi, 75% of the 245 participants agreed with the idea that the Brazilian government needs to launch a Start-Up Brazil initiative. Do you agree with Yuri Gitahy? Let us know in the comments.