I know that this doesn’t strictly have anything to do with tech — except for the social media presence — but trust me, you’ll want to know more about this.

While scrolling through Twitter, on the prowl for stories on EU tech regulations (I’m the fun guy at the office), I came across the profile of none other than Europe’s only real-life superhero: Captain Europe.

Donning a renaissance style garb — gold-and-blue hat and mask along with a cape made of the European flag — Captain Europe goes around the continent spreading his message of unity and the European partnership.

On his Facebook page, he styles himself as Europe’s only real-life superhero who’s “committed to Truth, Justice and Progress in Europe.” And under his personal interests, the Captain reveals his ultimate goal:

“Many people seem to think the EU is dull and boring. I am doing my best to make it shiny and interesting.”

Unlike his American counterpart, Captain Europe doesn’t resort to violence to get his ideology across. Instead he spreads his message by showing up at conferences, doing virtual tours of UN buildings, attending galas, and sharing important stories on social media.

Missed the #EU at #UNOpenDay on Saturday? Don’t worry, you can find our pictures w @captain_europe here: https://t.co/9kds47Omk0

Captain Europe isn’t just some crazy guy running around in a cape. He currently has around 2,000 followers on Twitter and over 2,600 on Facebook. It’s not that big, but he’s definitely starting to make an impact online as well as at EU related events.

After a bit of investigative work, I finally managed to track down the real-life superhero and ask him a few questions, but first, you have to know that there’s so much more to this story.

The idea of Captain Europe is bigger than any one man. Much like when… *frantic googling* Bruce Wayne was succeeded by Dick Grayson as Batman, the current renaissance-style Captain Europe is the protogé of the original Captain Europe, sworn to uphold the virtues of the ‘office’ and carry on his vision — and to improve upon the costume… 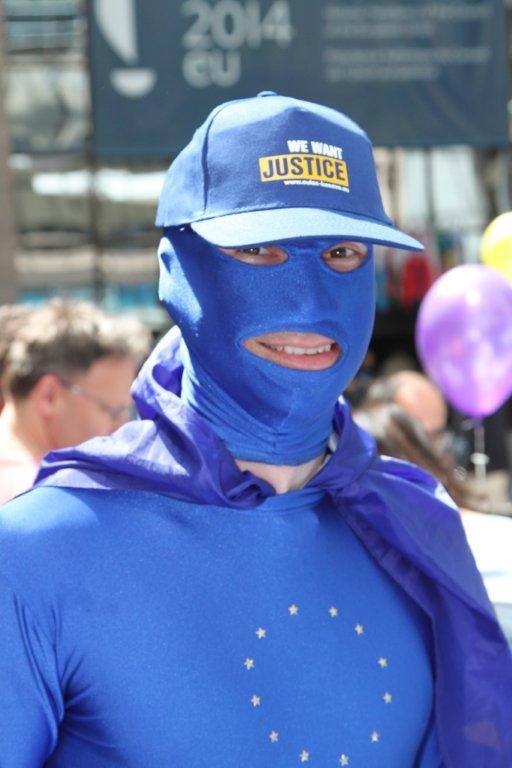 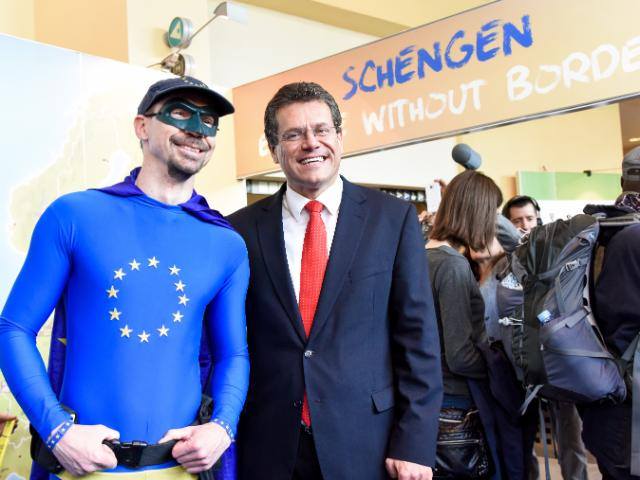 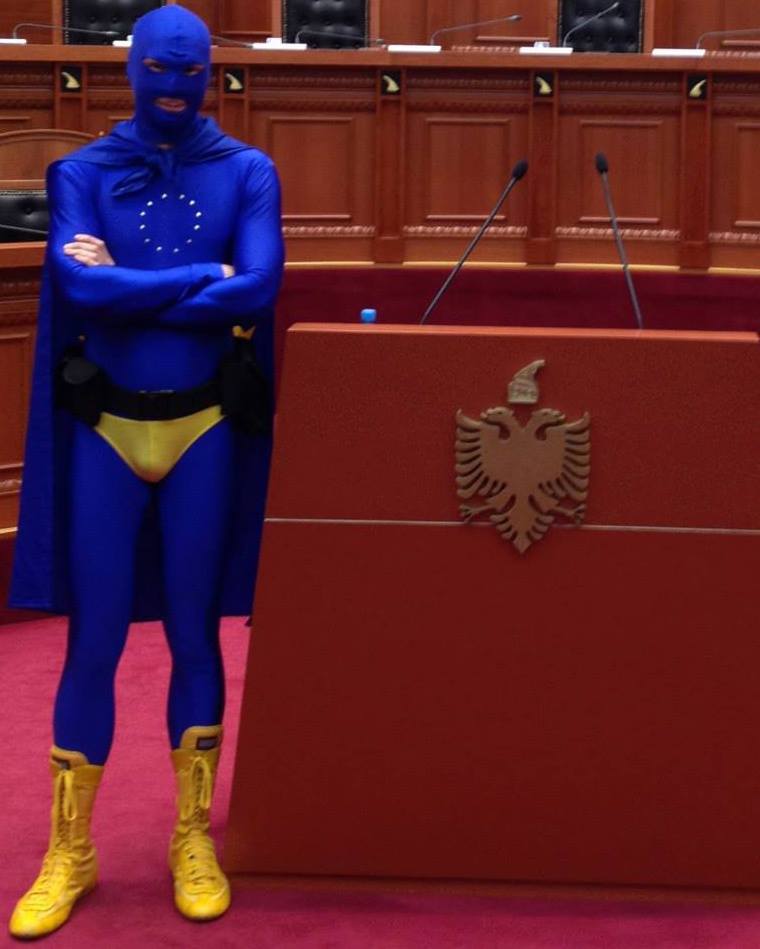 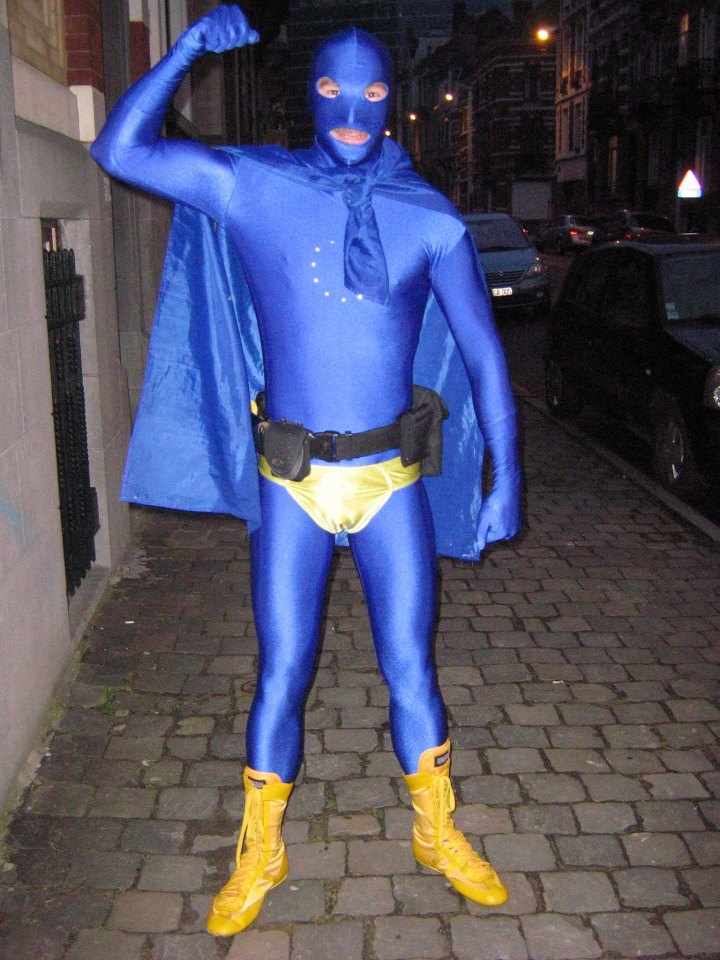 When the original Captain Europe resigned back in 2016, he did an enlightening interview with EURACTIV. Although he did not disclose his identity, which still remains a mystery, he shared how the persona of Captain Europe came to be:

I first came up with the idea in 2006 at a carnival party. I was dressed as a monk at the time. There were various people dressed as various superheroes and I thought, why doesn’t Europe have its own superhero? I came up with a prototype for a carnival costume but then it took on a life of its own after I did my first public appearance as an experiment in 2009.

Although the original Captain has hung up his cape, and a new hero has taken up his mantle, he still fights the good fight on Twitter as @JusticeLeagueEU. When he finds the time in his busy schedule as a full-time desk jockey in Brussels, he tweets and retweets the truth about the EU to fight misinformation about the union.

But the two Captain Europes aren’t the whole story when it comes to the EU’s relationship with superheroes.

It turns out that the EU has a myriad of cartoon superheroes! When I was trying to get to the bottom of Captain Europe’s origins, I found Captain Euro and his crack team of EU-loving superheroes. The character was developed in the 1990s for the EU to promote the union and the introduction of the Euro. So this weird creation is actually an official part of the EU’s PR strategy.

According to his website, Captain Euro a.k.a. Adam Andros is a true child of Europe, born in London to parents of Italian, British and Spanish descent, and has traveled extensively through Europe and forged strong relationships with people of diverse backgrounds. His special skills include: fluency in a bunch of languages, great communicating skills, powers of persuasion, natural affinity for technology, great football skills, and of course martial arts.

In his team are other great heroes such as Europa, a professor of sustainability and archaeological oceanography, Pythagoras 1, a Dr. Manhattan-esque AI developed by Europe’s top scientist at CERN, and Lupo, a European Timber Wolf who befriended Captain Euro after he saved him from the arch-villain Dr. D. Vider (get it?).

Captain Euro and his team retired after the successful launch of the Euro, but they’ve recently been brought back to fight Europe’s greatest woe: disunity.

You can follow Captain Euro’s fight on Twitter @capteineuro where his current mission is to “STOP BREXIT KEEP UK IN EU & EU UNITED!”

But what about the current Captain Europe?!

I reached out to a contact of mine in Brussels to try to know more about the EU’s weird relationship with superheroes. It turns out that he actually knows Captain Europe, but of course didn’t want to unveil his secret identity, but he did give me his contact info. In a written response to TNW, the current Captain Europe explained that he isn’t an “official” mascot of the EU and doesn’t support his role financially, but it often features him in promotional material and he’s in touch with the communication departments of the EU.

He’s not at all affiliated with Captain Euro, which is a part of an EU campaign. Captain Europe is closer to being the people’s champion, selflessly giving up his free time to be the voice of masses:

During daytime, I do work within the EU institutions, being a rather unnoticeable employee. In my free time tough, I can wear my mask and my cape and infiltrate all kinds of high-level European events and meet some of our leaders and exchange with them about ordinary citizens’ concerns.

Or I can go down to the street to a manifestation to show support for a cause, or show my opposition. I guess I can be at the same time a free advertising material for the EU and a reasonable critic of its action. I’d like to be seen as a permanent ally and defender of the EU citizen.

But having a secret superhero identity is just as hard in real life as it is in the movies. Captain Europe admits it’s been more difficult than he anticipated to keep his identity secret and currently only small group of friends knows about his double life.

However, he’s really proud to embody this jolly paragon of European values, even though it means that he’s constantly scouring media sites, hunting down fake news about Europe and exposing lies from our politicians and leaders.

Captain Europe’s goal is to fight in a daily fashion all those that want to destroy or shrink the EU. I hence fight a lot of bots, trolls, bigots, racists and other monsters. Most often this struggle takes place online, with a few exchanges and comments on social media, but when I’m walking in the streets, I also enjoy engaging in discussions with citizens from the street, to promote Europe as best as I can!

I really hope that by making the EU more popular, or more “pop” at least, we will change a little bit the very grim, boring, impersonal image so many citizens have of the European Union.

My ultimate goal would be to see the establishment of a successful and socially just European Federation that would be an example to follow by other countries and regions in the World, to achieve world peace, of course. Which superhero would not dream of this after all?

The EU’s affinity with superheroes might look ridiculous some, but maybe it’s what Europe needs in these divisive times. We never asked for a masked hero in renaissance-style spandex, but maybe Captain Europe is the hero we need.

Captain Europe is always happy to have more help, so if you’re looking to throw on a cape and become a volunteer superhero, feel free to reach out to him on Facebook or Twitter.

TNW is hosting a flagship event in New York City in December. It’s going to be ?. Click here for more info on the amazing speakers, the venue, and how to request an exclusive invite.