Once in a while, as time permits, I get the privilege of working with companies to help them with the messages that they’re trying to send out to the world. I fully believe, however, that understanding that I don’t know all of the answers is probably the most valuable piece of knowledge that I can bring. It’s with that fact in mind that I was incredibly excited when Erika Napoletano agreed to do a class for TNW Academy because I knew that it would give me the chance to learn more.

You see, Erika’s not quite like any brand strategist that you’ve met before. She’s snarky, quick to be self-effacing and seems to have set up a permanent home in the village called “irreverent”. She’s exactly the type of person that I wanted to bring to Academy attendees. Her book, The Power of Unpopular, has been massively acclaimed, and her TEDx talk was an Editor’s Pick for 2012. In fact, let’s start there:

I had the chance to sit and chat with Erika the other day about her upcoming class, brand strategy, the challenges that businesses face and much more. So before her class, I thought it would be great to give you the chance to see what she has to say.

EN: They shouldn’t. I’ve screwed up enough for multiple people. But I believe in helping people to not make those mistakes. I want them to move forward with new and glorious f***k-ups that give them new challenges.

TNW: What’s the biggest challenge that you see companies facing?

EN: No two people have exactly the same problem, but most have one of three – 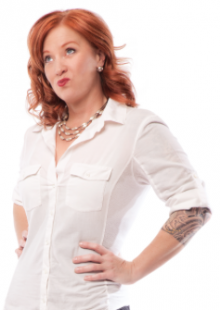 TNW: Your class seems directed at company owners. But what about those who just work somewhere?

EN: I just wrote a post called “Because You’re a Shi**y Leader“. Company culture starts at the top and works down. If you’re at a company that you believe in, and you want to see them do better, you need to take this course. Take this course if you’re yearning to do better for your brand, no matter what your job title is.

TNW: What’s been your proudest accomplishment?

EN: I walked out of a six-figure job and had no idea what was next. The next week, I took a job for $33,000 per year as a junior copywriter…but I was so happy.

TNW: If you could pick a favorite part of your job, what would it be?

EN: One-on-one consulting. My “Buy Me Coffee” sessions. [TNW: Erika points out, in a blog post, that her Academy session is a great alternative to those who are a bit too cash-strapped for her one-on-one option.]

TNW: What about those people who can’t enact change in their companies?

EN: You may not be in the right environment, or on the wrong team. Or if it’s your own company, you may have lost sight of the goals. The number one demand that anyone has is this – make my life better. One of the biggest challenges to that is that people waste time. It’s the most important sin in business.

The bottom line is this: When I come to a company or business owner, they should be able to tell me in 15 seconds who they are, what they do, why they’re different and why I as a customer should give them the time of day.

TNW: You’re a pretty brash person. How does that work when it comes to helping people?

EN: I look to offend one person per day, because it opens up a place in my time for someone else. I try to be actively polarizing. If you’re interested in doing better, and you’re never going to turn down the volume on your ambition because someone else thinks that it’s too loud, then you need to attend my course.

Erika’s class, “Losing Traction? Find Yourself” comes to TNW Academy on June 19th. We are purposely keeping the class size small, to allow for great Q&A, so sign up while you still can.