Dharmesh Mehta, Senior Director Windows and Windows Live Division at Microsoft is currently on a European tour. Through jet lag and a hard travel itinerary he may not know what time it is, but he certainly sees how the future will work with cloud based computing and Microsoft’s SkyDrive.

If you have been following posts on The Next Web about Microsoft, you’ll know that the company has been very active lately, developing its cloud capabilities and working out ways to share across devices.

The cloud sector is still in its early stages of development, consumer awareness is nowhere near at critical mass, but getting into the space, even when you’re not yet in the minds of prospective users, is a good idea as the field sees evolution and growth.

Mehta has been working with the SkyDrive team for about five years and feels that now is the time for Microsoft to raise the stakes, “SkyDrive is interesting. We’ve been in bits and pieces of it for many years, last year was the big year where we saw that this is the right time both between what we do on our own and how it plugs in to other devices. It’s a big coming out party for SkyDrive.”

The way that Microsoft looks at cloud computing is intriguing. It acknowledges that the current space is somewhat divided through communications like Hotmail, Messenger, Gmail and others, storage, which we might associate with services like DropBox and Devices, so how we can get to the cloud and from what. 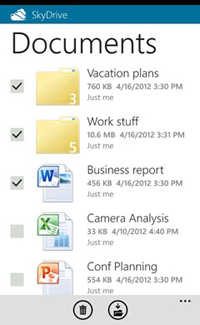 Mehta and his team have been working on ways to make the connections between these three areas easier. “They all cross over,” he notes. “When you’re on a device you use apps, in apps you use files. They’re not so different, but the industry has been siloed. With SkyDrive our vision is to do these things amazingly and work across these divisions.”

The corporation has been hard at work on this too. The web experience for SkyDrive was revamped last year with the addition of HTML5, the service was then plugged into the Word. Windows phone was released with SkyDrive built in and the access that was applied to Word was opened out across other Microsoft Office clients.

Apps for Windows phone came soon after and when Windows consumer preview came out, there was a new Metro app to make sure the new OS was right up in the cloud with everything else.

Last week a selection of apps for Window’s 7, 8 and Vista arrived along with ‘Fetch’, which allows users to get to files on their other devices or PC from anywhere else with a secure link. Paid storage also appeared; where previously SkyDrive had a cap, now extreme users who will fill up the available 7 gigabytes can get more room for their data.

Mehta says, “We considered a set of scenarios and we want to make storage free for most people. We also want to allow users the freedom of extra storage and make that as cheap as possible. At the moment, 99.94% of our users use 7 gigabytes or less.”

The list continues with new apps for the iPad, updates to Windows phone and iPhone apps, refreshed Office and Open Document support, shortened URLs, sharing files straight to email, Twitter and Facebook. Basically for people who consider Microsoft to be the tool of the workplace or large corporations could do with reconsidering these social and sharing changes that are aimed directly at the domestic market.

If you’re feeling that this is a lot to take in, there’s no time to relax, Mehta assures us that the end is not in sight, “We’re in no means done here, there’s still a ton to come from SkyDrive.”

There are many contenders in the cloud space already, jostling for their position to take the biggest bite from an emerging market. Microsoft has a good trick up it’s sleeve for creating an impact though, and that is familiarity.

SkyDrive apps plug right into a computer system with little disruption. Once an app is installed, the files you store there are accessible from the usual file library you may already know.

So there is no new interface to deal with, no tricky instructions to read or methods to learn in order to work with files. When you take photos with a Windows phone, the images are automatically uploaded to the cloud and shared with linked devices. From there they are navigable as you might with any other file that is on your computer. Not having to learn a new system is definitely a bonus.

The apps bring a nicer experience to SkyDrive and Microsoft is working on opening them up to other platforms, but Android has not been invited to the party.

Don’t worry too much through, SkyDrive APIs are available and Android developers have already created tools that look and feel a lot like the Microsoft versions. Mehta acknowledges that Android is missing in the line up but says that they are supported and that developers are making some cool versions for the market; “We advertise the outside developer’s apps on the SkyDrive download page. So we can certainly help with marketing.”

For those who are on older computers or hoping to share their image or video files on a much bigger screen, the browser is the way to the SkyDrive cloud. There are no apps yet for smart TVs but again, the API is there for others to test their mettle. Mehta says that features from both consumer and enterprise often cross over as Microsoft’s developers note what does well in one and could serve the other. Being that big certainly has its benefits.

For sharing in the workplace, Microsoft already has Sharepoint on the market, SkyDrive is very much aimed at the consumer. Though there will be cases where smaller businesses may want to use this cloud for work, within larger, international corporations, security and access will be an issue and Microsoft is not working on changing that.

But as Microsoft Office and other products are so familiar around the world in computing, there is bound to be a cross over. This is more dependent on the individual user and their place of work.

SkyDrive is very important to Microsoft at the moment, Mehta feels that it underpins the future success of existing apps, “Office is our biggest app.  If you think about Windows, Windows Phone and Office; if they were not connected they would be in trouble. The solution is SkyDrive.”

So is the world ready for the cloud? Mehta is not sure that the market is quite ready, but he feels that Microsoft will be there when they are, “We have work to do there. There are enthusiasts we can work with when a product is in its early stages and this is the time to go big and broad. We don’t have huge awareness now but we’re about to turn that on.”