Matthew Keys, the former deputy social media editor at Reuters who was fired over alleged collaborations with the Anonymous Group, has given a sneak preview of a new project he is working on, aimed at serving news junkies and media professionals with breaking news.

The project is an aggregated news site — located at Matthewkeyslive.com, as TechCrunch spotted — that serves up a stream of breaking developments and the latest goings on. Keys himself picks and aggregates the content from Twitter, App.net, Reddit, news organisations/feeds and other sources online, adding his own analysis into the mix.

Keys previewed the site for the duration of Philadelphia Mayor Michael Nutter’s press briefing, but it has since disappeared back offline after said briefing finished.

MatthewKeysLive.com is currently open to all for the duration of Philadelphia Mayor Michael Nutter’s press briefing (expected 10pm ET).

While it was basic in appearance and buggy on mobile browsers — as you would expect of a preview product — the idea behind it is interesting, and the site relayed information very much like a wire with a twist of social; each image and update linked back to a source to provide further information.

Each update contains also timestamp and is hashtagged, presumably for search and archiving purposes.

Interest piqued, TNW exchanged emails with Keys to get a clearer understanding of what the site is about, whether it can make money, and if it is a sustainable project for him to focus on post-Reuters.

Read on for more:

TNW: Does the world need another place on the Internet to go to for news? What are you aiming to do differently to the rest?

Keys: The problem isn’t that the news market is saturated with publications, the problem is the news market is saturated with competition. News outlets compete to be first, to match reports, to get exclusives (and then other outlets match those exclusives). Competition is great in that it can spawn innovation in an industry, but what we’ve seen lately is that competition has been yielding to recklessness. That’s evident in the number of breaking news stories and “exclusives” that organizations have had to retract because of speed or sloppy research (yes, the irony isn’t lost).

MatthewKeysLive.com is not being built to compete against news organizations or their products — it’s being built to work with them. The site isn’t going to compete with news wires, services that verify content or aggregation blogs. If anything, I hope it will help supplement them. My focus is on getting this product in front of every journalist and every news app developer in the world. To do that, I have to build something that delivers news quickly and accurately, contains a vast amount of raw content that helps supplement coverage on a story, is easy to use and is affordable.

Is there a business model at this point, can you explain that?

This site has two goals: The first is to build a service that is easy to use, moves information quickly and has a generous amount of relevant media related to the stories that are covered. The second is to provide a working example on how a next-generation human-powered wire should function.

I’m exploring several plans right now on how to generate revenue for the site. Generating revenue is important to keeping any service sustainable. I believe if you create a great service that fulfills a need or functions better than what others are offering, people will back it. MatthewKeysLive.com is not going to make anyone rich. That’s not the goal. The goal is to get this in front of as many news professionals and media consumers as possible and to provide a working example as to how a 21st Century ENG wire should operate.

(Keys did reveal, via Twitter, that the site will charge a fee that is “a lot less than subscribing to a wire”, if it launches in full.)

Who built the site, any interesting tweaks or features to help cover breaking news, bearing in mind that regular blog systems are not always suited to that?

Instead of building software and coding a theme from scratch, it was easier to use software and a theme that was already available and build around that. The site is built on WordPress software using the theme “P2” by Automattic. The theme has been heavily modified (by me) to serve specific purposes and features that are currently on the site and will be launched in the future.

The site has a pretty consumer-facing approach, is that also part of the target audience?

My number one focus as I build the site is to make something that’s easy for news professionals and media consumers to use. This site shouldn’t need a manual or a tutorial to use. You should be able to look at a part of the site and know exactly how the features work.

It is still in beta now, but do you have a planned launch or timeframe?

Finally, is this your sole project right now? What plans do you have career-wise post Reuters?

I’m not sure what will happen in the future — it’s possible that the union that is fighting on my behalf will be successful in their mission of getting my job back at Reuters. It’s possible that some of the organizations I’ve been speaking with over the past few weeks will make me a job offer. It’s also possible that those things will fall through. I’m spending a lot of time and putting a lot of focus into MatthewKeysLive.com right now. I’m taking things one day at a time.

(Interesting to note that Keys hasn’t given up hope of a return at Reuters — which seems, to us at least, unlikely in practical terms even in the event that he retains his position.)

Quite ironically Anonymous is working on a news site too, having raised $55,000 from Indiegogo. The group intends that the site will maintain an independent agenda and aggregate/collate breaking news and stories from citizen journalists and independent news organizations.

That gives it some similarities to Key’s project, although there is a fundamental difference in that Anonymous wants to offer a different agenda to mainstream media, whereas Keys aims to showcase and work with best media companies and reporting online.

It may be too early to tell, but it is interesting to see Twitter power users — such as Keys and Anonymous — branching out with news site that leverage their followings and reputations as news gatherers.

Breaking News was the first to really master the art of aggregating news on Twitter, and it sold to MSNBC in January 2010 after which it expanded to launch a dedicated Breaking News website and host of mobile apps.

However, the rise of link/news curation and personal social media brands (despite some controversies, Keys is widely-respected as a curator of news) could yet give potential for others to follow the Breaking News lead some three years later. With neither Keys’ nor the Anonymous site actually shipped and available to peruse, it is too early to tell, but this is a trend worth keeping an eye on. 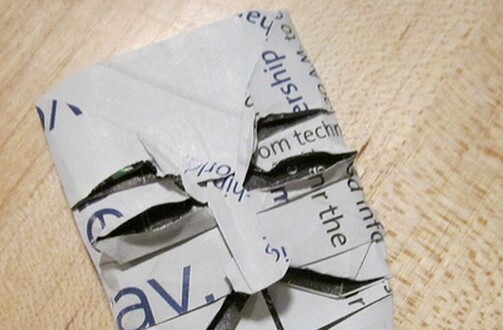