This article was published on December 6, 2014

There are few things digital artists are more finicky about than color, but for Photoshop and Illustrator users, color selection and tweaking promises to get easier and more precise with a fresh upgrade to Anastasiy’s MagicPicker plug-in, targeted to painters, special effects folk and comic artists.

The new version 4 release, offering updated color manipulation for your brushes, marks a complete overhaul of the software. The plug-in is now compatible with Adobe Photoshop and Illustrator CC 2014, and its brand new color engine, built from ground up, is designed for faster performance.

New features include an updated tone lock, which allows users to preserve color tones even while adjusting hue or saturation. A new color temperature wheel — which supports tone lock — helps you control and limit color gamut for image fine-tuning and lets you specifically choose warm or cool color palettes.

Optional big color swatches give you large onscreen samples to aid in color perception. That’s in addition to the Triangle, Box and Diamond modes that show additional shades of brightness and saturation on the color wheel.

A compact mode shows only two colors, and now you can see the old color while choosing a new one. Additionally, the update improves the panel design, interface and flyout menu for all Photoshop color themes and Illustrator dynamic themes. 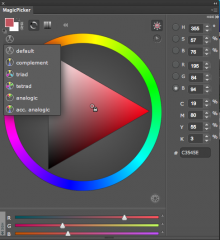 The plug-in, available for $19, is cross platform Mac and Windows compatible with support for Illustrator and Photoshop CS3 and later.

A free trial version, called ColorPicker, is a very streamlined version of the MagicPicker plug-in, which you can download to test out the interface.