LoveThis, the UK-based recommendations website has launched its new service and mobile app. The service, which began as website only, has made changes based on user feedback developed it with some of the £2m funding it has raised.

Launched last year, LoveThis takes a look at the problem of recommendations and how we use them. Company founder, Alexis Dormandy says that the recommendation systems available to us could do with improvement, “I’m in a pub, someone recommends a book to me and by the time we leave, I’ve forgotten it. By the time I get to the bookstore it’s totally gone from my mind and by the time I want to buy something for holiday reading, I can’t even remember who recommended it to me.”

Sound familiar? If you’re prone to forgetting these recommendations and you don’t want to have to search and probe Facebook and Twitter to find that elusive reference, then having LoveThis handy will undoubtedly appeal to you . 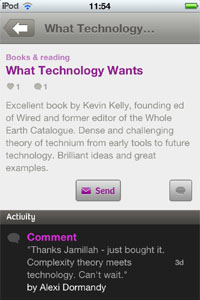 A unique feature of LoveThis, is that you don’t need all of your friends to sign up. If you are a user, you can send recommendations to your friends on Facebook or via email and their replies show up inside the app, they don’t have to sign up if they don’t want to.

“Rather than limit word-of-mouth to one platform, one social network, or one app, we’re excited to offer users a simple and efficient way to share recommendations across everything, from your mobile phone, the web, to Facebook and email”
Dormandy says. “It’s designed to be the anti-app. The bottom line is that no one has cracked the ‘giving’ in giving recommendations, but we have with LoveThis.”

This makes sharing easier for people who don’t use particular smartphones and helps span a generational divide if your grandmother only uses email, she can join in too. You can answer her replies from inside of LoveThis. It also means that if you suffer from app-overload and barely spare a glance for anything that is not on the front page of your mobile device, you can cut down on the amount of apps you need to use.

There are many recommendation sites online and available as apps, but LoveThis brings contacts closer by allowing users to choose a tight network of friends for endorsements. LoveThis connects users with only those whose opinions they trust and value most for recommendations across a wide variety of categories, including restaurants, hotels, activities, shops, movies, music, books, television shows, local services and more. 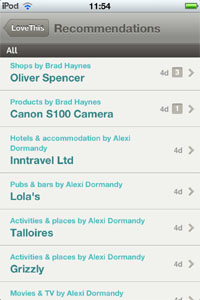 “As more and more consumers turn to the Internet and social media for opinions and recommendations, it’s more important than ever for them to trust the information they find” says Dormandy. “With LoveThis, consumers can cut through the barrage of anonymous noise to connect and share the products and experiences they love with people they know they can trust.”

When LoveThis initially launched, it received about 40,000 recommendations in only eight weeks. Dormandy says that this is down to the closer social interaction of a private network and that people are motivated to say more about the things they want to share when they apply them to specific friends.

Keeping your network locked down also means that you can avoid marketing messages and sales pitches. Word of mouth and a circle of trust is better developed when commercial outlets are unable to post inappropriate messages in a network.

The LoveThis app has a clean interface and is easy to use, but that does not mean that Dormandy can put his feet up; plans are already in motion for new features to come soon. Expect maps to appear in an update in coming weeks. If you look for recommendations that are related to locations within the app, soon there will be maps available with sites that come with your friend’s blessings. This could be very useful if you are in an unfamiliar area and looking for a quick tip on where to go.

Themed curation is also on the drawing board for future iterations. “If you’ve taken a trip to a specific country or city and you want to make a list of recommendations for your friends if they choose to go there, you should be able to curate a theme in the app soon. So if you went to say, Argentina, you could pick out all the restaurants, scenic views and historical landmarks that you liked and hand them over as one selection.”

The app is available for iOS only at the moment. So, instead of having to search a site for restaurants or rack your brain for that book someone told you about, this is a handy tool to have in your pocket, even if it’s just for browsing for something new.