Online movie rental and streaming service LoveFilm has gone from strength to strength since it was launched in London way back in 2002, but its CEO Simon Calver has announced that he’s moving on to pastures new…at Mothercare.

After being acquired by Amazon, LoveFilm grew its staff by 20% last year, announced a number of new content partnership deals and hit the magic 2m members milestone…just in time for Netflix launching in the UK. The future was looking pretty good for LoveFilm, but Calver has decided to change direction and move away from the tech industry and into the expectant-mother/children’s-clothing industry. Makes sense.

“After nearly seven amazing years as head of LoveFilm, I have decided the time is right to hand over the baton to the 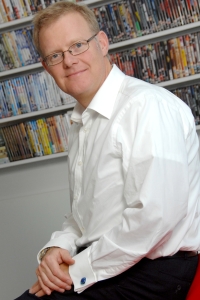 next leader,” said Calver in a blog post yesterday. “Growing this company has been a fantastic experience and I have had the pleasure of working with a truly talented team, real innovators who introduced a brand new way for millions of movie lovers to enjoy films. They provided our customers a vast selection of over 70,000 DVDs and Video Games, and, more recently, led the way in streaming great titles through PCs, TVs, Blu-ray players and games consoles.”

Calver will be handing the CEO reins to Jim Buckle, who has directed LoveFilm’s commercial and financial operations since 2006. “He knows LoveFilm inside out,” says Calver, “and [he will] now lead the whole business. LoveFilm could not be in better hands and I wish Jim and the whole team tremendous success.”

It’s an interesting career move for sure, and it would probably be unfair to look too far into this departure for meaning – seven years at a company is a long time, and it’s likely he was just looking to start afresh somewhere else. That said, the timing is worth noting, with Netflix recently launching its service in the UK and competition really starting to heat up – could Amazon be lining up some major moves for the company this year?

Either way, 2012 will see many new developments within the movies-on-demand space in the UK, and Amazon’s LoveFilm is sure to play a pivotal role.