I finally got an Xbox this year. Yeah, I know, I’m a bit late on the uptake. But I’ve always been a PC gamer, rather than a console one, so I have my excuse. But one thing I quickly found was that, unless I was willing to blow the house apart from high volume levels, I needed to get some headphones. As is common for me, if I’m going to buy something, I’m going to review it for TNW first so that you can learn as I do. This is no exception.

So I dropped emails to Logitech, SteelSeries and Turtle Beach. These are the three manufacturers that kept getting recommended time and again when I said I was looking for a wireless Xbox 360 headset. Logitech and SteelSeries were quick to respond. Turtle Beach, for whatever reason, decided to ignore our requests. 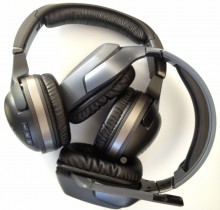 My only requirement was that the headset had to be wireless. I also invited each company to send along a wired alternative, for the “budget buy”. Logitech sent over its F540, SteelSeries countered with the Spectrum 7xb. These are no-frills wireless headsets, with a few connection options but no surround sound. They’re priced close to the same, with only $30 separating the two. The F540 retails for $150, the 7xb for $180.

While it’s a bit of a subjective matter, sound quality to me is defined as the ability to accurately reproduce audio. Both of the headsets do an admirable job, though I prefer the simple approach of the Logitech device. SteelSeries has a novel idea that it calls Exactsnd. It’s 3 different settings that have their strong points:

I found Performance to be handy in FPS games, but lacking otherwise. Immersion was…disappointing. It tended to sound muddy and have a digital “warble” to the sound. Entertainment was good, but a bit over-emphasizing on the bass, which would cause a lack of response across other frequencies. Typically, I use the 7xb without any sound setting.

Logitech’s F540 includes no sound-enhancement other than the headphones themselves. While still boosting the bass a bit more than I’d like, I found the audio reproduction to be fairly accurate otherwise and generally pleasurable to listen to for long periods. 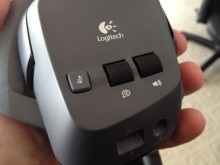 Logitech’s simplicity approach is effective here. The F540 has 2 rolling knobs on the side, 1 to change voice volume and another for game volume. There are no detents or stops on the knobs, though, so you’ll have to just roll until each is comfortable for you.

The flip-down microphone activates itself when it’s in the down position, but there is a mute switch on the right ear cup, as well. This is my problem with the headset – there’s no way to mute it without taking your hand completely off of your controller. In fast-paced games, that’s a big problem.

The F540 is supremely comfortable, with huge cups that cover even my admittedly-large ears. The cups and headband are nicely padded and provide great isolation from outside sound. I’ve frequently gamed for 5-6 hours without any discomfort.

SteelSeries’ 7xb features smaller cups, a tighter overall fit but is still quite comfortable. However, I wasn’t able to take more than about 3 hours with them before needing to have a break. 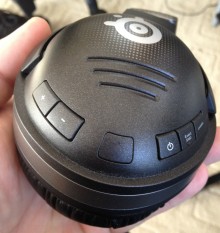 Audio control on the 7xb is good, but not great. There are volume rockers on the right ear cup but they’re a bit difficult to find and press accurately. The glowing credit that I will give to the 7xb is that there is a mute switch for the microphone built into the controller connector. This is not only handy, but it just works better for me.

The microphone on the 7xb follows the SteelSeries method of being retractable into the ear cup. It’s also infinitely more adjustable than the Logitech mic. Unfortunately, just having a good mic and mute switch doesn’t rule out the otherwise-annoying buttons.

Both headsets do a great job in this department, but they do it in different areas. SteelSeries opts for features related to the sound, while Logitech goes for usability.

The 7xb features SteelSeries’ LiveMix function. This regulates game volume versus voice volume and it does so constantly, so as the game gets louder and more intense, the voices still come through. Logitech’s roller knobs are no contest against LiveMix. SteelSeries is the hands-down winner here.

The F540 has dual inputs, which are selectable from the headset itself. This is quite handy if you want to hook up an external source such as an iPod (via an included auxiliary cable) and walk around the house. Just don’t go further than about 25 feet or so. Logitech’s receiver unit also looks a bit classier than the offering from SteelSeries.

SteelSeries opted for AAA-sized batteries to power its headset. I average about 18 hours of gaming life out of a pair. Logitech takes a rechargeable approach, accessed by a USB port on the front of the receiver. Expect about 10 hours of constant game time, but you can then plug in the headset and continue to use it while recharging (albeit slowly).

It’s a matter of preference, I suppose. I like the longer battery life from the SteelSeries but I hate running out of batteries only to find out that I don’t have more. That’s a leg up for Logitech.

Both headsets use wireless RF technology. This is where Logitech really shines. Though SteelSeries claims a range of about 35 feet, I found that the receiver didn’t do a very good job of off-axis communication. Sometimes, even sitting 2 feet in front of the receiver, I’d get dropouts. For a headset nearing $200, that’s unacceptable. The signal from the Logitech device has only faded on me once, but it was right before the batteries died and a recharge fixed the problem.

I’m a big fan of SteelSeries products. I’ve raved about the company’s Diablo 3 headset, as well as the Siberia Neckband among others. It’s hard for me to be harsh on the brand, but I have to in this case. Even if it didn’t cost nearly $200, audio dropout is inexcusable for a premium-level device.

Logitech has had a great run with audio products since the company decided to get serious about them a few years ago. I’ve used and enjoyed a number of them, and the F540 is no exception. With a mix of the right features, strong audio and rock-solid performance, Logitech is the clear winner in this showdown, no caveats needed.