This article was published on February 10, 2013

Silicon Valley has its fair share of venture capitalists, eager for a chance to get in on the ground-floor of the hottest new startup. We hear about it practically every week when there are funding announcements. But sometimes we don’t hear what companies get beyond the financial support. Just who are the people behind the pursestrings of startups and how have they guided startups from relative obscurity to rockstar status?

Earlier this month, we spoke with Shervin Pishevar, a venture capitalist. If you’ve ever chatted with this man, you’ll know he’s a very interesting person. There’s an aura of je ne sais quoi that resonates around him, and he understands what entrepreneurs are going through — he was one himself.

Described by one startup founder as a “big soft teddy bear,” Pishevar has been labeled as one of Silicon Valley’s “Superconnectors“.

The value of sacrifice

Having immigrated with his parents to the United States in 1976, Iranian-born Pishevar has led a life that personifies the struggles to achieve the American dream. His father came to the country to pursue a master’s degree, but returned to Iran in 1978 prior to the revolution. For him, his experiences during that chaotic time had helped to shape who he was to become in his professional life. In an interview he gave in 2009, Pishevar says it “forged in our minds the sacrifices that our parents were making for us.”

One of the things that drove Pishevar was the drive to learn and study. Back in the US, he attended the University of California-Berkeley and pursued a degree in molecular cellular biology. When he was 20, he published an article on human rights and doctors in JAMA focusing on the details of torture and doctors involvement — it subsequently helped lead to the Istanbul Protocol, which banned physicians from being involved in any form of torture. 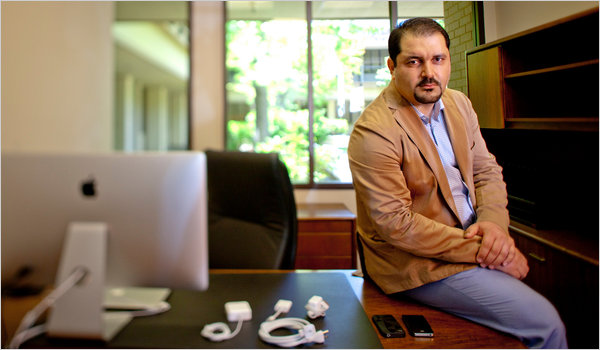 Rather than go into a medical profession, Pishevar decided to become an entrepreneur and start his first company — something he says upset his father, but the younger Pishevar felt he had to go after his calling.

His foray into technology began in 1993 when he came up with the first idea for a company: “At the time I was doing malaria research and was using the library search system. I realized I could search the whole web for information and I found a Japanese researcher who was doing research on the same peptide that I was working on.” From this, Pishevar saw that through technology, he could benefit thousands of people compared to if he was a doctor.

This entrepreneur eventually would introduce the world to its first company, WebOS (formerly MyWebOS), which focused on the web as a platform where he believed applications would reside. It spun off HyperOffice, in which he is still a shareholder in.

Pishevar’s other endeavors included Webs.com (which sold to Vistaprint for $117.5 million) and Social Gaming Network (acquired by Mindjolt in 2011). In addition, he went on to be the chief application officer and general manager at the Mozilla Corporation, while also doing some angel investing. In all, Pishevar funded 50 companies, including Cherry, Socialcam (sold to Autodesk), Klout, Aardvark (sold to Google), Dollar Shave Club, Gowalla (sold to Facebook), TaskRabbit, Rapportive (sold to LinkedIn), Votizen, and others.

All of this has led him to his next chapter in 2011: managing director at Menlo Ventures. Helping to oversee a venture capital fund with more than $4 billion under management, Pishevar has been on the lookout for the next thing in the social web, consumer Internet, and mobile space. He has invested in companies like Uber, Cinemagram, Fab, Getaround, Machine Zone, Mr. Number, Poshmark, Shaker, and Tumblr.

While his career has taken him on a variety of adventures, Pishevar has never stopped thinking about others. If you ask him about his mantra, he’d say:

Surround yourself with value creators so that you can continue to be open with your heart and mind in an environment based on grace, merit and generosity. 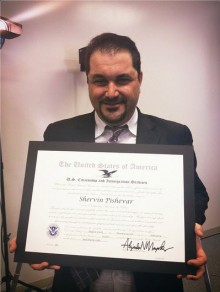 By looking at the life that Pishevar leads, he really takes the mantra to heart as he’s an avid and vocal supporter of the tech community and those less privileged and underserved.

On his resume, Pishevar has been named one of 10 members of the UN Foundation’s Global Entrepreneurs Council, serves as an Entrepreneurial Ambassador for several US State Department delegations, and also on President Obama’s Summit on Entrepreneurship. Recently, he was named one of 100 naturalized Americans to be presented the US government’s Outstanding American by Choice award, which recognizes the civic participation, professional achievements, and responsible citizenship that Pishevar has demonstrated as an American.

In addition, he has been an active volunteer in other philanthropic ventures, including helping raise money for clean water in Africa through Charity: Water, and also helping stop the plight of the suffering with Invisible Children. In 2011, Pishevar spoke at the Fourth Estate event at the University of San Diego to supporters of Invisible Children, which organized the Kony 2012 campaign:

And there’s no signs of Pishevar slowing down his effort to bring opportunity to those less fortunate. Last week, he announced the creation of The Cyrus Prize, a $100,000 genius grant for Iranian innovators. The first prize will be awarded by the end of 2013 and was inspired by The Cyrus Cylinder and Cyrus the Great. As he told TechCrunch in an email: “Human capital is the greatest untapped resource. Iranians talent is worth more than all the oil and gas reserves in Iran. However, it is still untapped.”

For this Iranian-born venture capitalist, this prize has a personal connection — he says his first angels when he sought funding were from the Iranian tech community.

And while he has traveled the world and supported great causes (and will most likely continue to well into the future), Pishevar is also known as a rather spirited supporter of startups and the technology community.

Recognizing the need for bringing in talent from around the world to help spur innovation, he helped lead the charge to seek passage of the Startup Visa Act.

Introduced into the US Congress in 2011 by then-Senator John Kerry, along with Senators Richard Lugar and Mark Udall, it aims to solve the needs of entrepreneurs by giving them employment-based visas, which they’re currently denied because they own a significant stake in the sponsor company. In addition, the act would enable investors from other countries to get a visa in exchange for starting a US business with $1 million in capital (or $500,000 for economically targeted areas) and the creation of at least 10 jobs in the country.

Some might also think that Pishevar has the ear of the President too. After all, he has been acting almost as an advisor to Obama, and seems to frequently meet with the President when he’s either in Silicon Valley or at the White House.

But Pishevar is an astonishing supporter of startups as well — just ask Uber or Getaround, two companies that he’s invested in. Sure, he has a financial incentive to see that they succeed, but it’s perhaps his personality and character that draws people to him. As Uber co-founder Travis Kalanick tells us, there’s a bit of “Shervin’ness” that is appealing.

Getaround, the peer-to-peer car sharing service, chose to take funding from Pishevar when they sought their Series A round. Founder Jessica Scorpio says that she originally connected with him five years ago and found his personality “infectious”. To her, she found Pishevar to be very proactive and creative — she says that he’s always coming up with ideas for her company when he’s out traveling the world. Working with Pishevar has been fun and refreshing, Scorpio says, and since he’s typically invested in companies tackling big problems, working with Getaround was pretty much up his alley.

For Kalanick, the sentiment was quite similar and you don’t even need him to tell you that — just look at Pishevar’s Twitter account and you’ll frequently see photos of his support for the company. Kalanick has worked with Pishevar for about a year now, but says that he has “a big heart” — he’s an optimistic person who always approaches every situation upbeat and positive, something that he seeks to bring out in others as well. 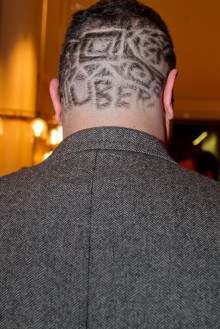 When Uber went to raise its Series B round of funding, Kalanick says that they went with Menlo Ventures because of Pishevar — for the company, it was more interested in the partner than the deal. From his perspective, he sees Pishevar has having authentic relationships, something that allows him to connect you with anyone on the planet.

What Scorpio and Kalanick have told us sounds logical and it’s clear that Pishevar is a spirited evangelist for his companies — after all, how many investors do you know would shave company logos (see here, here, and here) on their head?

Fellow investors also find Pishevar’s character fascinating. We spoke with #DominateFund’s Ben Parr who believes that Pishevar’s labeling as a hyperconnector is aptly suited for him:

Shervin has a gift as a connector. You can’t help but love him. I think that’s why so many entrepreneurs trust him. He’s charismatic, but more importantly, he has a righteous heart. He’ll go to the mat for his entrepreneurs.

Jacob Mullins from Shasta Ventures agrees and adds that he admires Pishevar for his “honest and pure excitement and passion towards life.” Mullins tells us:

It’s a deep, innate love of life that few people have, and it radiates outward from him into everything that he touches…He’s all about people, creating and building strong relationships with individuals. In his investment life, he’s taking the same approach and I’m confident he’ll be very successful.

Pishevar’s “success” is probably not measured in just dollar figures, but rather the amount of lives that he’s touched and changed. From all his experiences thus far, if you measure the value derived from his efforts, it would probably be safe to say that he’s already been a success.