Lipton’s Brisk Iced Tea has joined forces with Star Wars, creating a mobile game (dubbed Brisksaber) to help launch Episode I: The Phantom Menace in 3-D. The free mobile game features a story line that allows fans to unlock new characters and objects based on the nationwide redemption of codes found on the back of caps of specially marked Brisk 1-Liter Iced Tea.

In the app, Briskified versions of two iconic Star Wars characters, Darth Maul and Yoda, face off for the first time. It’s a bold take on an improbable fight which could only happen in the universe of Brisk, delivered through the next generation stop-motion animation the brand is known for. 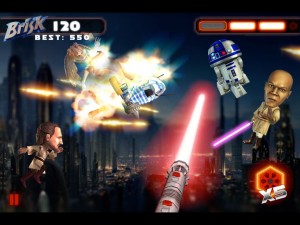 You use your finger to swipe the lightsaber killing various characters in space as they fly across the screen . Warning: The game has the same addiction levels of Angry Birds and after 10 minutes of playing I was still unsatisfied at my poor lightsaber skills so headed back to The Dark Side for more.

The 3D game invites players to choose their side—The Light Side or The Dark Side with two modes—Time Trial or Survival. Players can opt to share their scores on Facebook and Twitter. Top scoring players will be shown on a leaderboard on Facebook.com/Brisk and will receive a special call-out from Darth Maul beginning in February.

For a social media campaign of a brand bridging the offline-online worlds, Brisk has done well as you have to buy the product in the real world to get further in the game, and the game is addictive, enticing you to buy more iced tea to get a higher score. You can access the app in the iTunes store here and Android here. The Uncap the App promotion and limited-time Darth Maul packaging are available until April 30th.

You can check out the face-off in the video below:

The question that remains, of course, is whether the app will actually drive notably more sales of Brisk Iced Tea. Give us your thoughts – good gimmick, or just a gimmick?