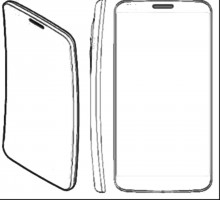 Rumors of a smartphone called the LG Z that has a curved OLED display surfaced yesterday, alongside the suggestion that it would be announced imminently. However, these rumors were partly wrong.

According to one source familiar with the plans, the device will arrive before the end of the year but it won’t be called the LG Z. Instead, it will arrive with the moniker of the G Flex, and will use LG’s new Plastic OLED (POLED) technology – which was already shown off earlier in the year.

Other specifics remain unknown, but with Samsung and LG now both racing to be the first to bring a smartphone with a flexible display to market, it shouldn’t be too long before we actually start to see some in the flesh. The image on the right is a filing with the Korea Patent Office for the flexible handset design concept, though actual in-the-wild snaps remain elusive.