During the Twitter Flight event, the social network teamed up with Jawbone to introduce the Drop app in a big way. Attendees could control the playlist while they waited for the keynote to start.

Drop is different from the usual game of trying to get some sort of social recognition IRL. After you left the event you could create your own “big board” and have all your friends (and potential) enemies on Twitter control your playlist with tweets.

I downloaded the app, connected my Rdio (it also works with Spotify) and Twitter account and put out the call. Between the trolling of Bananaphone and a Barney the Dinosaur song sent by my editor Josh that will haunt me for years to come, I was happy to find that my Twitter followers filled my playlist some amazing songs. 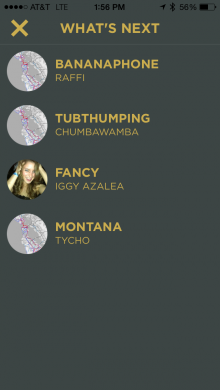 I tend to play the same albums while writing. Suddenly I was treated to old favorites and songs new to me. Some in languages other than English. It was an afternoon dance party powered by Twitter and it was glorious. Except for the Bananaphone and Barney the Dinosaur songs. Those sucked.

What makes Drop different from other services, including now dead Turntable.fm is that you don’t have to go to a special site or even download the app to participate. All it takes is a tweet with a song and band name to control a friend’s Drop playlist.

Hell, you don’t even need to drop the name of the band and you’re sharing music with a friend. 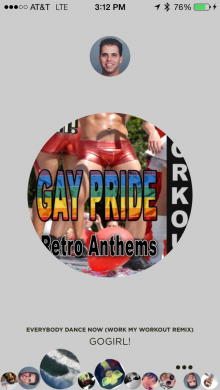 That doesn’t mean the app is perfect. The Drop it Like its Hot version I was served up by the app was not done by Snoop Dogg. It was some horrid imitator. The same thing happened with Everybody Dance Now by CC Music Factory. The CC Music Factory track is missing from Rdio, but the Snoop Dogg track is there.

The iOS only Drop app has a deceptively simple interface. Tap a currently paying song to play and pause. Swipe up to skip to the next song in your queue. Swipe down and you’re presented with a search field. Below that is a list of recommended tracks and below that, are all the recently played tracks. Helpful when you want to know the name of the track someone sent to your playlist.

If you tap on the avatar of the person who’s song is currently playing, you can Drop that song to other folks using Drop. And finally, if you click on the three dots in the lower right- hand corner, you can see the tweet that triggered the current song.

You can also invite friends, which just tweets that you’re using the app and that your followers should reply to you with songs. 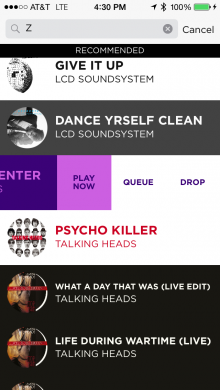 It made the end of my day better and when my followers started to disappear because they were leaving work or watching the World Series (Go Giants!) the app just kept playing music based on what I was listening to earlier. You can also add music to the queue by swiping left on songs you’ve searched for.

It’s nice that the dance party doesn’t stop once your followers shut down at the end of the day, but it’s not really what Drop is all about.

I shut down the app and started listening to my carefully curated playlists again. But tomorrow I’ll hit up Twitter to control my music. And I’ll do the same the next day and the next. Maybe Drop’s incredibly low barrier to entry will mean, unlike Turntable.fm, it’ll stick around.

Either way, I’ll expect all your Drops tomorrow.