Eduardo Henrique is the head of U.S. operations for Brazil-based Movile, a mobile platform for content and commerce.

As announced in Brazilian press in October of 2013, a new version of a law in Brazil just took effect, mandating that smartphones give visibility to Brazilian-made apps, by either pre-loading phones with these homegrown apps or providing a dedicated marketplace on smartphones to display them.

This is a step forward for the Good Law—which has already helped Brazil a lot—but private business and government need to start doing more to truly help launch Brazil’s mobile potential.

What’s good about the “Good Law”

The explicit promotion of Brazilian-made apps on smartphones is the latest in a series of expansions to the “Good Law” (or Lei Do Bem), which previously gave tax breaks for technology innovations and has helped lower the price of smartphones in Brazil, where prices were the highest in the world.

This introduction of a public law coincided with a private phenomenon: the quick emergence of a strong middle class with more purchasing power than ever.

In turn, this perfect storm has spurred an unprecedented surge in Brazilian mobile growth. More than 50 percent of Brazilian are in the middle class, earning from $400 USD to $1,800 USD per month.

While the headlines show a burst of smartphone growth and a strong future for mobile in region, the reality is that in many ways, Brazil is still very much transitioning out of a feature phone-centric mobile ecosystem and has no clear identity quite yet. Nielsen reports that mobile ownership in Brazil is divided between 44 percent feature phones, 36 percent smartphones, and 21 percent multimedia phones with no operating system. 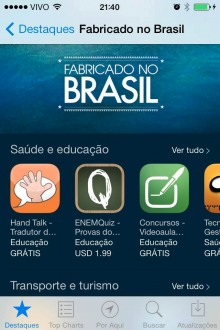 Public/private partnerships are important for promoting Brazil’s smartphone ecosystem and empowering the growing the number of smartphone users. With immediate access to homegrown apps on their new smartphones, people can find services that are directly relevant to their needs (like local food delivery and Wi-Fi access finders).

Since public and private sectors are working together to bring more people to the mobile Internet, there is tremendous opportunity for growth in Brazil. The country can potentially follow a similar pattern to what we’ve seen in the U.S. in recent years: accelerate smartphone penetration, increasing consumption of online video and social networking, and boosting mobile ad spending, e-commerce, and more.

One step forward, but many more to go

Hold on though, we’re not there yet.

The Good Law is a start – it got smartphones into people’s hands, and pre-loading Brazilian apps helps integrate the different mobile players. However, it does not nurture the whole ecosystem and neglect important issues that have to be addressed in order for Brazil to reach its full potential as a mobile leader.

The government needs to take a holistic approach to invigorating mobile technology in Brazil. For starters it should stop focusing solely on big corporations. It should:

Good apps are more likely to be developed by people who have been taught the basics at early ages, by good teachers. Excellent STEM teachers should be recruited, supported, and trained by new government policies.

This system can round out the education sector by helping the local startups that already exist learn more about available technology and what’s beyond their hometown.

Give young startups a global experience

The Brazilian government should bring in top talent to inspire, teach, and cultivate relationships with the energetic crop of young tech startups already in Brazil. In Silicon Valley, it’s amazing how accessible mentors are—but for Brazilian startups, it’s really difficult to gain insight from top-level experts who have the experience to solve well-known problems.

The government should also send Brazilian executives, engineers, and entrepreneurs to Silicon Valley, not just academic students. An example of something similar is the program “Ciência sem Fronteiras,” a positive government initiative working to promote science knowledge exchange.

Brazilian professionals need to take more notes from Silicon Valley than they currently are in order to bring real value back to their companies.

An example of a great startup incentive took place in Portugal, where tax reductions were offered to companies that hired unemployed workers or students. Portugal also offers tax reductions to startups that participate in the accelerator Portugal Ventures, including lower taxes if your startup succeeds in future investment rounds or makes an exit.

Another way to boost the startup ecosystem in Brazil is to give foreign entrepreneurs easier access to visas to stay in Brazil, which would allow them be in the country for meaningful amounts of time to study, research, create partnerships, and ultimately generate wealth.

An example is the Startup Visa in the U.S., an amendment to U.S. immigration law that has created a new visa category for entrepreneurs who have raised money from American investors.

The Private Sector: Investing in the Long Term

High growth companies need to take it upon themselves to make the Good Law more robust and help grow the ecosystem through investing in sustainable projects.

For instance, my company is working to give guaranteed promotion, visibility, and advertisement to Brazilian-made apps by branding the “Made In Brazil” app marketplace. This marketplace will help app developers to promote their apps to Mobile Carriers and OEMs. On the other hand, it will help the OEMs and carriers to find great Brazilian apps pre-loaded in compliance with Lei do Bem.

As many in the U.S. know, scaling in the beginning—especially with steep marketing costs—can be difficult and expensive. The idea behind the “Made in Brazil” marketplace is to help transition the market as device manufacturers work toward compliance, startups start to scale, and new mobile consumers are able to discover apps quickly and easily.

On a level of personal experience, I also believe that it’s important for more established mobile companies, like mine, to invest in promising local startups to help them grow in a changing mobile ecosystem.

The Good Law is a good start. It has helped cement the smartphone as a viable business platform, but the government and private companies need to come together and nurture all players involved in the ecosystem to really kick start Brazil’s smartphone future.

By investing in education, creating tax breaks for startups, and cutting the bureaucratic red tape, the government can help foster idea exchange and constructive dialogue between Silicon Valley and Brazil. Meanwhile, established private companies also have a responsibility: to use their industry clout and cash to help startups grow and innovate towards a mobile-savvy Brazil.