The killer team behind the Espresso editor, MacRabbit has just recently launched their latest app, , and it’s worth a double-take. Update: the app is now called Slicy.

Photoshop users know it can be a battle moving their work from the image editor into files that are ready for the Web. Everyone has their own workflow for this process, but, when you’re creating on a fully-fledged website, having to export a load of assets manually can be a drag.

This is where Slicy comes in. The little $20 app takes your layer groups and turns them into files that are ready for upload, saving designers tons of time in the process. More specifically, to use Slicy simply name your layer groups the same as the file you want to create for them (like logo.png, for example). Then, drop your final PSD into the app and your files will be extracted and saved. That’s all. 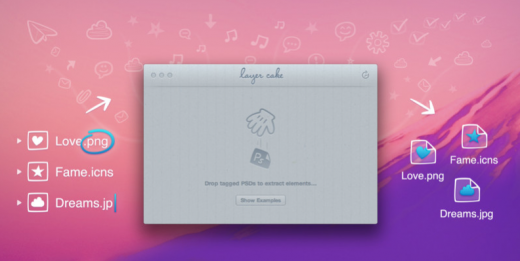 As MacRabbit touts on its home page, no longer will you have to repetitively “flatten, select, copy, make a new document, paste, save” or “hide others, measure, crop, save, undo.” Yes. It was about time new workflows were developed for this purpose.

Say hello to Layer Cake, a brand new MacRabbit product that will change the lives of designers and developers. This sweet app is an innovative new way to export PSD elements as images for the Web and Apps. Bye bye, Save for Web!

The team also noted in their announcement that they’ll soon be releasing Espresso 2.0.2 “with some very nice goodies as well,” which we’ll be keeping an eye out for!