At The Next Web we pride ourselves on not just being journalists or bloggers who report on technology from the sidelines. Instead we’re active entrepreneurs working on new services and technologies. That gives us a perspective on tech news that is different from many other technology blogs.

It also means that once every few months, we have something new to announce and it will be something that we are heavily involved in. Today we’re announcing a new service that we have been testing, below the radar, on this blog and are now ready to offer to other blogs. We call it Spread.us. 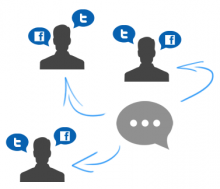 Spread.us is a very simple service that makes it easy for readers to ‘spread’ news across their social networks.

Lets say I’m a huge Apple fanboy. I could set-up a filter at Spread.us to automatically tweet all stories about Apple, but only when its breaking news, and with a maximum of 4 times a day. Now, when there’s breaking news, I’m the first one to tweet that.

That is what Spread.us does.

We started testing the service a few months ago, on this blog, with a little button. Within a few weeks users were sharing our posts across their networks and right now we get thousands of extra unique visitors every day from Tweets and shares which were spread through Spread.us.

So how about spam?
That is a question some people ask when they first learn about Spread.us: Isn’t it annoying for people on Twitter to see automated tweets? The answer is that it can be, so you should be careful with that, as a user. Just like it’s annoying for people to watch you tweet every little thing you experience every few minutes, it’s annoying to see a lot of automated tweets in your timeline. That is why we take extra care to help users set up their filters in a way that isn’t annoying for their followers.

On Twitter this is extra easy because we let people do a ‘native’ retweet. That means that we don’t copy and paste the content from a tweet into a new Tweet but instruct Twitter to show the original tweet, in the users timeline. This is a standard Twitter option (that I think you are already familiar with, but you never know). The good thing about that is that if I’m following Zee and Patrick, and they both retweet the same post, I will still only see it once. So even if 5 of the people I’m following retweet the same post, I still see it only once. 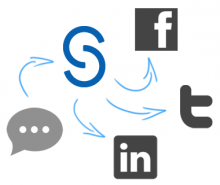 The future
Spread.us is still being developed actively and we add new features every week. We have a long list of extra features we want to add for both publishers and readers.

We think that Spread.us will be a great tool for publishers to connect to their readers and for readers to share news before anyone else does it. If you want to give it a try you can try it for this blog.

If you are a publisher we suggest you sign up, or contact us so we can predict how much extra traffic you can expect from signing up.

As always, feedback and questions are very welcome.