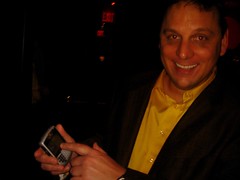 Growing is a lot better than launching.

In november 2006 I launched a company called Fleck. We worked on our product for months and ended up launching in New York at a Techcrunch party, with Michael Arrington pressing a button on my Blackberry which opened our service to the public, and an accompanying post on Techcrunch.

In the following 24 hours we received more than 17.000 uniques visitors, mainly from Techcrunch.

A few days ago I talked to a company that was about to launch. The founders have worked on their technology for over a year and told me they were ready to launch and make a big splash. Of course they were aiming high and were hoping to get a review from The Next Web, Techcrunch and Mashable. As a shareholder in the company (and this blog) I am eager to help them and make sure the company uses every opportunity it can to get more attention for its product and reach customers.

I guess I could help them get reviewed here on this blog.
I could even get them an introduction with Techcrunch and Mashable.
But I don’t think I will.

Since 2006 the market has changed. Getting a review on a big blog might not be the best way to get your company started after all. In fact, I wonder if it ever has been the right way to make a company successful.

Most internet companies that are succesful didn’t ‘launch’ this way, or did they? Google certainly didn’t, they just started, showed it to their friends, and grew from there. Foursquare launched during SXSW and that attracked some attention from bloggers. But Techcrunch didn’t blog about them until after SXSW. Gowalla didn’t officially launch either, although I believe we were one of the first to write about the company which triggered a number of other blogs to write about them too.

The ‘old’ path for internet start-ups used to be:

1: raise funding
2: build a service
3: do some testing with a closed beta and a few friends
4: launch big (still in beta) via the bigger blogs
5: sit back and watch traffic, users and and take-over bids stream in

The new path to success seems to be:

1: build a service
2: invite your friends
3: hope they like it and invite their friends
4: hope the big blogs notice the chatter and blog about you
5: sit back and watch traffic, paying user and offers for seed-funding stream in

It makes sense to build something and invite users right away. The days when we thought we could launch a finished product, and call it a beta, that would be good enough to get us to millions of users overnight are way behind us. The new and successful entrepreneurs build, iterate, make some money and repeat the process.