This article was published on November 27, 2014

The numbers don’t lie: mobile game Trivia Crack is now one of the most popular apps in the US, currently occupying the eighth rank of the App Store’s Top Free iPhone Apps section. Things are even more clear-cut in its own category, trivia apps, which it has been leading since October.

While Trivia Crack’s rise in the North American market has been more than impressive, it won’t be too surprising for anyone in Latin America, where the exact same trend started a few months ago. So what the story behind this boom?

Let’s face it, most viral gaming apps don’t exactly boost our knowledge of the world. Not so with Trivia Crack, which manages to keep us hooked while quizzing and educating us about a large range of topics, from sports and geography to history and entertainment.

Besides iOS, the app is also available (and very popular) on Google Play, Facebook, Amazon and Windows Phone store. Users can choose to play with friends or with random opponents, in the language of their choice (which is also a great way to practice foreign language skills). Here’s Trivia Crack’s video introduction:

From Latin America to the US

Since that video was made, Trivia Crack has reportedly reached 65 million total downloads and growing, with 50,000 downloads a day in the US. This US explosion mirrors what happened in Latin America,where it is better known under its Spanish name: ‘Preguntados’. Earlier this year, Preguntados became the top overall iPhone app in 19 countries, from Argentina and Brazil to Mexico and Colombia.

Despite this huge success, Trivia Crack was nowhere to be seen in North America’s top rankings only a few months ago. According to Maximo Cavazzani, CEO of its parent company, Etermax, the US Hispanic community may have been a bridge: “Our supposition is that Mexicans and others initially started playing with their relatives and friends in the US”, he told TNW.

One thing is for sure, Trivia Crack’s success now goes well beyond Latin American players. Still, it takes pride in being “a Latino game.” As a matter of fact, Trivia Crack was born in Argentina, where Etermax is based.

Just like Angry Birds wasn’t Rovio’s first game by far, Etermax developed several other apps before Trivia Crack. One of its predecessors was Aworded (‘Apalabrados’ in Spanish), a Scrabble-like game that has been particularly popular in Spain.

Etermax’s team now counts 80 members, all working from the same offices in Buenos Aires, and splitting themselves between back-end, front-end, design and management. “Despite our size, we compete as equals against Zynga and the like, and this makes us very proud. We are also extremely proud to have done it from Latin America,” Cavazzani says.

What’s very interesting about Etermax is how it managed to transition from being a development shop working for third parties to creating highly successful apps of its own. Part of it comes from its team’s ability to identify opportunities: “We wanted to created a trivia app because we knew it had always been a very popular category offline, and yet it hadn’t quite worked on mobile yet.”

When Trivia Crack was launched, it first became popular in Spain, a rebound effect of Aworded’s success. Its subsequent surge in Latin America lasted a few months at full speed, helping it reach mainstream and granting its founders almost rock star status in Argentina, where they got a tremendous amount of media coverage. The upwards trend then stabilized during the FIFA World Cup, only to be relayed by its US breakthrough.

Cavazzani will be a featured speaker in a few days at M2Games LATAM, a two-day conference that will take place in Miami, FL and focus the business of monetization, discovery and distribution of mobile games in Latin America. While he will be presenting a case study on Trivia Crack’s organic user acquisition, he is wary of giving detailed advice. “It doesn’t make sense [to go into specifics], because things change so fast. Look at iOS vs. Android for instance,” he explains.

When it comes to recommendations, he prefers to focus on sharing Etermax’s experience. “People know about our success, but they need to hear about the reality behind it, the long road that took us here,” he says. It’s not about waiting for a big break, but about constantly trying and learning. “Every small bit of knowledge about what people like and don’t like, what goes viral or not… we learn it and we incorporate it into our next app!”

Trivia Crack also shows that there is no marketing recipe or magic formula to follow: “We make the games we like. We used not to invest at all in advertising, and we’re still investing very little,” Cavazzani points out. In other words, Trivia Crack went viral was because it was loved by its creators and by its players alike, and its game design only served to boost this.

From online to offline

Cavazzini notes that Etermax paid lots of attention to Trivia Crack’s visual identity: “We learned to create attractive characters that could be used for merchandising and so on.”

This strategy clearly paid off: rather than an app, Trivia Crack is now a brand, both online and offline. The first piece of its licensing rollout is a board game that will hit the shelves in Argentina and its neighboring countries right on time for Christmas. In addition, Trivia Crack/Preguntados now has its own TV game, airing during a popular show on Argentine channel Telefe.

There’s no doubt that Etermax will keep on developing Trivia Crack’s offline products to capitalize on its exit. Unsurprisingly, it also plans to keep pushing online. To turn it into a truly global phenomenon, it would still have to crack China, perhaps with the help of a local partner.

“We will also launch our own chat service, dedicated to games,” Cavazzani says. When asked about Etermax’s next app, he reveals that it will soon launch a new app that will still be Q&A-related, but with specific themes, such as a TV series. “Users will be able to create their own channel within the app,” he explains. 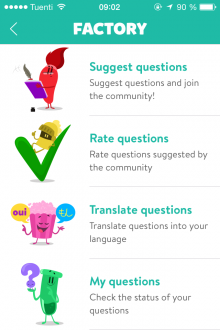 Focusing on specific verticals isn’t a first for Etermax, which previously launched dedicated soccer trivia apps for Real Madrid and FC Barcelona fans. While it may still develop similar standalone niche apps with other licensing partners, its next app will be all-in-one, integrating a range of themes that users will contribute to expanding.

This collaborative aspect isn’t new either: Trivia Crack relies on a “question factory” where users can share and rate submissions. “We receive 200,000 questions a day. Lots get discarded, but the best ones stay, and that’s how we manage to have content related to each country and to recent events,” Cavazzani notes.

This crowdsourcing could well be Trivia Crack’s secret sauce, hidden in plain sight. Etermax’s next app will bring this collaboration to the next level, and it will definitely be interesting to see whether it will warrant a similar success.