It was never likely to be a globally impacting phone, but the cancellation of the launch of Acer’s Aliyun-powered CloudMobile A800 has made headlines outside of China after Alibaba (the maker of the OS) claimed Google forced the spike by exerting pressure on handset maker Acer.

The launch was cancelled hours before the device was due to be unveiled to media on Thursday. Though Google did not confirm its conversation with Acer, Android chief Andy Rubin claimed that Aliyun is an incomplete version of Android and therefore releasing the phone would violate the agreement (not to work with fragmented Android builds) that Acer made when it joined the Open Handset Alliance, the official group of Android partners.

Alibaba argues the opposite, claiming Aliyun is Linux-based but simply able to access applications and content that is designed for Android. The device is officially ‘postponed’ but neither Acer nor Alibaba has confirmed how it will move forward following the weekend’s drama.

Google’s response to Aliyun, however, could have significant ramifications in China – where a number of Internet firms have been modifying Android with the aim of working with handset makers to develop affordable, locally customized smartphones. Those in the OHA may now be more cautious with Chinese partnerships following Acer’s troubles.

We’ve written a fair amount about UC, which is an Opera-like browser maker in China, and its aim to grow its share in India. The company already dominates its home market and it has been focused on extending its growth abroad, with India in particular a key market.

UC Web said it is aiming to reach 100 million users by 2015 in India and now it claims to have passed 20 percent market share in the country. Medianama has the details:

The company also claims that it now has 60 million users outside of China. UCWeb said that it has achieved a worldwide user base of over 300 million in a period of 8 years since its existence. It is also releasing a new international version of its browser.

Outside of India and China, the company is targeting the US. It has admitted that it will consider a Stateside IPO — despite the recent poor form of Chinese tech IPOs — in order to raise its visibility and grow market share outside of the Asian diaspora.

Baidu was previously linked to an investment in the company, but the search giant looks to be making its own way on mobile browsers, having relaunched its Android browser earlier this month. 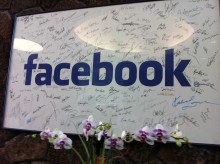 These days Facebook dominates almost every market worldwide but the social network added a new string to its bow last week after it hit 15 million active users in Japan, overtaking previously dominant rival Mixi in the process.

The figures were revealed by COO Sheryl Sandberg, who was visiting the country. Sandberg told the Nikkei that Facebook is keen to grow its share of Japan’s huge advertising market and take advantage of Japanese consumers’ advanced use of mobile Internet.

Mixi has 26 million registered members, higher than Facebook, but its 14.5 million active monthly userbase has been surpassed by the US firm.

Japan has traditionally been seen as a market that Facebook has struggled in, despite the success of Twitter, but the Menlo Park company’s presence is growing at speed and, to that end, it reached 10 million new active users as recently as March.

JP Morgan’s investment in Rocket Internet continued last week after the Germany-based incubator finally confirmed that the firm has put capital into Lazada, its Southeast Asia-based online retailer. The announcement followed recent speculation that JP Morgan was close to closing the deal.

Financial details of the investment, which is Rocket Internet’s first for a business in Southeast Asia, were not disclosed, but TNW understands it is worth “upwards of $50 million”.

That’s all for another week. You can keep up with all of our Last Week in Asia round-ups here or follow @TheNextWebAsia on Twitter for news as it happens.