Like many people, I’ve followed the One Laptop per Child initiative since I first read some thoughts from Nicholas Negroponte. 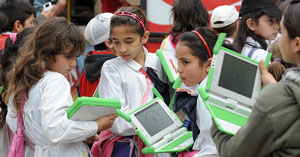 Now in Laptops for all, The Economist takes a look at the impact the program’s been having in Uruguay and described a somwhat checkered start. Today 380,000 children in Uruguay’s primary school system have one of the cheap, NGO-based XO laptops. Everyone’s great hope is that the overall standard of education will rise with computers as tools.

The computers are cheap by any standards. The laptop costs $260, with annual maintenance costs of $21. While it’s less than 5% of the education budget, there have been problems along the way. For example, the first 50,000 laptops were preloaded with English language software. The breakage rates seem rather high, perhaps because the children don’t really know how to handle laptops properly.

The biggest problem in Uruguay is simply connectivity. 40% of schools have none, and those that do can only support about half the computers on those connections.

The big test comes later this month when every 7-year old will take testing on a range of academic subjects. While technology won’t change children’s innate ability to learn, as the Economist article states, “The rest of the world should be intrigued: the first country in Latin America to provide free, compulsory schooling will become the first, globally, to find out whether furnishing a whole generation with laptops is a worthwhile investment.”