In the continuing downward slide of what was once a quintessential great American company, Eastman Kodak announced on Thursday that it must raise $500 million to cover debts or sell off its patent portfolio, potentially worth billions, to survive the next 12 months.

Kodak posted very poor earnings in its third quarter report, with operating losses of $222 million and income of $1.462 billion, a 17% decrease from Q3 2010. Much of these losses can be chalked up to a 25% decline in Kodak’s digital camera business.

The only major areas of growth for the company this quarter were Inkjet printers and ‘packaging solutions’. Film and photofinishing, of course, continued to plummet.

Kodak filed a statement with the SEC, stating that its “ability to continue its operations…is dependent upon the ability to monetize its digital imaging patent portfolio through a sale or licensing of the relevant patents.” Or, of course, obtaining the additional funding to feed its debts.

This slide for the company began years ago, when Kodak’s scientific labs, which are notoriously productive, created what is essentially the basis for every digital camera and video capture chip in use today, and yet the corporation somehow managed to miss the boat completely on the digital camera revolution. 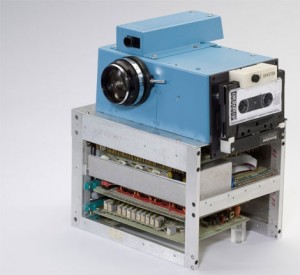 The tale of how and why it did so is too long to talk about here, but what it has led to is the fact that Kodak owns patents that are licensed in nearly every smartphone, video camera and digital camera on the planet, all while losing money hand over fist.

Kodak licenses much of its technology to companies already, and has fought legal battles with Apple and others for years.

Last year, it earned $830M in patent licensing alone, But that is small potatoes compared to what could happen if Kodak instituted a selloff of its patents.

With the potential to gain an advantage over their competitors, using Kodak’s patents as leverage, major manufacturers like Apple, Samsung, HTC, as well as software makers like Microsoft and Google would all be at the table with bells on.

Apple, Microsoft and a consortium of buyers recently spent billions on a boatload of Nortel patents and Google purchased Motorola, perhaps to build a hardware dynasty of its own, but also for its patents.

Money manager Ken Luskin says that the size of such a patent buy with Kodak could ‘blow your socks off,’ and Christopher Marlett of IP-specialized MDB Capital told an AP reporter that “There is an all-out nuclear war right now for global dominance in smartphones, tablets and mobile devices, and Kodak has one of the largest cache of weapons sitting there.”

This patent selloff might be the only avenue that the once-great Kodak has left, but it doesn’t guarantee success, as patent licensing is usually a one-time injection of cash. Out beyond that, Kodak will have to find a way to make itself successful again, after 119 years in business.