Kiip, the mobile rewards system is continuing to push business forward as it takes its first steps into Europe with the launch of its YO! Sushi rewards game for London.

In case you haven’t heard about the company that is growing at a phenomenal rate and puts its success down to ‘happiness‘, Kiip is a platform that developers can use in their games that gives users real-world rewards from well-known brands.

In this case, play a game and win a free dish at Yo! Sushi. Not a bad reward at all.

The inimitable founder and CEO Brian Wong said, “We were setting our sights on London specifically and a lot of people were asking us about it especially when I’m in Europe. We hired Eamonn Carey our EMEA director here already.” So the company has a firm foot in the door for further expansion.

This year has seen astonishing business growth for the company. Just last month Kiip launched its app for keeping track of the alerady-earned rewards. Also in July, the firm announced $11m series B round of funding.

Back in March, Kiip also opened up its platform and offered a $100k developer fund to encourage the creation of even more creative ways to unlock achievements to be rewarded.

Naturally, Wong is pleased the new association, “It’s our first global partner in London and we’re very excited about it,” he told TNW.

But there is no time to rest. The year may have been busy already but Wong is looking forward to progress in Q4. “It’s going to be very busy, especially before the holiday season,” he says. “The digital wallet we announced is not available in London now but it will be later this month.”

Wong’s hopes for European expansion are not dampened by the current state of the economy. “One thing that hasn’t slowed down in Europe is people buying phones. It is indicative of this in they UK is a Carphone Warehouse every two blocks,” he comments. 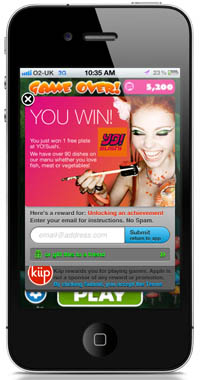 “Advertisers are seeing this mobile activity is too big to ignore so we’re showing them that the traditional banner ads are not the only solution as everyone is already aware they are a nuisance. We’ve seen a lot of adoption with bigger brands that we have also worked with in the States and it’s good to see this transfer here as well,” he explains.

So is the UK ready to adopt the social rewards experience? Wong believes that there’s something within all of us that likes the opportunity to achieve things for treats. “The whole concept of rewards for everyday life, in terms of taking existing behaviours – it’s something we do already,” he says. “If you want to reward yourself you’ll grab a cup of coffee or grab a snack, it’s a natural behaviour. With Kiip, until humans fundamentally change how they operate I think our model will continue to have some level of alignment with how we act.”

Success on home turf in the US has fuelled Kiip’s ability to take the leap internationally. Business back home for Wong appears to be going gangbusters, especially with uptake from enormous brands. “In the US we continue to see incredibly strong adoption across all the brands we have. Our latest addition is Kraft. With the Kiip app launch it’s a focal point for us to continue to bring in more experiences,” says Wong.

Wong also seems to have an endless font of future ideas. The Kiip principle appears to have a lot more room for growth across many areas of achievement and reward. “Gaming and fitness were the lowest hanging fruits for the first stage of our growth but there are so many situations where this can apply,” says Wong. “If you think about a utility like completing a to-do list, it’s something many people do every day. It could be very special to a lot of brands as well.”

With so many ideas, new expansion and funding in his pocket, it looks as though Brian Wong is reaping a few rewards of his own with Kiip.