A district court judge for Bexar County has granted a temporary restraining order (TRO) to ensure that Andrea Hernandez, a San Antonio high school student from John Jay High School’s Science and Engineering Academy, can continue her studies pending an upcoming trial. The Northside Independent School District (NISD) in Texas recently informed the sophomore student that she would be suspended for refusing to wear a “Smart” Student ID card embedded with a Radio Frequency Identification (RFID) tracking chip.

In short, this is good news for Hernandez, who has been fighting her school for months. Let’s back up a little, however, to get the full story here.

First off, the school district in question started issuing the badges with embedded RFID chips at the start of this school year in September, as part of its $500,000 Student Locator project. School officials want to eventually expand the program to the district’s 112 schools with a projected student population of 100,000, in the hopes of receiving up to $1.7 million from the state government. 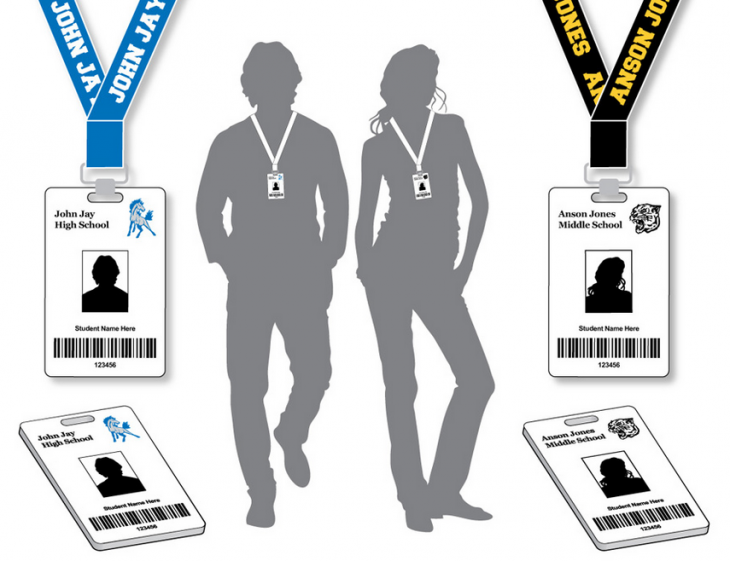 The badge, worn via a lanyard around the neck, identifies a student in three ways: it features their photo and name, a bar code associated with each student’s Social Security number, and the chip to monitor his or her movements on campus from the second they get there to the second they head home. The ID card is required to use the library or cafeteria, vote in school elections, attend certain school functions, purchase tickets to extracurricular activities, and Hernandez claims, in some cases to go to the bathroom.

Hernandez refused the new policy of wearing the badges at all times and, with the support of her family, began protesting on the grounds it violates her religious beliefs and infringes on her privacy. Yet the school stopped her from passing out flyers to other students regarding the locator project.

The school offered a special lanyard with the RFID tag removed, in the hopes to put a damper on the whole situation. The student’s father refused the deal, however, because it came with strings attached.

“He told me in a meeting that if my daughter would proudly wear her student ID card around her neck so everyone could see, he would be able to quietly remove her chip from her student ID card,” Steve Hernandez told WND. “He went on to say as part of the accommodation my daughter and I would have to agree to stop criticizing the program and publicly support … it. I told him that was unacceptable because it would imply an endorsement of the district’s policy and my daughter and I should not have to give up our constitutional rights to speak out against a program that we feel is wrong.”

After months of school board meetings, organized protests, and even filing formal grievances with the district over the matter, the family received the following letter on November 13: 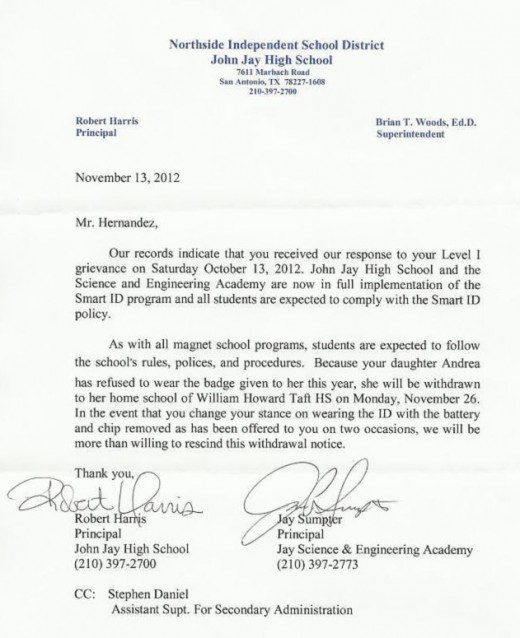 Hernandez was essentially told she would be suspended from her school on November 26, unless she wore the badge around her neck, which she has been refusing to do. This coming Monday, she would have had to attend William Howard Taft HS, another high school in the same district that does not (yet) employ the badges with the RFID chips.

The Hernandez family decided to take action against the school with the help of the Rutherford Institute, a civil liberties and human rights group which immediately took the view that the school district is looking for more public funding, which it can only receive if there is proof of positive student attendance rates. Rutherford attorneys filed a petition for the aforementioned TRO, as well as immediate injunctive and declaratory relief alleging that the school’s actions violate Hernandez’s rights under Texas’ Religious Freedom Act, the First Amendment, and the Fourteenth Amendment.

“The court’s willingness to grant a temporary restraining order is a good first step, but there is still a long way to go—not just in this case, but dealing with the mindset, in general, that everyone needs to be monitored and controlled,” John W. Whitehead, president of The Rutherford Institute, said in a statement. While the TRO has been granted, a hearing on the preliminary injunction will take place next week.

“Regimes in the past have always started with the schools, where they develop a compliant citizenry,” Whitehead continued. “These ‘Student Locator’ programs are ultimately aimed at getting students used to living in a total surveillance state where there will be no privacy, and wherever you go and whatever you text or email will be watched by the government.”