I’ve reviewed two of JBL’s hi-fi speakers before, the L82 and L100 Classic — speakers I enjoyed for their great sound and retro aesthetics. Over the past month or two, I’ve been able to test one of the company’s more forward-looking speakers, the $1,800 HDI-1600. After putting it through its paces in my living room and the test bench, it’s clear the HDI deserves its spot in the crowded $2,000 price bracket.

The HDI-1600 is a bookshelf speaker with a 6.5-inch woofer for the lows and a 1-inch compression driver rather than your typical dome tweeter handling the highs. A compression driver is theoretically able to play louder than a standard tweeter with less distortion, but it requires a carefully designed waveguide or horn to shape the sound. So That fancy-looking trim around the compression driver is not just a design flourish — it makes critical contributions to the speaker’s tonality and soundstage.

Speaking of design, the HDI-1600 isn’t really my cup of tea, what with its ‘squircle’ shape and plastic trims. Aesthetics are obviously personal, but I’d at least like to see some more variety in choices for different homes. A light wood or white finish, for instance, would go a long way to making the speakers be a better fit for my apartment. The typical walnut veneer looks ‘old’ in my book and glossy black is overused and drab. The grey oak color stands out at least, but I feel like it requires a very particular aesthetic to work in.

Overall, the design doesn’t really seem all that worthy of the price tag, nor do the looks stand out for the retro-ness as with the L82 and L100. I do at least like that deep waveguide though. And aesthetic opposition aside, the speaker is hefty and does feel solidly made.

Of course, one buys expensive speakers primarily for their sound, and the HDI-1600 delivers in spades. Out of the box, the prevailing impression is one of neutrality — almost everything just sounds ‘right.’ To me, that is what defines a great speaker: not ‘exuberant’ highs, a ‘luscious’ midrange, ‘fast’ bass, or whatever poetic superlatives we audiophiles love to pin on speakers.

A truly great speaker just lets the recording shine without getting in the way, and the HDI-1600 mostly does just that. In the case of the HDI-1600, there were just two deviations from neutral that stood out to me.

The bass response was slightly boosted, so if you’re not using room correction, you might want to be careful about positioning these near walls, which will further reinforce the bass. But in general, I actually find this is generally a good thing with bookshelf speakers — it helps ‘fill out’ the bottom end, as few bookshelf speakers extend all the way into the sub-bass. The boost also helps the HDI-1600 reach down to 40Hz (-6dB) anechoically, and in my experience, the speaker still has audible energy into the 30s in my room.

This is actually among the best bass performance I’ve seen from a passive bookshelf speaker, and though I always recommend adding a subwoofer to the speaker setup if possible, the HDI-1600 fares better than most without one.

The other, smaller detail that stood out to me was that the speaker seemed to lack a little bit of sparkle or ‘shimmer’ in its top octave. This will probably only be noticeable if you are a younger listener and can still hear well above 10kHz, but it was noticeable to me as I switched between the HDI-1600 and the Focal Chora 806 that is my usual reference.

Tonality aside, the HDI-1600 has standout soundstage and imaging performance. It is particularly good at maintaining a stable ‘phantom center,’ that sweet illusion of having a singer or instrument float between the two speakers. The soundstage is not particularly wide, but width and ‘sharpness’ are often a tradeoff. I personally tend to lean towards something a bit wider, as is found in the L82, but the instrument separation and overall sense of realism on the HDI-1600 is excellent.

Lastly, the HDI-1600 perhaps differentiated itself most from competing speakers with its dynamics. Truth be told, I’m probably not even the ideal buyer for this speaker — it really shines at loud volumes when other bookshelf speakers start to struggle, and I very rarely listen all that loud.

It sounds just as good at reasonable SPLs, but the few times I decided to hazard annoying my neighbors, the speakers didn’t seem anywhere near straining — a likely benefit of the compression driver.

Although I normally listen to speakers before putting it on the test bench, it’s worth noting that in the case of the HDI-1600, I had already seen some measurements for the speakers, so it’s possible my impressions were colored by those. Nonetheless, my listening impressions are backed up by my own measured data.

Below, you’ll see a kind of graph called a ‘spinorama,’ so-named because creating it involves rotating a speaker to capture its sound at 70 angles. This is important because what we hear in a speaker is not just the direct sound, but also the sound that bounces off our walls. Exceptional speakers will have a flattish direct sound, which changes smoothly as its performance is captured further off-axis.

The Spinorama summarizes a speaker’s on-axis and off-axis sound in one graph, helping us separate the good speakers from the bad ones. The HDI-1600 is a good one:

Explanations of how to interpret these lines are provided over at Speaker Data 2034 and Audioholics. Here’s my summary, which you can skip if you’ve already read this spiel:

The HDI-1600 demonstrates excellent performance throughout.

The on-axis and listening window curves trend towards flat, hinting at the neutral tonality I heard. Likewise, you can see the slightly elevated bass around 100Hz and a dip in the response between 9 kHz and 15 kHz, likely the cause for the slight lack of ‘sparkle’ I described. There is a slight scoop in the upper bass and lower mids, but I can’t say I noticed it in my room. Your mileage may vary.

Likewise, the predicted in-room response tilts down while maintaining a similar overall shape as the direct sound, suggesting that tonality is maintained listening in a typical living room setup, and while the ERDI curve gets a little jagged around 1-3kHz, the Horizontal ERDI remains smooth, predicting the impressive soundstage performance I mentioned earlier.

The spinorama tells us most of what we need to know, but I like to look more deeply at the horizontal performance. Here is the response from 0 to 90 degrees:

This is mostly excellent performance; we can see how the response shape mostly changes smoothly with each 10-degree increment. 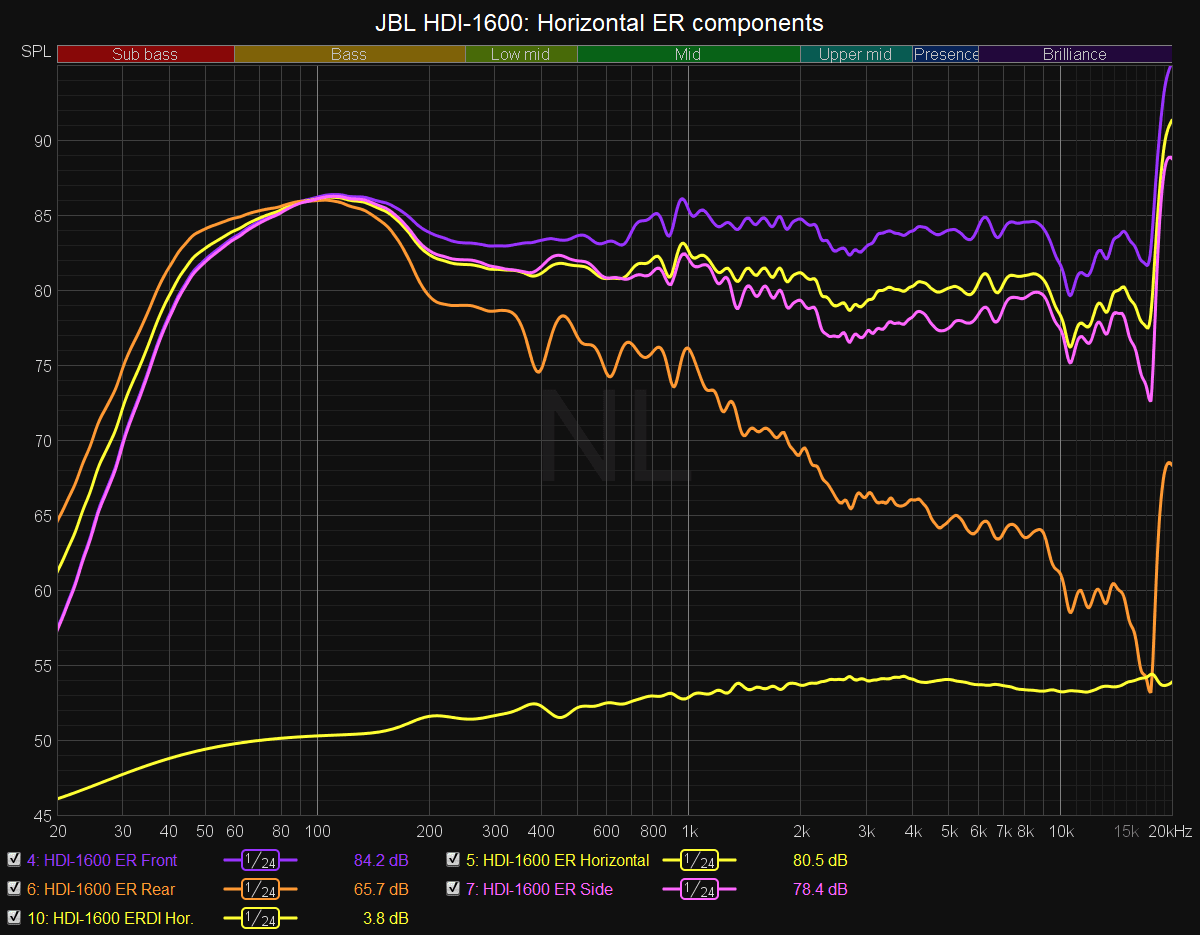 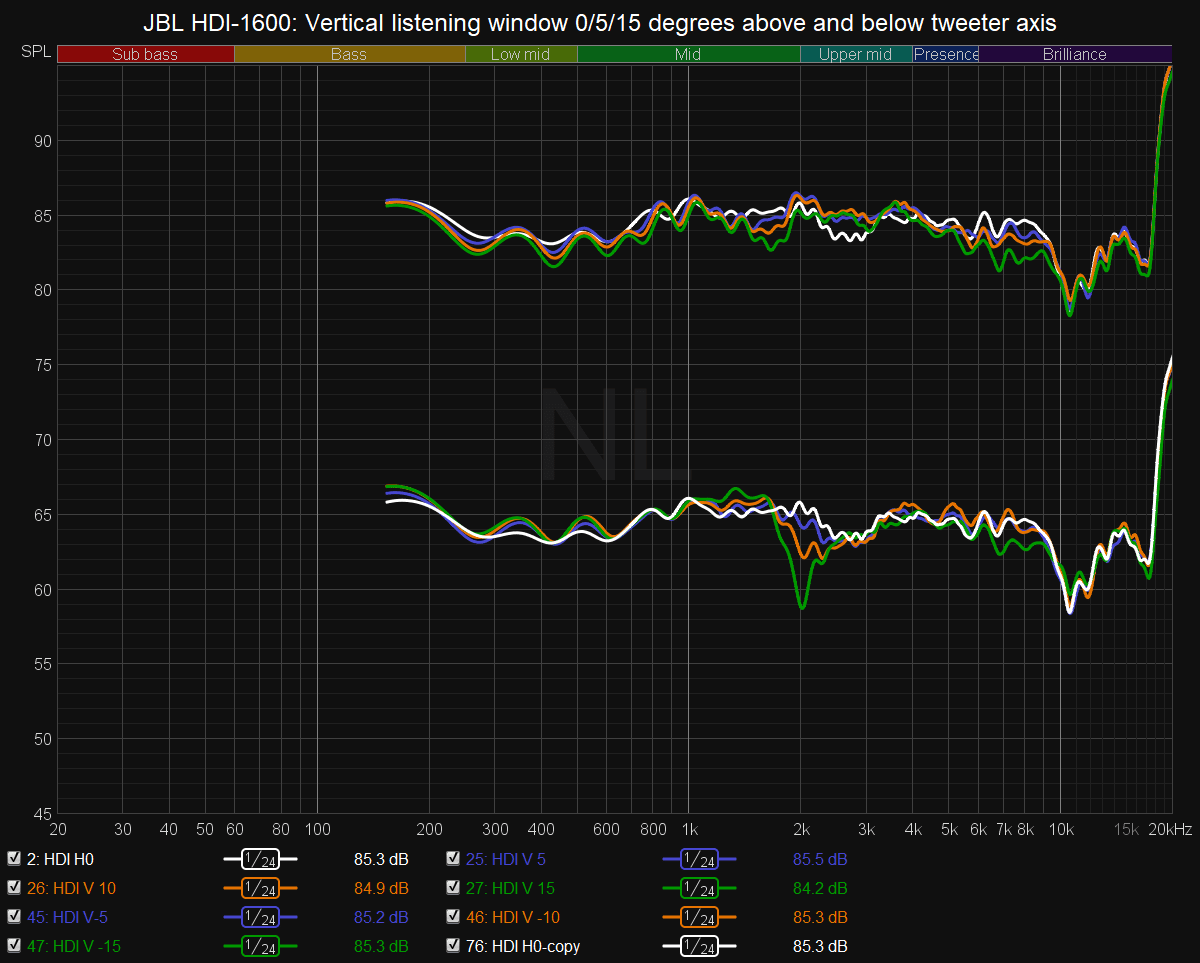 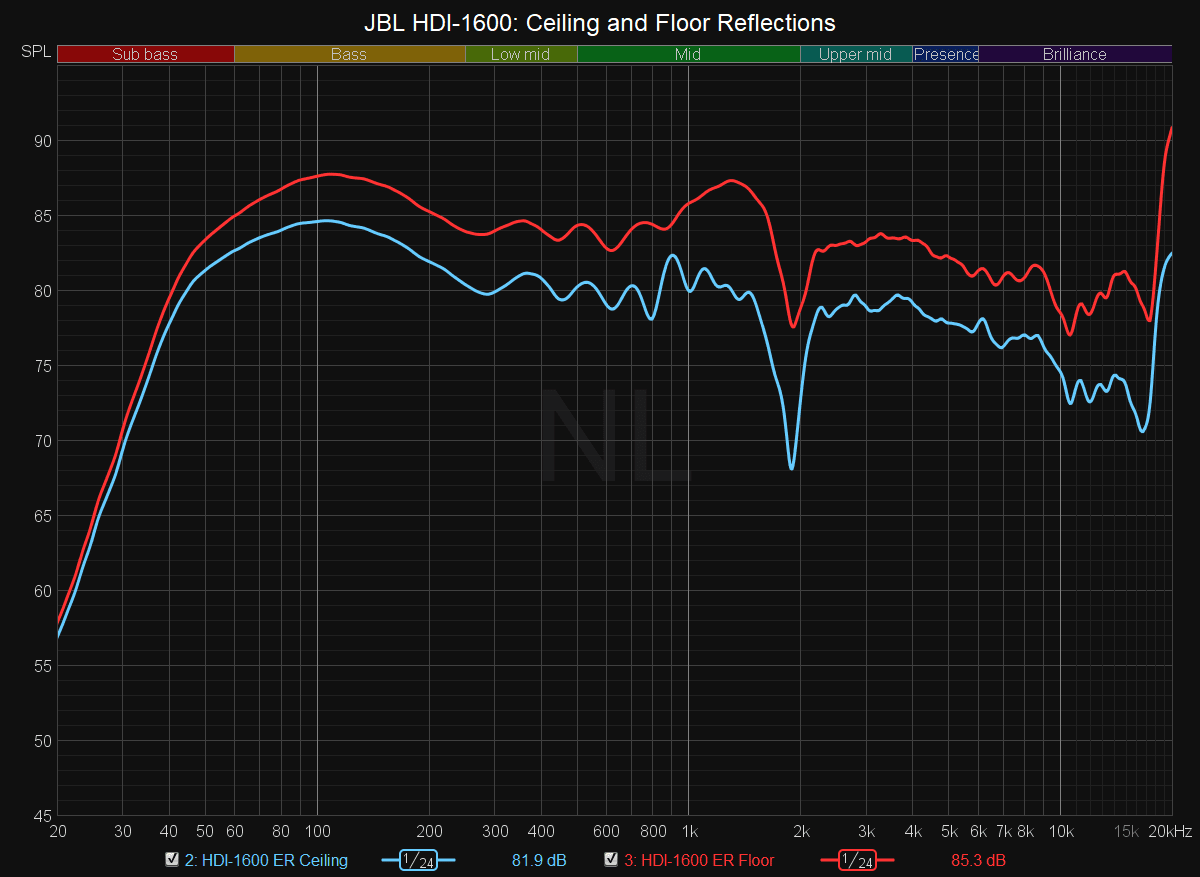 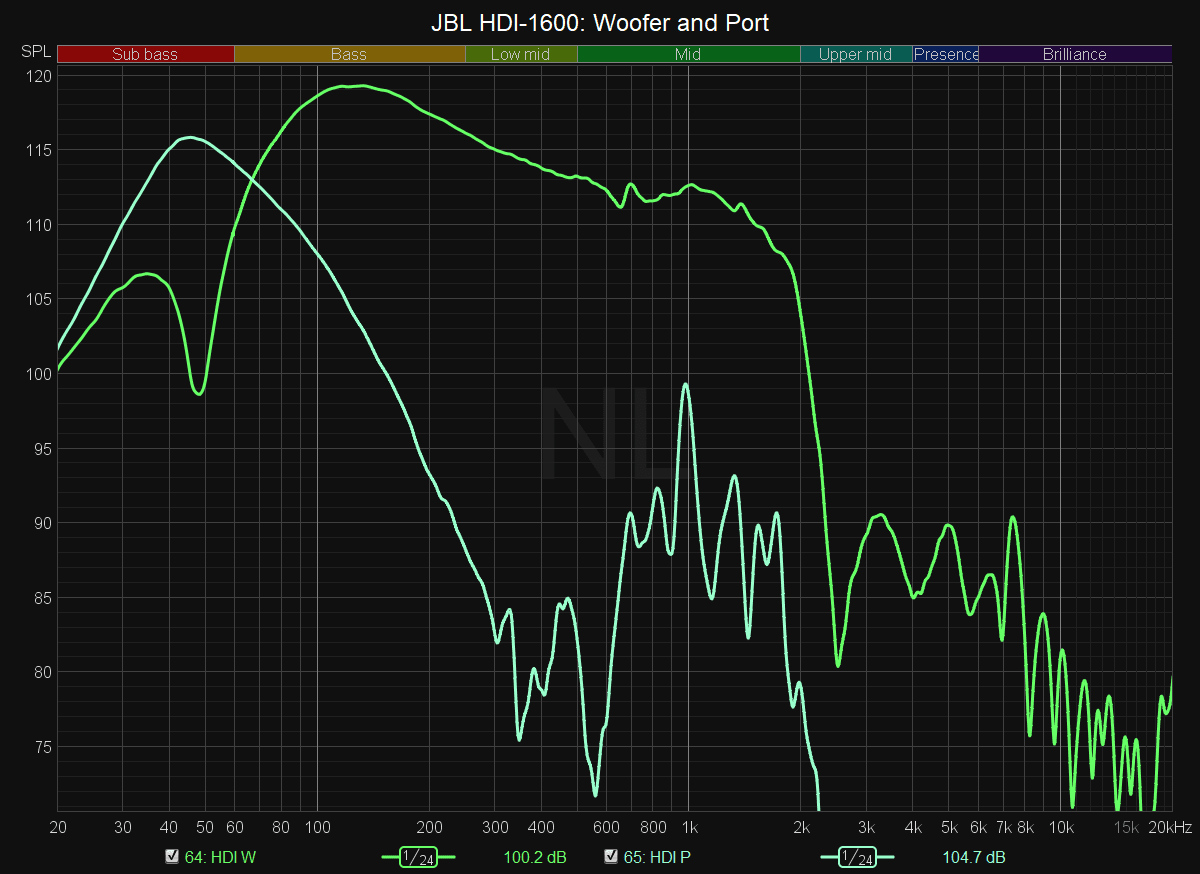 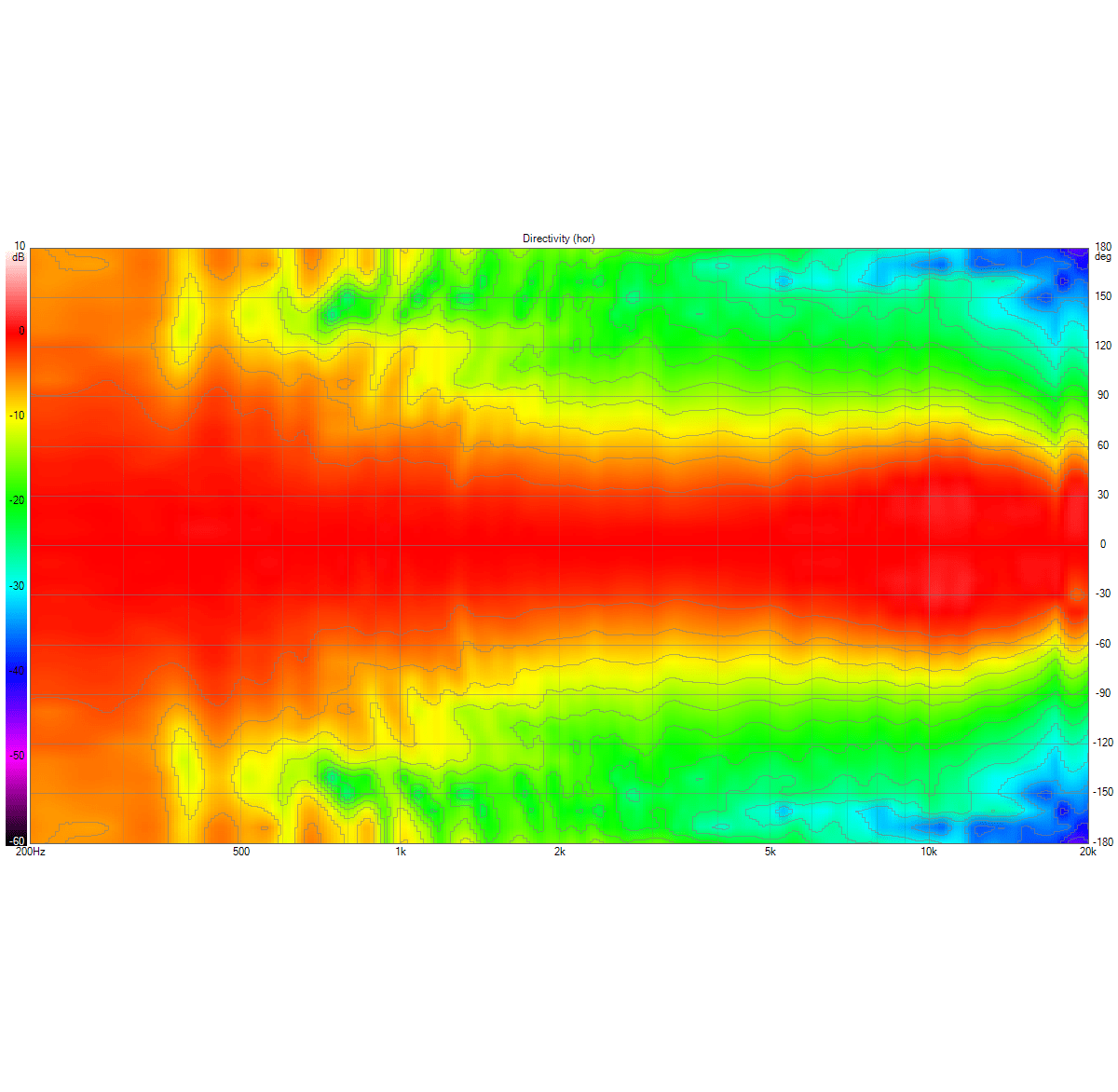 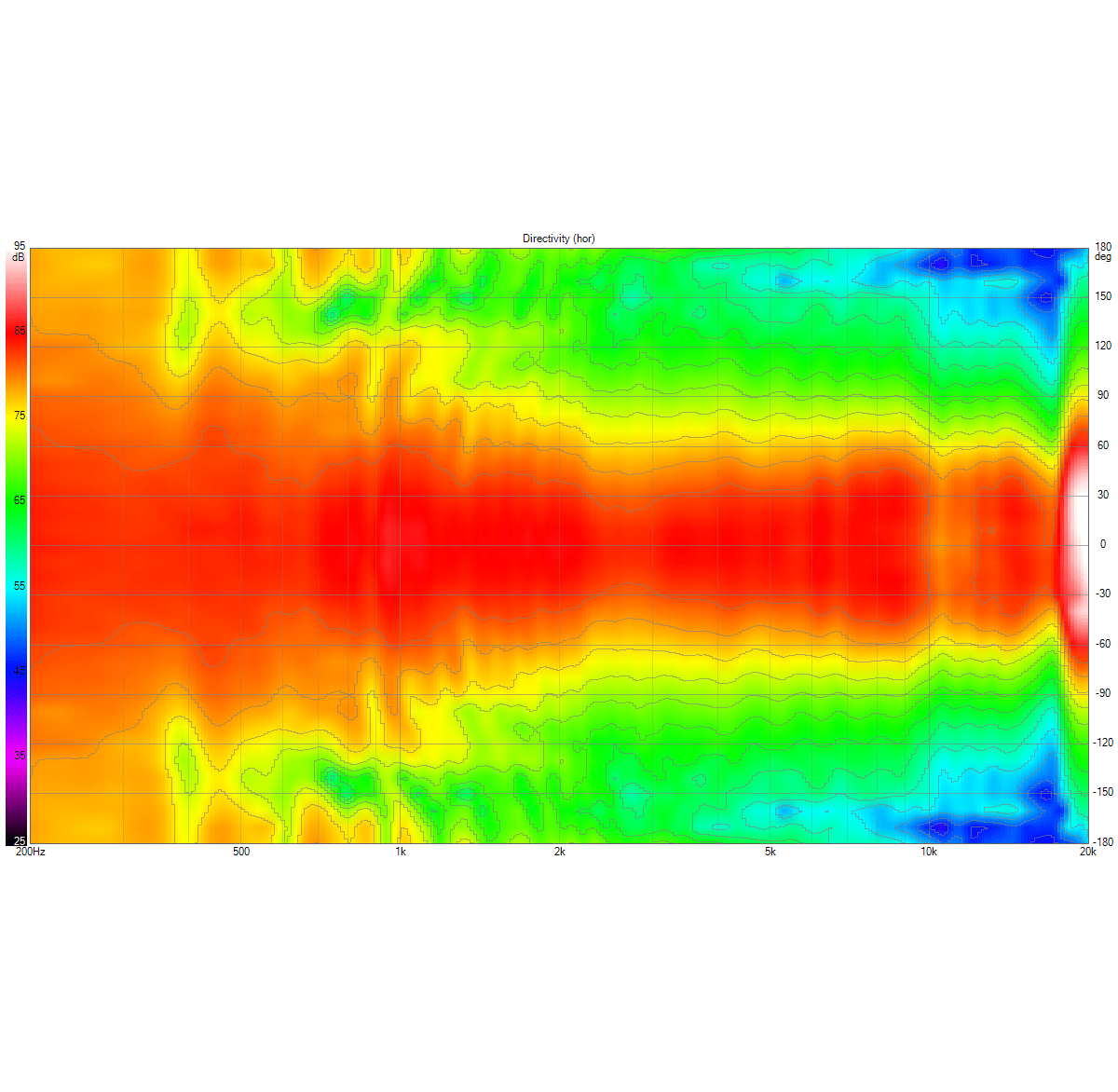 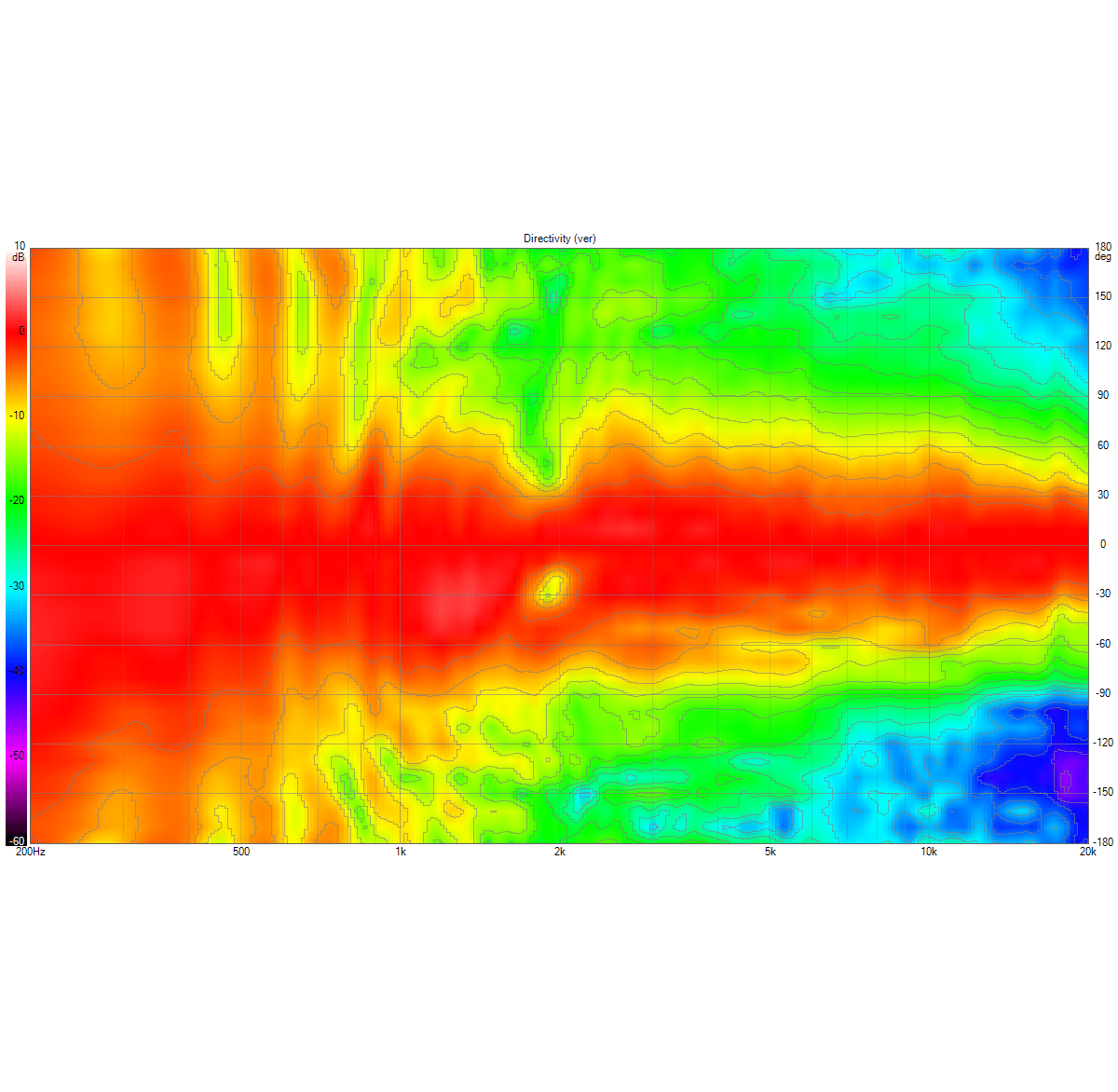 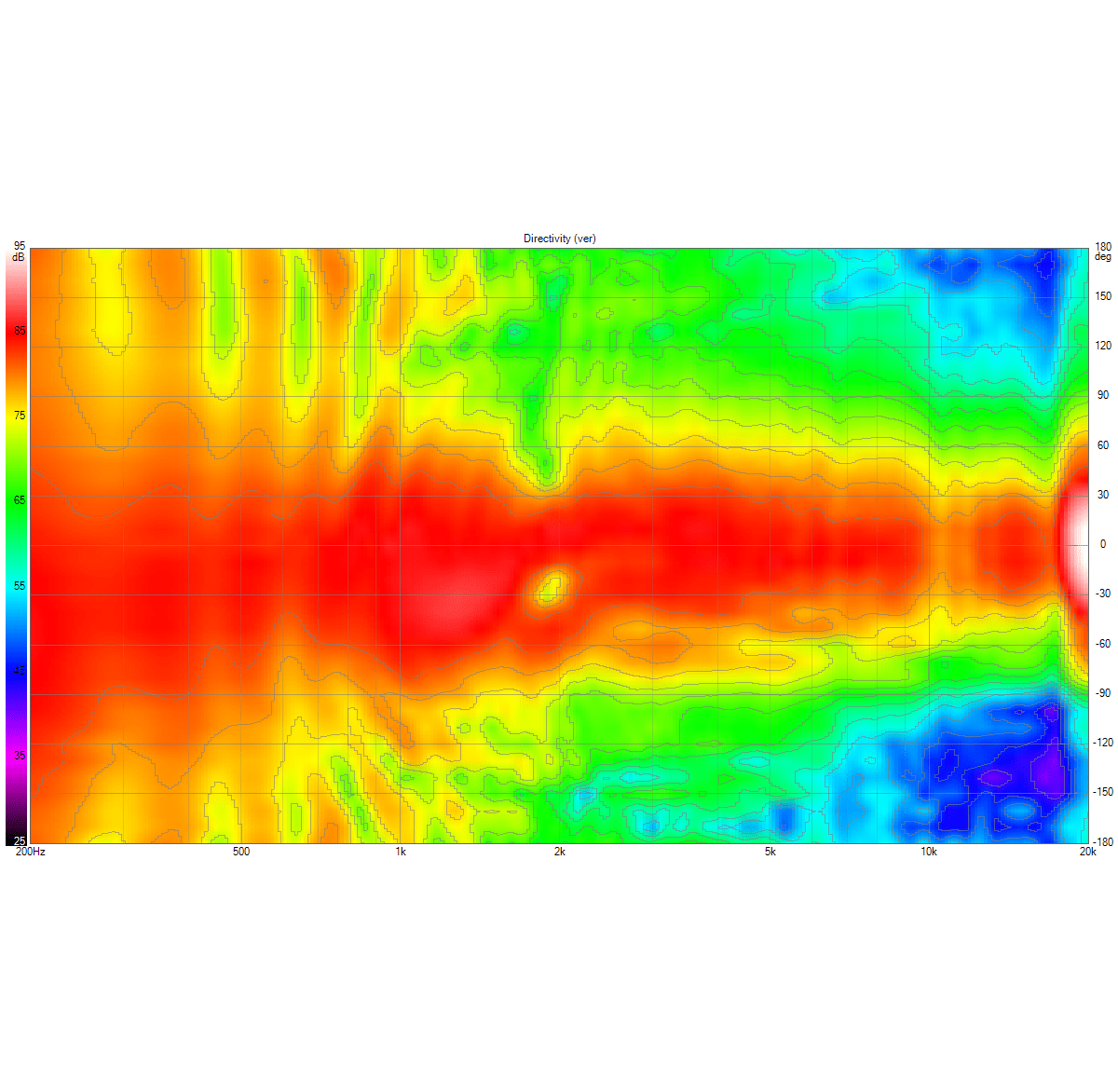 JBL does it again

The HDI-1600 performed admirably in both listening and measured tests. At $1,800, its greatest problem is that audiophiles are already spoiled for choice in the $1000-2000 price bracket with such great options as the KEF R3 and LS50 Meta, Buchardt S400, Polk L200, and Focal Chora 806 offering worthy challenges.

But I’m not complaining — it’s a pretty great time to be an audio enthusiast. Though the aesthetics aren’t right for me, HDI-1600 stands out for its soundstage prowess, deep bass extension, and fantastic dynamics, and should be a particularly compelling option if you like to listen loud. If those are qualities you’re looking for in a speaker, the HDI-1600 should be near the top of your list. 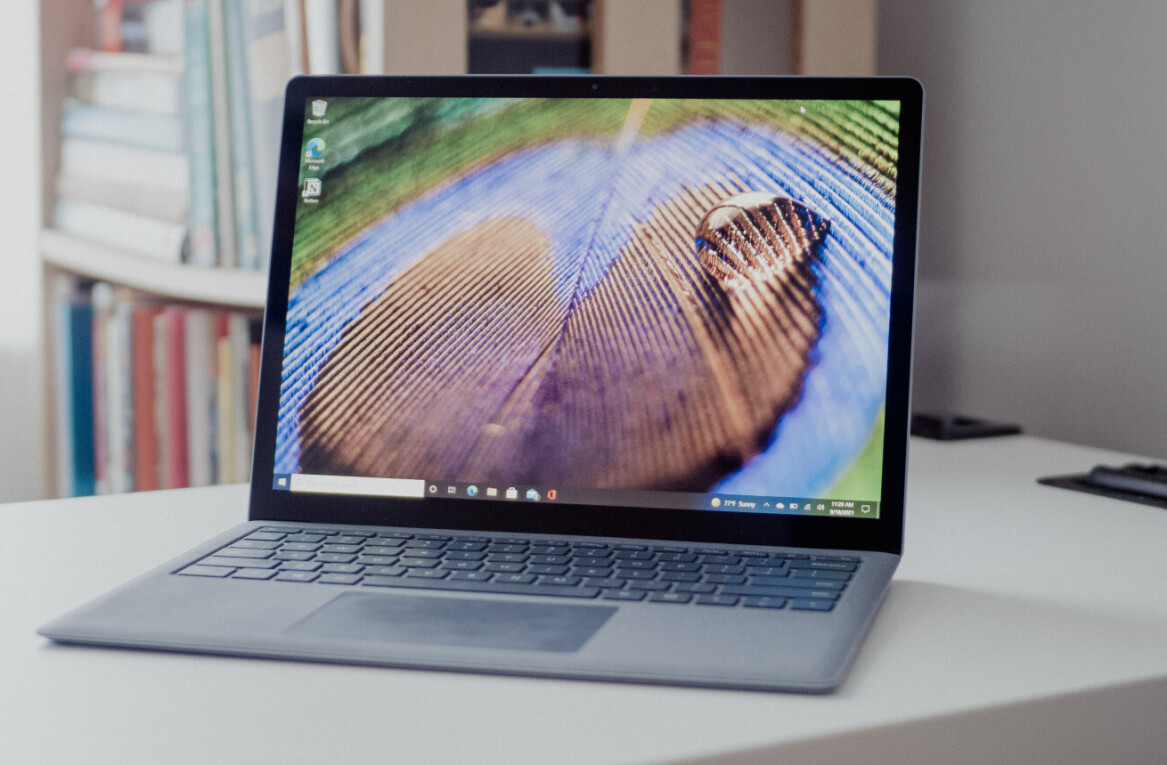