Japan’s leading operator DoCoMo has announced a series of cloud based services that will soon launch under its new ‘docomo cloud’ initiative, that seeks to tap into the country’s growing smartphone market.

DoCoMo has been working on language translation technology for some time and, on June 1, it will introduce a Mail-Hon’yaku-Concier service that helps non-Japanese readers. The application will translate SMS, email and social network messages between Japanese and English, Chinese and Korea using cloud-based technology, the company says.

Focusing on storage, the carrier is preparing an iCloud-type ‘Photo Collection’ service that will allow users stash to up to 5 GB of content in the cloud. As is standard, stored multimedia will be accessible from a range of devices, PCs and Macs.

DoCoMo says that Photo Collection will include facial recognition technology, to help tag and label photos, while the service will integrate with popular third-party services, including Evernote.

The final update, which will come in August, will bring multiple device download options to the carrier’s dmarket content store. The change will mean any items purchased from the video, music, book or anime stores can be download to more than one device registered to each user, without cost. 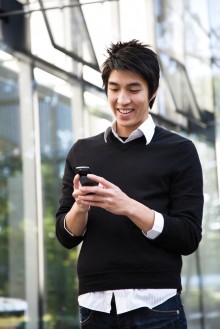 The company will also sharpen its Siri-like service Shabette Concier to provide better answers on a range of topics. The DoCoMo service beat Apple to supporting Japanese and the carrier says it has been download 2 million times in its initial 10 weeks.

Right now, however, there is no plan to put Shabette into English and it will remain open to Japanese instructions only.

Japan’s smartphone market is surging and recent growth of 28 percent percent in the last quarter, means that one in four mobile device is now a smartphone, according to a comScore report.

DoCoMo is hugely influential in Japan, where its 60 million subscribers give it more than 50 percent maker share. The services are likely to be a boost to DoCoMo’s LTE service — which passed 2 million subscribers in March — with 4G users enjoying faster speeds and more efficieint services.

Update: The operator has also unveiled a series of new devices, but still it has no agreement to offer the iPhone. From the press release on its website:

NTT DOCOMO, INC. announced today its 2012 summer lineup of 19 models for launch in or after June, including 16 smartphones, a tablet and a mobile phone for children as well as a mobile Wi-Fi® router, many of which will be compatible with DOCOMO’s Xi™ (read “Crossy”) LTE mobile service.