iZettle, generally known as Europe’s answer to Square, is finally being launched in the UK. The payment system that hooks up a chip and sign device to mobile items is being pushed as a saviour for British small businesses.

The mini chip and sign devices are being brought to the UK through an exclusive launch with Everything Everywhere – now known as EE. It can be purchased from 297 EE stores across the country and from EE’s telesales channel. The device can be used with iPhones, iPads and a selection of Android devices that are 2.1 and higher.

The readers cost £20 in EE stores, but vendors will get a £20 voucher that can be used towards iZettle transaction fees. Currently merchants will be charged 2.75% for each payment they take.

To get a service like this up and running, most credit cards need to be accepted. The cards that will work with the device for now are Visa, Mastercard, American Express and Diners Club. Although iZettle is so often compared with Square as a payment service, it’s worth noting that Square works with a card’s mag strip and iZettle works with the chip and pin which are much more common in Europe.

As noted by TNW reader @Le3ky, those who sign up for a private account to use iZettle also need to have a Facebook account. (Businesses require a credit check instead). On this iZettle says, “Anyone who’s over 18 can register. As a private person you need to be registered as a citizen in the country and a Facebook account. As a business you have to pass a credit check.’

iZettle says that the reason behind the requirement for a Facebook account is down to security, it’s a one of a number of requirements that help to set up the account, “Getting to know our customers is key in keeping the service safe and secure. A Facebook account with a number of friends, in addition to a bank account, home address and a phone number, gives a good indication that a person really is who he or she claims to be.”

Though FB might not be everyone’s social network of choice, it is fairly ubiquitous and with the details available on the average profile,  the reasoning does make sense to a certain extent.

Once a merchant has an iZettle device, they can download an app for iOS or Android and apparently sign up to the service within three to five minutes. At the launch event at London’s Southbank Centre the speed of sign-up, lack of set up fees and no minimum spend policy were all geared toward sole traders and small businesses.

The current limits for payment are £5,500 per day per business and should you be approached by a big spender, the upper limited per individual transaction is £2,500. Given most small to medium businesses are taking much lower payments and indeed more often prefer cash, a device like this should work for the irregular appearance of a credit or debit card.

As an example to make its point at the UK launch on Tuesday, iZettle’s CEO Jacob de Geer quoted a survey stating that the UK’s plumbers, builders and electricians are currently owed around £283 million by late or non-paying customers.

The beta test for the service has been run over the past six months with 4,000 users. In the run up to the UK launch, Visa Europe cut off support for iZettle leaving many merchants across the continent stranded. At the time, Visa said that the issue was a failure to meet its device acceptance requirements. However, it seems those issues have been cleared up and de Geer stated at the iZettle press launch that Visa Europe’s cards will be working with the device. 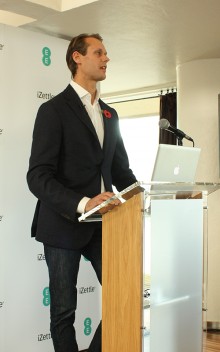 iZettle’s CEO also defended the lack of support for Windows Phone and Blackberry. Although both may claim a sector of the market it is not as large as Android and iOS.  De Geer said that through the company’s research it was noted that iPhone owners use their devices in different ways and are more likely to download new apps or try more in the way of mobile banking.

To show how the system works, a number of vendor market stalls was set up at Royal Festival Hall. Prepaid cards were handed out and the fun began as the WiFi and 3G signals fell over. (What would you expect with a room full of tech writers?) The systems worked better over 3G, which mean that the WiFi only iPad was out of the game pretty early on. Something to consider if you’re a vendor looking to adopt the service.

De Geer also said that the system of signature and chip card made users feel more secure. Admittedly inputting your PIN to someone else’s mobile device is not appealing but on the other side of the issue, most of the journalists at the event admitted to not using their regular signature to make purchases.

Given customers will be expected to sign for goods along with the presence of their card, you have to wonder if signatures will change in the absence of a stylus. You may have signed for parcels in the past and left marks on the proffered electronic pad that look like the scratchings of a drunken toddler. If services like iZettle take hold, expect your signature to change. According to Marion King, President of the UK and Ireland division of Mastercard, your scribbly signature on an iPad holds just as much legal status as a pen on paper.

By launching with EE in the UK, iZettle does have access to a pretty big network at launch. That said, the devices will work if they are transferred. For EE, this means that there is now a number of payment methods associated with the brand.

You may be wondering what this means for NFC and Quicktap as payment methods and you’d be right if you think this means the whole market is fragmented. It will take time until a de facto leader is identified. But as King pointed out, for now all methods need to be offered to customers so that they can pay in the way they feel most comfortable.

This doesn’t quite match up for small and medium businesses which may balk at the cost of a chip and pin reader, but it does mean as the festive season gears up with the arrival of Christmas markets and other events, solo retailers will have an opportunity to catch up on revenues by offering at least method of card processing.