The iPhone 4S is now officially available in Brazil and Chile, where it started selling at midnight today with a series of special events.

We had reported that Apple would sell unlocked iPhones 4S in its Brazilian online store, and the company just unveiled its sky-high pricing for the iPhone 4S:

Besides its latest smartphone, Apple is still selling the iPhone 3GS, for which demand remains high, as well as its recent iPhone 4 8GB.

There is one thing all these devices have in common: their prices are more than twice higher in Brazil than in the US. Here’s a quick comparison: 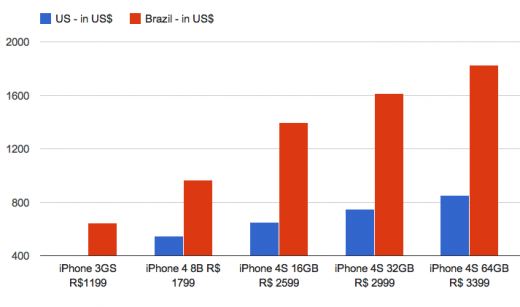 Sure, unlocked devices only represent a small portion of the market, since most customers need a data plan. Still, Apple seems to be gearing up for high demand in the country – you may have noticed its warning that “each customer will only be allowed to acquire two devices”.

As you can imagine, these prices are obviously generating criticism and sarcastic comments on social networks, with some people left wondering whether they should buy a car or an iPhone. This inspired the local Internet UOL a slideshow on what Brazilians could buy for the price of an iPhone, from a home theater to a gigantic fridge or 7 bikes. 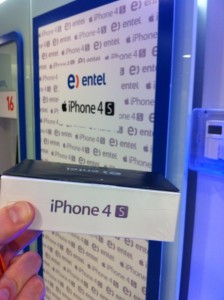 While Apple doesn’t have an online store for Chile, local customers are now able to acquire the iPhone 4S from local mobile operators, for prices which depend a lot on their monthly plans. According to the blog Oh My Geek, although the device may cost up to 409,990 Chilean pesos (US$790) with a cheap monthly plan, subscribers who opt for the market’s priciest data plans, such as Entel’s ‘Todo Destino 800’, may even get their iPhone 4S for free.

In other words, pricing is much more reasonable in Chile than in Brazil. As we had reported before the launch, Brazilian mobile operators are selling the smartphone for prices which aren’t much lower than Apple’s. For example, Vivo was one of the latest carriers to announce its pricing, and revealed today it would be offering the iPhone 4S from U$672 (R$ 1,249 ) to top-tier data plan subscribers. As for pre-paid plans, Vivo’s prices can go up to US$1425 (R$2,650) for a 64GB device. 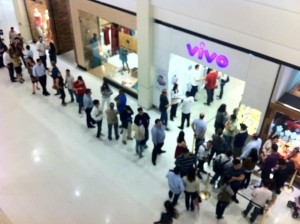 Besides its sky-high price, the iPhone 4S can’t count on Siri’s appeal to lure Brazilian customers, since the personal assistant doesn’t understand Brazilian Portuguese yet (it doesn’t speak Spanish either, but Apple announced the language will be added to Siri in 2012).

This explains that queues in Brazilian malls were relatively limited during tonight’s launch, if this picture tweeted by Vivo is to be believed – which also reminds us of the lukewarm welcome the device received in India.

As a matter of fact, Brazilian customers may well have a very good reason to postpone purchasing an iPhone. At the moment, a large portion of the device’s price is due to taxes which apply to imported electronics – summarized in a infographic created by iG Economia: 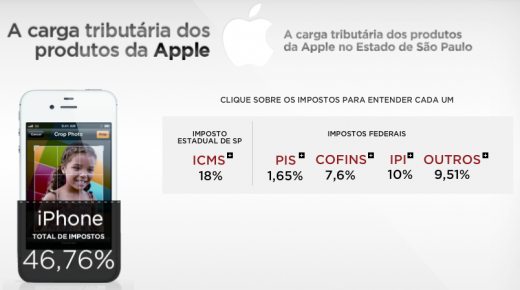 In this context, Brazilian clients may be better off waiting for iPhones made in Brazil to hit the shelves. As we reported, the local newspaper O Globo believes that Foxconn has started manufacturing iPhones locally in November, which it will start shipping in January.

Hopes are high that devices made locally will be less expensive, mostly thanks to tax breaks Foxconn is negotiating with the Brazilian authorities.

Would you buy an iPhone now in South America? Let us know in the comments.