Do you often use your tablet or your phone to access the Internet? If the answer is yes and you live in Europe, you’re not alone: according to a study released today by comScore, the impact of smartphones and tablets is starting to show in the region. We took a look at comScore’s key findings.

Connected devices on the rise

Comscore’s study focused on France, Germany, Italy, Spain and the United Kingdom, Europe’s leading markets. According to its findings, connected devices (mostly mobile phones and tablets) drove 4.6%of total digital traffic in these country. Although these devices also include tablets, the traffic was “fuelled primarily by the use of smartphones,” comScore said.

Indeed, smartphones have been gaining ground over the last year: in the three-month average period ending in August, 91.4 million mobile subscribers across these countries reported using smartphones, up 46% from last year, comScore found out.

As for platforms, comScore noticed a paradox: “although Symbian continues to have the largest share of the smartphone market, its audience among all mobile and connected devices in current use was recently surpassed by the Apple iOS audience.” Remember the old phone you keep in a drawer while you play with your iPhone? Well, that may be it. 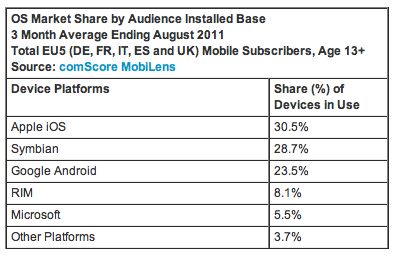 As a result, Apple iOS now accounts for 30.5% of connected devices in use (excluding feature phones and e-readers), with Symbian ranking second (28.7%) and Google Android third at 23.5%.

However, the composition of devices in use is quite different for each platform: while almost all Symbian devices are smartphones, tablets account for 16% of Android’s share. As for iOS, nearly half of its share is driven by the popularity of iPads and iPods Touch, comScore acknowledges.

iOS drives most of “non-computer” traffic 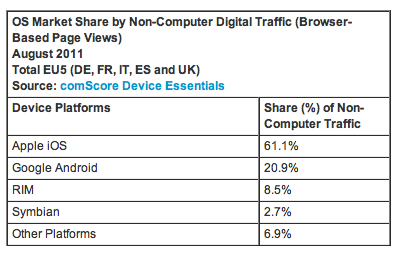 Apple’s platform’s domination is even more clear when looking at traffic numbers. Indeed, iOS drives 61% of what comScore calls the “non-computer digital traffic.” Although less than 25% of these devices are iPads, tablets account for 43% of this share.

As for other platforms, RIM’s and Symbian’s shares are much lower than iOS’ and Android’s. Symbian’s numbers are particularly low, “indicating that Symbian smartphone users were less likely on average to consume digital media on their mobile devices,” according to comScore.

The British like the news and other benchmark data

Finally, comScore included a table summarizing its benchmark data for August, which gives an interesting view on the different ways European users use their mobile in each of the five top markets:

Where you surprised by any of these numbers? Let us know in the comments.