Just in case you missed it, iOS 4.1 was released this morning much to the delight of folks waiting for some of the enhancements like Game Center, bug fixes, speed fixes for 3G owners, and HDR photos. If you watched Steve’s demo, you saw HDR (High Dynamic Range) in action, but the real question is whether HDR is worth it in the real world. As soon as my iPhone 4 finished the update process for 4.1 I snapped an HDR picture in my office. I immediately realized that an indoor shot is not the best test for HDR pics, so I went outside (and it’s a brilliantly sunny day in Vancouver, perfect for these tests) with my iPhone and my Samsung point-n-shoot to give you some real-world tests.

First thing that you need to know is what exactly HDR is and what’s going on when the iPhone does its thing. HDR pictures are a combination of at least three shots (under exposed, over exposed, correctly exposed) that are supposed to give you a really distinctive look and cool results on your shots. Essentially, you get some amazing contrast and often can “fix” the blow out you can get when there is a lot of light coming in, but you are in a shady spot. The best example I can give is if you’re taking a picture of someone in the shade, but there is bright sun behind them. The background will be blow out without much detail and the subject might be more than a tad dark. When I’m using my DSLRs I shoot in RAW format so I can play with the image when I’m done, but sometimes there isn’t much you can do to fix the image…that is unless you have over and under exposed image that you can use to combine to make an HDR image (or you have special HDR filters in your software). What the iPhone does is to take the three shots at (almost) the same moment then combine them together to make the HDR picture. You can also, if you want, keep or discard the “original” non-HDR picture. The default is to keep the picture, but you can change this in the photo settings.

So let’s get to the pictures. You can see all of the pictures and view a slide show of the on my Flickr set. First up is the non-HDR shot from my office: 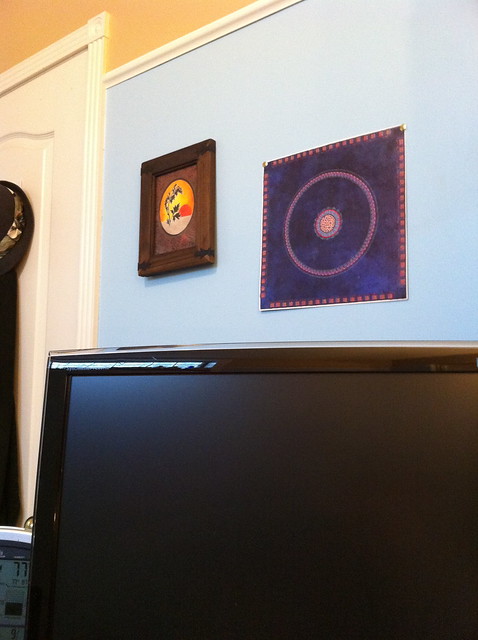 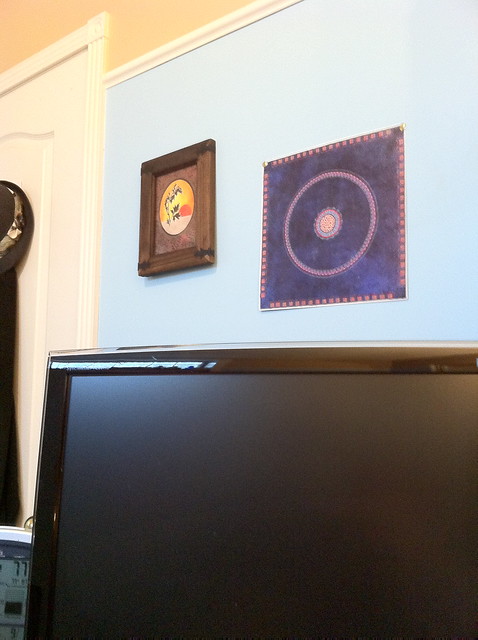 As you can see, the non-HDR is “better” in my office. That’s to be expected, so let’s go outside. First up, non-HDR, shooting up at the sky in front of my house (facing Southeast-ish): 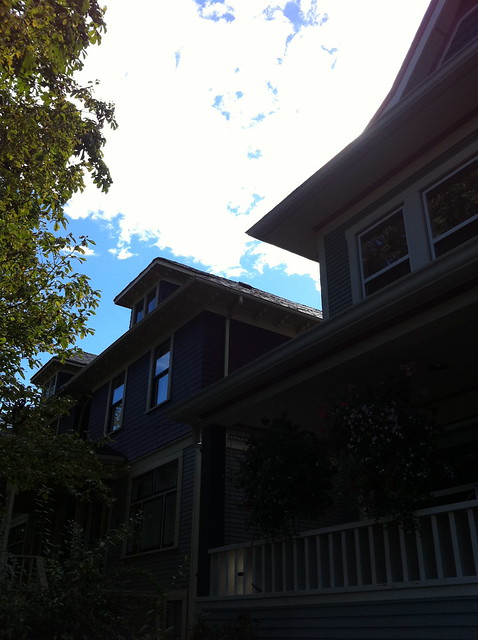 You can see the blow out in the clouds (I did this on purpose) and darkness, now the HDR version of the same shot: 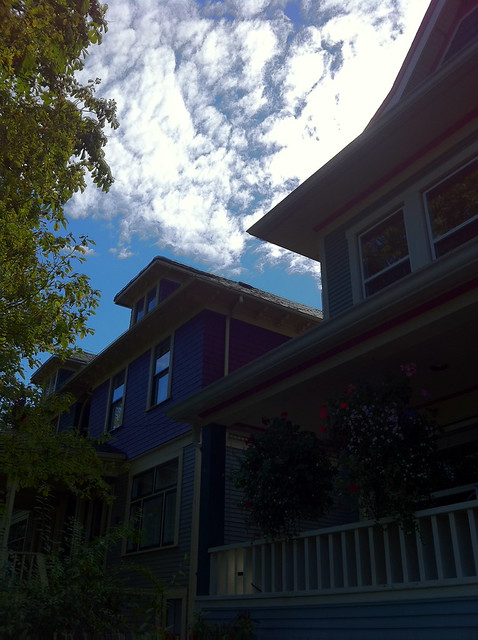 Wow, is right. The clouds look amazing and I’m getting some more detail from the houses. Now let’s compare with the point-n-shoot: 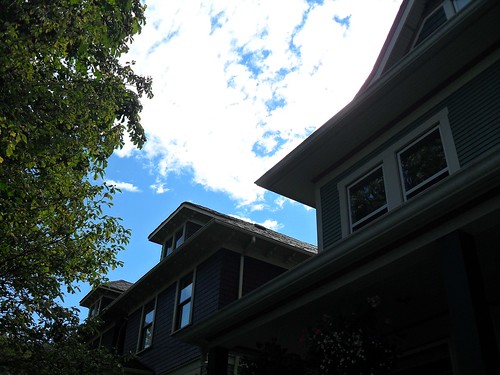 Now let’s look at a shot down the street, non-HDR, HDR, then point-n-shoot: 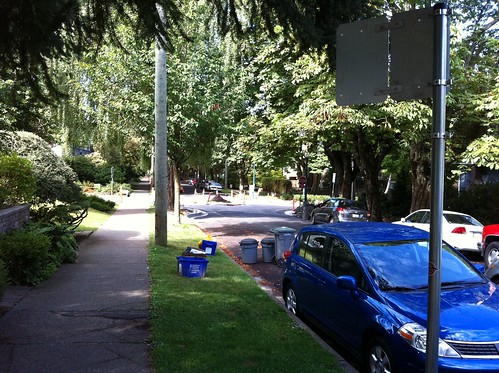 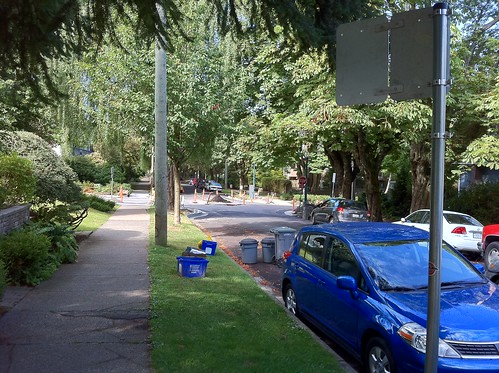 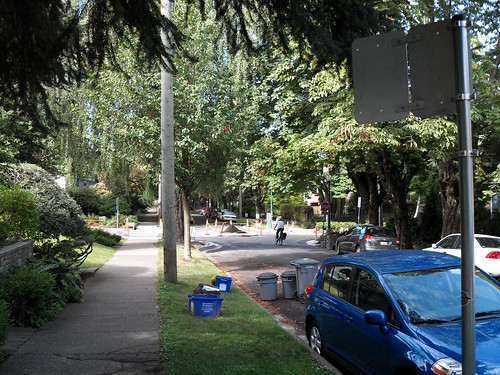 Pretty good results, I’d say. I think the point-n-shoot and HDR got the best detail. What about close-up shots? Here is a tree in my yard (same order as previous): 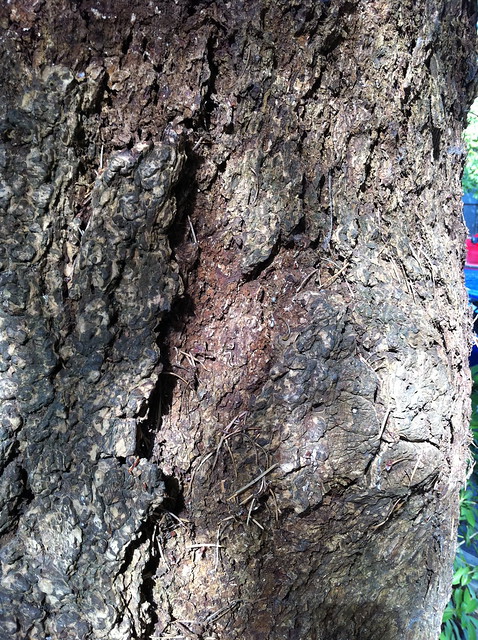 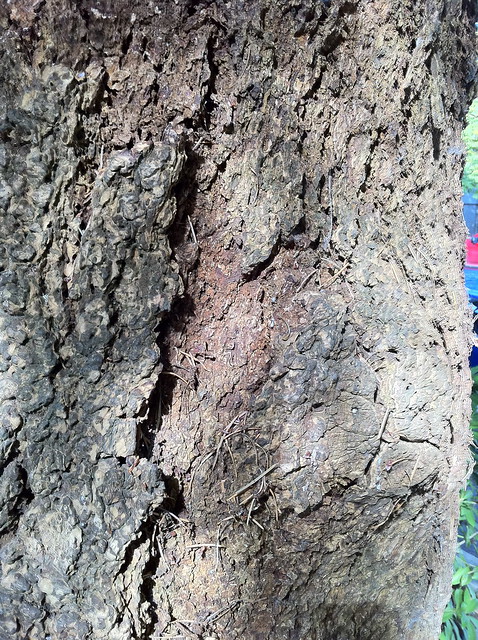 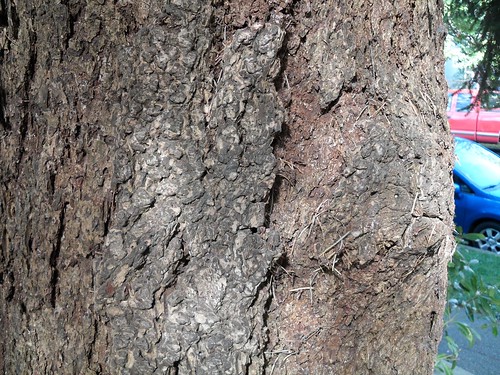 In this case I think the point-n-shoot did the better job. The HDR shot is way too bright, but non-HDR is pretty good. Now, I did absolutely no retouching or editing of these shots, so would a litte work in iPhoto, Aperture, or Lightroom (my fav for pro work) help? Probably. When should you use HDR? Well you can use it anytime you want, just leave Camera set to shoot HDR on all the time, but I think it’s the times when you have a lot of bright light behind your subject is when you’re going to get the best results. You should also know that it took about 7-10 seconds for the HDR image to be processed on my phone. So if you’re thinking of doing rapid-fire shots, don’t have HDR turned on.

This has been my experience thus far, but I’d love to see some of your example shots…post them in the comments and let’s see what this new feature can (and can’t) do!