This article was published on November 14, 2012

To coincide with the launch, invi has also announced today that it has raised $750,000 in seed funding from a range of international investors, including Horizons Ventures and Atlantic Bridge, as well as what it describes as “leading Silicon Valley angels” from the likes of Google, Nokia, Yahoo, Groupon and Spotify, among others.

invi itself launched out of UpWest Labs, an accelerator located in Silicon Valley.

The invi app is available now from the Google Play store, but is only compatible with smartphones and tablets running either the Gingerbread version of Android or higher.

A new texting application isn’t usually the sort of software that will get you jumping out of bed in the morning, however invi has taken a rather different approach to its nearest competitors. 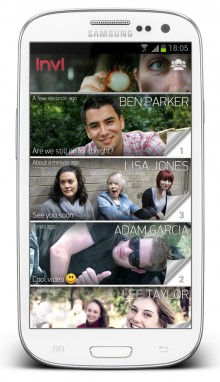 For starters, when you open the invi inbox everything looks incredibly visual. Rather than simply offering a bland list of all the people you’ve texted recently, invi has beautiful high resolution photographs extending across the width of the screen.

It still has all the important information you would expect from a texting app, such as the recipient’s name, their last message and the time it was sent, but the approach breathes life into what has always been a mundane affair.

When you’re chatting back and forth via text message though, invi has made some significant steps to try and make it feel more like an online instant messaging service. For example, photographs can be shared directly from Facebook or your own gallery, as well as other apps such as Twitter or Pinterest, directly into the conversation. Here they appear as full previews, much larger than the tiny thumbnails usually offered elsewhere.

“We wanted to take the well-known texting experience and transform it into a slick, visual and engaging one, while keeping it super-fast and simple as texting should be. invi seamlessly integrates with Android, making sharing into and out of it easy and beautiful without interrupting the flow of the conversation.”

Invi also has integrated video sharing. Whenever a YouTube link is pasted into the conversation, the actual video, complete with a player, can be watched without a loading another app. You can also continue texting while the video is still playing, which is really nice if you’re in a rush or want to comment on a specific part of what you’re watching.

Check out invi via the link below and let us know what you think in the comments!