Screenreach has launched a new version of its interactive Screach app, which aims to transform it into more of a social network for interactivity, and remove the need for users to be near a Screach-enabled digital screen.

We first covered Screenreach back in July 2010, and we’ve caught up with the startup on numerous occasions along the way.

Its Screach app is compatible with most smartphones, including iOS, Android and BlackBerry, and allows two-way interactions between a smart device and any content from other platforms such as digital screens, broadcast media, print, or simply within the app itself. To give you a use-case example, last year Screenreach teamed up with Ocean Outdoor, a UK ‘out-of-home’ advertising company, focusing on large format digital screens, banner and landmark advertising sites, to deliver a pretty cool marketing initiative for insurance provider Swiftcover.

Visitors to Westfield Shopping Centre in London were able to play an interactive, multiplayer driving game. The game allowed drivers to compete against each other using the Screach app, and it’s motion-controlled, triggering the user’s on-screen car when a steering motion is made with the mobile device.

We also reported that the UK-based company had struck a deal to roll its technology out across the US, it partnered with Bauer Media to create “next generation radio applications delivering location-based, interactive services,” and it was used by Newcastle United Football Club to let fans vote for ‘Man of the Match’, an award usually decided by a sponsor rather than the public at large.

Now, with the new version of its app, Screenreach aims to broaden its horizons and transform it into more of a self-contained entity that doesn’t always require external Screach-enabled content, and it means users can interact any time, any place.

Users can access and launch phone-to-screen experiences through the app’s website, transforming their device into a controller for the on-screen content, including interactive music playlists, shareable inspiration boards and multiplayer games.

One of the most interesting new ‘experiences’ is Jukebox, which is an interactive music platform that allows multiple users to select tracks, view the music videos, vote tracks up and down a shared playlist, and submit dedication messages – all from the app on their smartphones.

“We hope our users are impressed with the new version of Screach,” says Screenreach CEO, Paul Rawlings. “We’ve worked hard to integrate a great deal of feedback that we’ve received from users to provide them with the functionality to enjoy interactive experiences at all times to enhance the everyday activities that they already enjoy.” 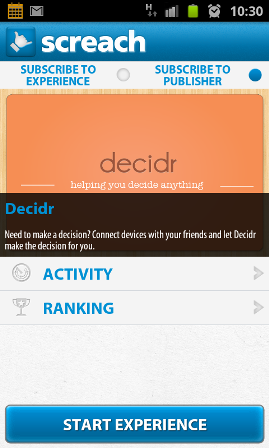 lets users find facts and information about the places around them, BuzzBoard, a community sharing experience that allows users to tag images and messages to their favourite venues, and Decidr, a phone-to-phone experience that turns decision-making into a social group activity. So if you’re indecisive, this lets you set up a decision group and, well, get a consensus to reach a decision.

New features also allow a user to create their own interactive experiences which can be shared with friends and delivered in real time to accompany such things as a user’s favourite TV programme. The new version of Screach is available on iOS and Android now.